I really wanted to create a tutorial showing folks how you can make photoreal explosions with the blender smoke simulation, as I’d achieved a few half realistic renders, but after much effort and little results, I’m callin’ it quits.

I’m curious if anyone else believes that the blender smoke sim should be turned into a fire sim.

If you’re doing something unbelievable, you need as much believability in every aspect of your production as possible. The blender smoke sim is great for smoke, but I’d love fire.
It would save me and my neighbors a good deal of danger =) 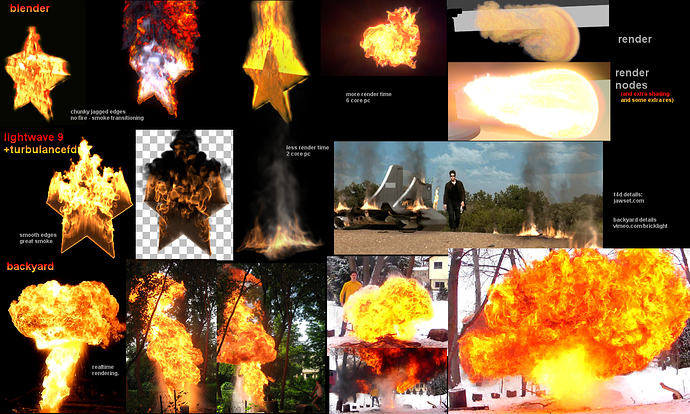 Yup. That’s about as good as it’s gotten. It works for distant explosions, but not quite the fire I’m looking for.

For some reason, after I bake my simulation, smoke never shows. I’ve done it again and again…

For some reason, after I bake my simulation, smoke never shows. I’ve done it again and again…

did you forget to add the voxel textures?

Blender Smoke Simulation still needs a lot of work coding-wise. I hope the issue will be tackled with Mango…

Yea Paul and Gottfried (didn’t you work on the smoke sim BTW?), I totally agree that realism is not possible at the moment. I tried so so hard to do an explosion, but I ran into two huge limitations:

Although the smoke looked good, the fire transition part had the terrible jagged edges you mentioned:

Second, the color could not be defined by time, only by density. This is super important because in explosions the inside is what is on fire, while the outside is more smoke. This is impossible to replicate using density.

Every time that I try to use smoke, it keeps disappearing reappearing in the viewport, is this a bug?