First brush with a render farm.

Last week I read on the Indigo website that The Ranch would become the first professional render farm to support Indigo. So I unearthed this older (Blender-made) scene, which I never quite managed to render properly on my Quad. Too much glass, too much sunlight, too many alpha leaves, too many polys (well over 2m).
I first ran it through the farm (more than 400 cores) for 15 minutes and it came back so clean I couldn’t believe my eyes. Today, since the beta period had ended, I decided to run it as a paid project. This is what came out after an hour of rendering (downsampled here from 2400x1800 to 1024x768). The guys at Ranch liked it so they picked it as their benchmark scene, which means you can see a full-res version on their site.
Clearly not everyone can afford to run renders through a farm. But anyone who’s making a bit of money with their images should really consider this, I think. I know I will. And for keen users of Indigo, this could be the end of this long, long, long wait for the render to clear.

(PS: I’ve got no financial interest in Ranch. They just grabbed an image of mine they liked and I didn’t get a free ride or anything in return. So this is no advert. Just pointing out something that had me crying with joy and could be of serious help to some people here.) 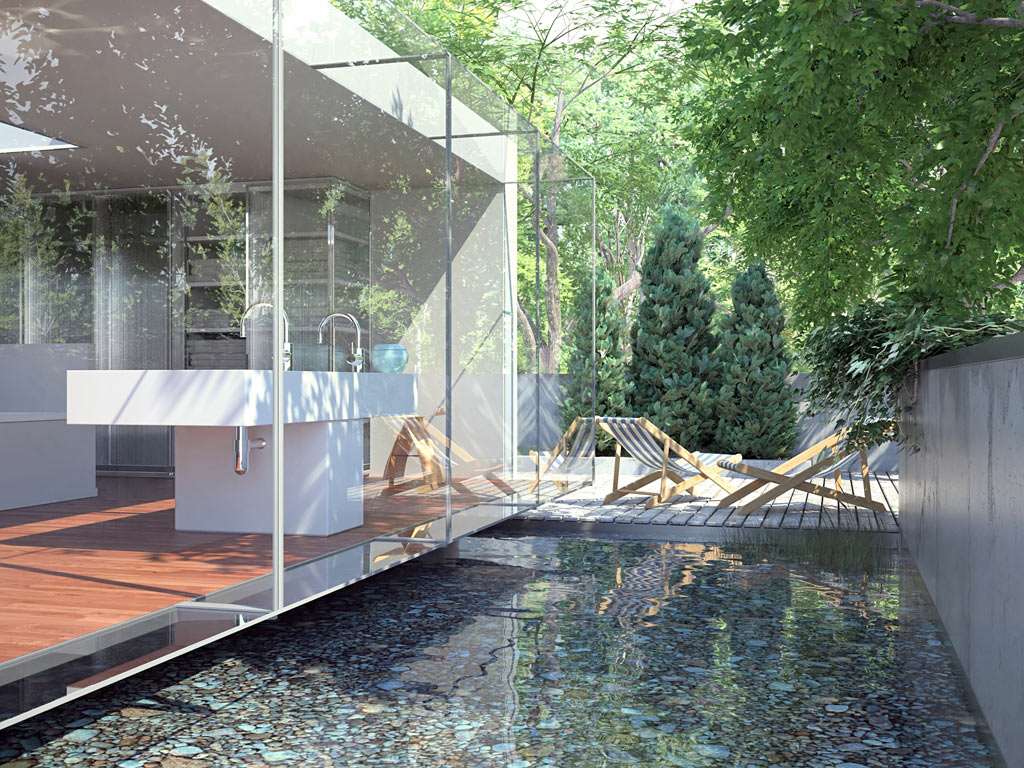 You sir, have created one of the best Indigo images I have EVER seen. I have one tiny micro crit though, The rocks in the water throw the image off because of their flatness. Other than that, this could pass as a photo.

That is so cool. Can’t believe how real it looks. So the question is - did you just use one sun lamp to light it or a massive lighting rig? I suppose the textures have a big roll to play. But if i want to incorporate live action with blender i’d have to achieve realistic lighting and at the moment cant really accomplish it. Any tips/dumps??

Very nice on that. And the Ranch is great speed.

Nfollmer: Hey thanks man. That’s very kind. You’re right about the pebbles. But this could soon be a thing of the past. The latest beta version of Indigo incorporates sub-pixel displacement. Once this version makes it into stable, the Ranch will upgrade too.

Dundaglan: Thx mate. Much appreciated. This was only lit with one sun. Indigo does the rest. Which for lazy guys like me is a real treat!

You know with speeds like that, maybe someday someone could do an Indigo Animation?

Oh yes. You could definitely do that with the Ranch. But you’d need a BIG wallet!!!

Oh yes. You could definitely do that with the Ranch. But you’d need a BIG wallet!!!

No seriously though, I am getting off track here. I think I am going to have to break out Indigo. Maybe even upload to this farm.

You should. Have a look at the Indigo forum. Some guys have rendered completely crazy images through the Ranch during the (free) beta period. Lar111, for instance, had an entire scene immersed into a dense SSS fog medium (here: http://www.indigorenderer.com/joomla/forum/viewtopic.php?t=4420) something that would take weeks to render on an average desktop.

Hmm interesting. So whats the difference with indigo and blender? why couldn’t the blender renderer accomplish this?

Indigo can be used from within Blender thanks to SmartDen’s great Blendigo plugin. In fact it’s easier to use than BI because there are very few settings. Indigo’s an unbiased or “brute force” renderer, which means that it does not use any tricks to speed up the rendering process and given enough time will always converge to a physically accurate result - very much like a photograph.
The downside of course is in the much higher render times and the fact that some very complex light situations or scenes may retain some noise despite long render times.

Excellent image! Only few giveaways that it’s not a photo. I love the foliage. It’s far more dense than what you see in many CG images, which is more realistic.

This sure deserves 5 stars!
//Mathias

Wow BbB, that’s cool! You didn’t mention the cost though. How much did it run you for that render and what is the charge based on?

As for animation, I don’t know of anyone doing anything with Indigo. At the last Meeting of the Michigan Blender Users Group, Philbo was telling us about a professional production house that wants to use LuxRender for the animation of a TV series. LuxRender is another unbias renderer and is open source. So I guess you can use unbias renderers for animations given a large enough render farm and budget!

[edit] Oh… and I didn’t see a link posted anywhere, so here’s the site of anyone wants to check it out

The Ranch is a high performance, affordable and automated CPU & GPU rendering service. You can use our render farm from anywhere, at any time (24/7).

Wow, thats awesome. And good for blender + indigo advertizing.
I think sub-pixel displacement is needed for the tree in the background too.

There are some nice places over the net to publish photos

Great scene for sure, as mentioned, maybe some bump or better, displacement on the stones in the pool but it would make the scene more heavy.

Thanks guys. Yep, Enrico, the pebbles are pretty crappy right now. (By the way, congrats on making it into 3D World again!)

The cost for the 15min render was $70. The one-hour render was done by the Ranch people for their benchmark scene so I didn’t pay for this one. It would have been $200+/-.

But one hour, even on such a difficult image at such high resolution, is overkill, I think. The difference between the 15min render and the one-hour one is noticeable but perhaps not worth the extra budget. Depends on your scene really. But I guess most scenes would look fine at 2,500SPP, which is what I reached after 15mins.

Your trees are fantastic! Are they made with a script or hand-modeled?