By the looks of it, all AMD has to do to win the next GPU face off is to have drivers that do not suck. While they are going to a flexible MCM design with RDNA3, Nvidia will rely on brute force.
Twice as powerful but double energy usage - Nvidia GeForce RTX 40 graphics cards (guru3d.com)

Double the power, but double the watts and a potential fire hazard. It does not look like any notable architectural improvements will be offered if this is the case, just heavier engineering to help the cards survive a much higher level of voltage and heat.

Of course, that is providing you can even run such a machine in your home, a higher end two GPU setup may not even be possible because of the limits in what a wall outlet can provide (so you are talking about thousands of dollars worth of home wiring upgrades before purchasing).

The only good news is that oftentimes, previous generation cards from the same vendor drop in price significantly after the new models are released. The RTX 3060/3070 cards might actually be at MSRP by then.

To conclude, the ball is in AMD’s court now, whether they run with it remains to be seen.

By the looks of it, all AMD has to do to win the next GPU face off is to have drivers that do not suck.

That’s going to be tough since they’ve never accomplished this.

You could always make a headless machine, and plug it into the dryer socket down in your utility room.

Or put it outside: 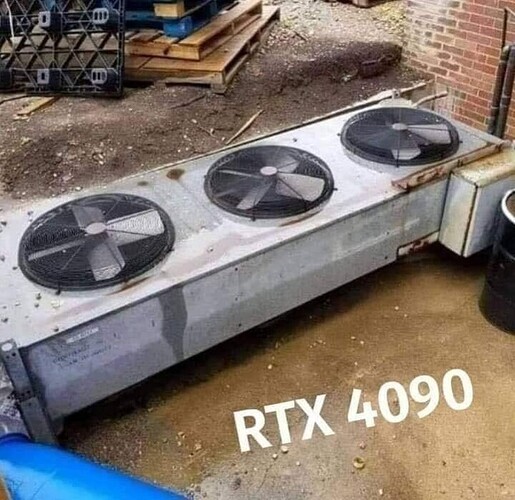 You remember the story about that kid who built a nuclear reactor in his backyard?

…we could really use his expertise right now.

What is surprising is that Nvidia is not even attempting to avoid creating their own version of AMD’s Vega disaster (which was one of the worst GPU architectures in the last decade). Now AMD is piling R&D into cutting edge chip building tech. while Nvidia becomes the one brute forcing everything.

Of course, there’s speculation that AMD will also push their MCM cards to an extremely power hungry state if the gaming audience is now fine with 1 kilowatt systems (for nothing more than to finally give the Radeon camp their chance to brag about the FRAMMMEZZZZ!!!). What about those of us who just want a solid card for heavy creative work that we know will last for many years?

Well I guess you can always go Quadro / Radeon PRO. If you have the $$$.

Don’t get a quadro, get an RTX geforce and you’ll be much happier with blender.

If you are doing oil speculation or heavy machine learning, the quadros might give you a bit of a boost, but they are built for stability at the cost of performance. Paying lots for low performance isn’t ideal.