Hey all, I’m new here and have just started blender about 3 months ago. This is my first real model/scene. Any comments and critiques are welcome 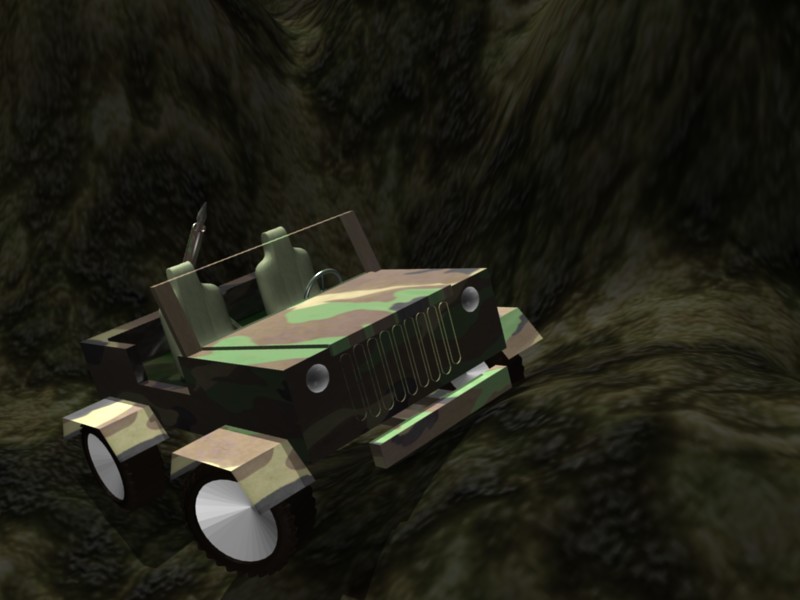 Hi - I like your scene, I’m new too so I can’t speak too much for the blender side of things, but I’ll give my tuppence.

I think it might be useful to consider the contrast in size between the jeep and the texture you’ve used for the rock - if the jeep’s full size (rather than toy size), reducing the size of the texture might help to make the jeep seem large. I guess it depends on the motivation behind the image?

Nice first model, BlenderRocks! Looks low poly, probably would do well in a game. If you’re going for a GI model, I’d ditch the bucket seats for uncomfortable square cushions. Welcome to BlenderArtists.

nice job and keep on blending!

The Blender tutorial Jeep, I made one but not as detailed as yours, nicely done!

you did it from the tutorial on wikipedia… i started from there too… nice work!

What’s with the wheels? Especially the front-right wheel seems to be strange.

I was kind of going for a realistic kind of model, but it is definitely low poly and done with the blender internal render from the tutorial on Wikipedia with a few tweaks and added stuff like a steering wheel and grill. It could definitely be used in a game though.
Lukuspukus-Thanks, I will try that.
Orinoco- Why would I ditch the bucket seats? For render times?
link007- The front wheels are turning left, which is why they seem to be strange.

Here is another render that I did. I couldn’t seem to get the background colour right, any suggestions?

Great start. Keep it up.

Thanks FuzzMaster, I plan to keep it up and produce some more work sometime in the future.

I really like that second render! Great job. I haven’t had the courage to tackle a vehicle yet.

Thanks Jimtuv, it’s kind of tricky and takes some patience but it’s well worth it.

I was also wondering, how do I achieve the rusty/worn/dirty effect in some spots?

To change that background colour, you need to look at the material settings for world? Go into the material panel and click the little Earth icon and you can set the colour there. Sometime down the line you could look at rendering using the stars option or putting a sky dome over your whole scene?

To make things a bit dirtier, you need to look at applying multiple materials rather than just a texture image or camo pattern. The “Part 4 Materials” video from Kernon at http://blendernewbies.blogspot.com/search/label/Pretzel has a section on “multi-layered materials”. Ok, he’s modelling a pretzel but he also has to make the surface grainy, bumpy, shiny in parts but matte in others.

Thanks, I will consider that.

Nice model, Looking forward to see more art from you.Just keep it up.

Ha, maybe a driver will come later but first I have to do some more work and touchups on the jeep.

really nice render for first times … about that driver thing i dont think that its a good idea as its the hardest thing in blender which will not be as good as the car so it will spoil the render , and about your scene for making it better use some Hi-Res textures with some trees around ((its ok if you borrow some models into your scene but you have to say its not yours)) . and some river will make it feel like its a movie screenshot or its in a war , and some tweaks into the car will also be good , add some cylenders in the place of screws and cover the back side of the car .make those head lights transparent and if you can add some smoke effects . “IMAGINE HOW THE LAST RESULT WILL LOOK”
Edit :-BTW its better if you move it to FC or WIP threads
JimTuv : Try modelling vehicles ,its the easiest thing to do in 3D and its so fun.

@Ge-Force- I originally posted it in focused critique, but it got moved. Ya, I’m going to do the jeep and some other projects before the driver comes.
Thanks for the ideas, maybe I will try them when I get the time