The name of my game isn’t final.
It will be more about exploring the many different worlds, then just shooting everything you see. or you can do that if you want.

Just showing what I’m up to and how far I have gotten.
as you can tell I’m going for more of a cartoon style. I’m trying to avoid making it look realistic most of the textures are just place holders until I finish the hand drawn ones. the characters will all be goofy and such.

this video is just showing an early look at the world (other planet). netherworld or whatever you want to call it. yeah it’s not scary yet. not that location at least.

this is a modified Gouger, a mining laser use by slaves.

a minigun nothing more nothing less. 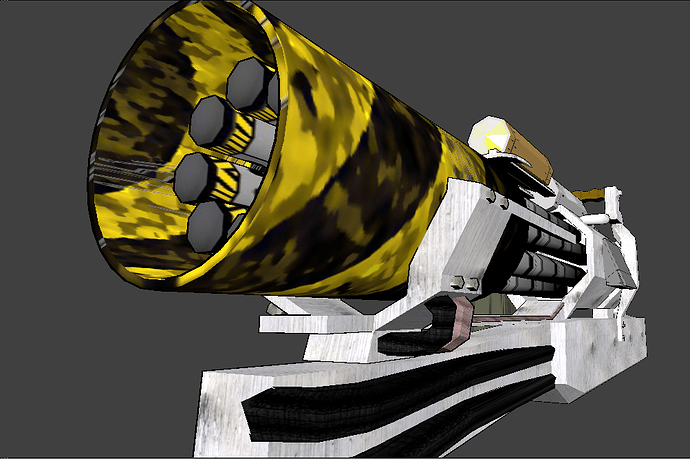 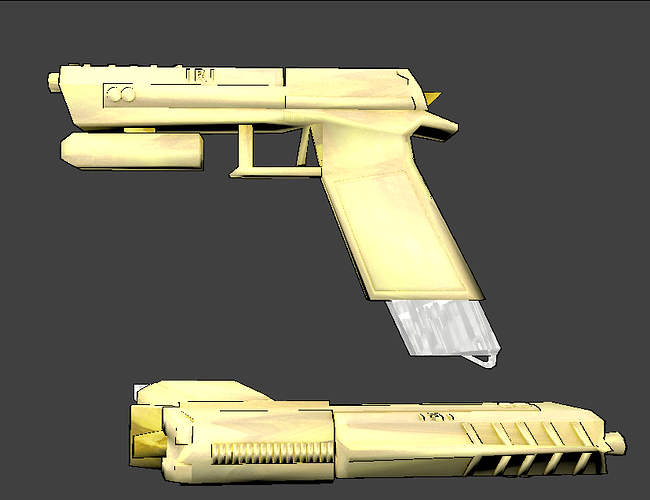 I wanted to say that the Textures are partially really ugly (in the Environment – the Weapons look good!), but then I read that they are just Placeholder. And even more important: That you are going to make handdrawn Textures! That is great, only few People on this Forum really would go for a handdrawn Style, so I am interested in what you will come up with.

I actually dislike such strong Celshading. Maybe it will work for your Game though, I cannot judge that right now.

Thanks I have allot more weapons to show off but they aren’t complete texture wise. but all of the special weapons will be ether gold, copper, or silver.

I have to put all those years I was in art to good use. though the classes mostly focused on realism. no one cared for drawing cartoons.
but there is no way I leaving some of those textures in there in that level shown.

and what I’m most afraid of is how it will fail. because it won’t play like other shooters, and the game will be just silly. but it’s all about the characters. you will think the main character is on a acid trip. that’s a little clue. the game may fail for that reason.

this is the FAMAS I think. will be calls ar7 in the game.

next is the scar. in my game it will be call scab.

next it doesn’t have a final name yet. 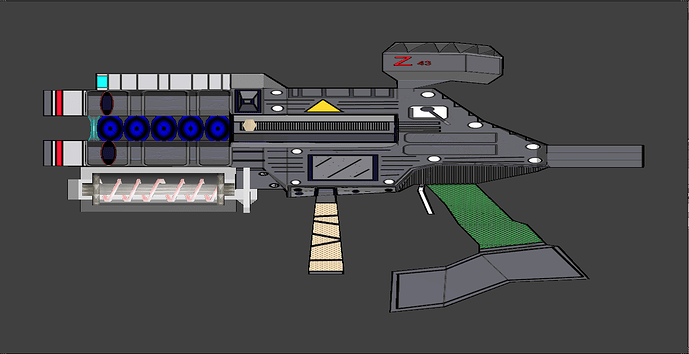 Wow. I’m extremely impressed. Your artwork is REALLY good. Looks like you have some solid foundations for gameplay already. A couple of suggestions that may help but are totally optional: 1) Your HUD looks a little crowded. Maybe you could simplify it a little (even just by making all the HUD elements smaller). 2) The reticule is an interesting design choice, but maybe lose the big red arrow? It’s a little distracting. 3) The walking animation seems a little rough. I don’t know if you’re still working on it, but I would recommend making it a little less bouncy. 4) For your environment textures, I know they’re not done, but I recommend baking the *goodstuff. 5) Make the game less awesome. Your making the rest of us look bad! :evilgrin:

It’s obvious that you know what you’re doing as far as programming and art design goes, so I’m sure you can achieve your design goals for this game. Just stick with it! (Oh, and this reminds, Borderlands 2 comes out in September everybody!)

yeah the HUD has changed allot. come to think of it the big fading greyish outline is a little annoying.

the hologram thingy is what the weapon uses. instead of having a standard reticule it will have the hologram. I guess i can make the arrow a bit smaller. but other weapon will have their own unique reticule.

I was using the test rig just arms, and gun. the full body rig isn’t done yet, it bounces way more. it works better then the old full body rig. it isn’t really animated all that much, it sort of works like those string puppets.

I’m not all that with python.

This is one of the first models made. this is what it looks like as of now. may change again I don’t know.
I got rid of the plain looking laser beam and put in a animated pixelated one. 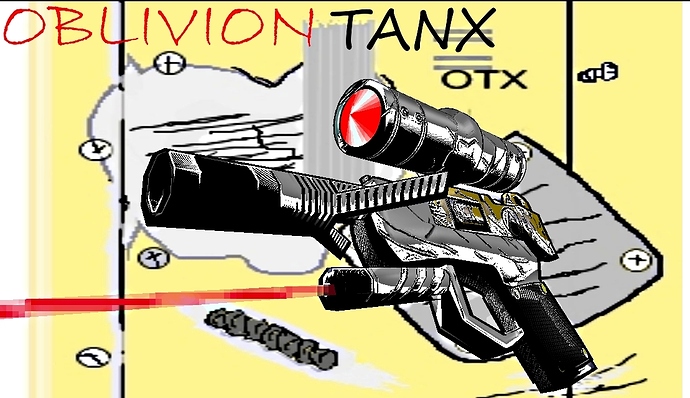 the background makes it pop out more then the solid grey one.

nothing special just a few pics of other environments. 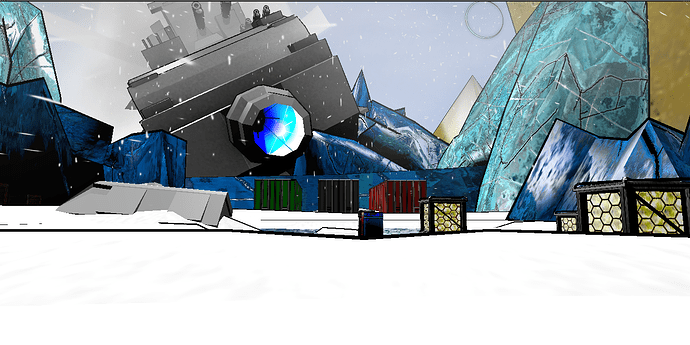 what I’m also trying to do is add back tracking, and hidden zones.

oh man i love the hand drawn textures freaking awesome, it just so happens i just got done watching tank girl before i logged back on here. in all honesty i look at it like this we have had cartoon y games that make it (don’t know why) we have had visually stunning games flop on release. but this my friend is a work of art, not to say other games are not works of art, we all know the time and effort we have to put in to a game, but this one is truly a gem! by breaking away from what is standard you have created something beautiful and i have a feeling that many people will copy this style. love the medium you use my friend.

I’m much better with pin and paper I have far more control, I can barely draw with a mouse that’s not meant to be that accurate. and I have no drawing pad.

I’m making it look like a simple carttoon with simple colors, nothing on the lvl of borderlands or the darkness 2.

though the gun models have different styles.

and I wouldn’t say copy. they can do any style they want. and I wasn’t the first.
I just like it when games have different looks, some of the people I used to know only cared for “realistic” games.

I got some ideas from Metriod, and Turok2 and 007.
the game was at first going to be “realistic” but I ended up making it cartonish, not because my computer sucks, but because it fits it more, and to many people and devs use the “realistic” style to much. I will be able to put more emotion and weirdness in it. I think that’s good instead of mr.ego man, or I cry to much man.
I trying to make the make you fell very small. at the same time have a huge amount of environments.

Are you working on this yourself? That’s a lot of work for one person!

I’m working on it by my self, it’s been slow, the game changed allot, and I tried getting some teammates to do some of the coding. but I don’t have anyone else.

I do use other peoples scripts. everything else was done by me. and the rig I’m working I’m trying to make it were it will cut the amount of logic in half, for FPS type games. some of the scripts cancel out some things so I had to do some things to were it will work with the script.

and here are some more things.

this one is just a test area, I’m just making it play like a First person Mario galaxy, at first I tried this it wouldn’t let you use mouse look then I added a few things to the rig and now it works, not like I wanted but now you can use mouse look. only the sky world will work like that.

still has a few bugs. I’m kind of popcorning around with the game.

Looks pretty solid, keep it up!

A death animation. you die a colourful death. I was kind of going retro with this one with the stars and stuff, but not all deaths will be like this. plus I worked a little more on the smoke. 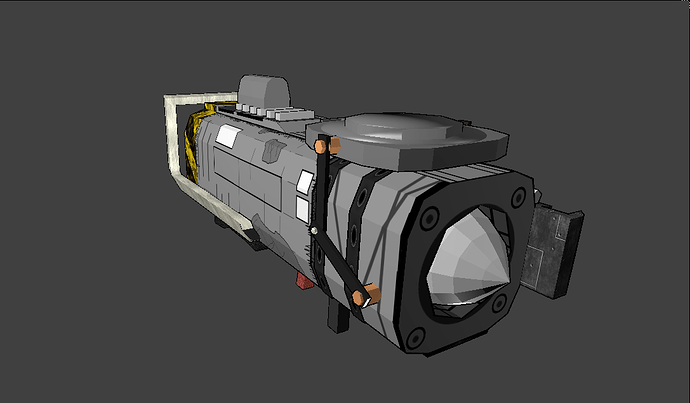 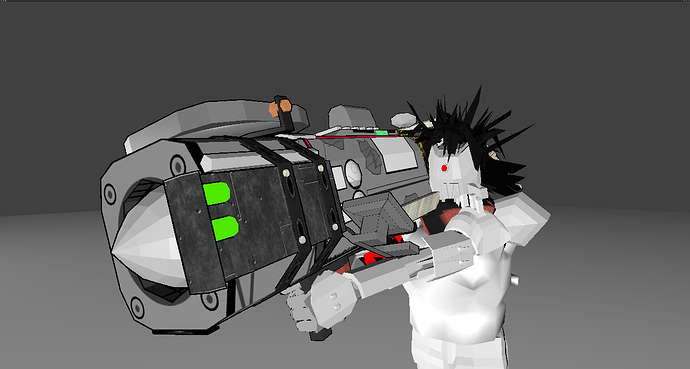 lure :evilgrin:
well the main idea was to have a fake dropped ammo/health pack or something. cast that sucker out, wait, click, boom. it’s just an idea if I get far enough to add multi player. 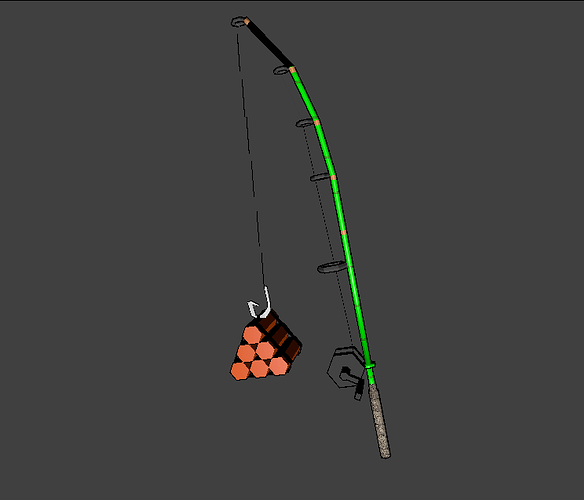 ghost
a common life form. with a huge mass attached to it neck. 89% of it’s energy is suppressed. it still will one hit kill you even with the power down. don’t be stomping around. be a ninja. it hates sound. 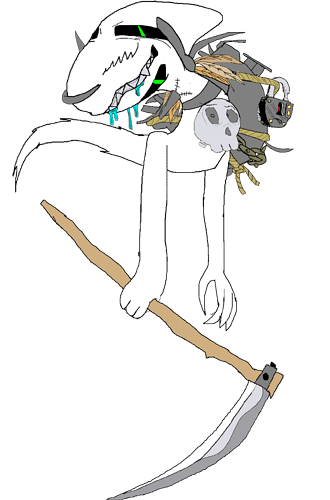 now I know everyone would rather see game play. I haven’t really gotten to far with that I hit a few snags that I can’t get around, so I’m just making a ton of model and props.

haha well i love the idea bro,and ur style is very unique too!
keep up the good work

The graphics are AMAZING! I am verry impressed. Slightly disturbed by a story where the player thinks their character is on an acid trip, but otherwise it looks great. Making a game story focus on the characters is (in my opinion) a very good plan. Graphics look great and exploration gameplay is usually a big hit(one of my favorites;)