Hi guys,
I’ve been playing with blender for some time, but only doing small stuffs and I wasn’t really pleased with them.
This is my first “bigger” project which I’m not very shame to show to the audience.
I hope You like it 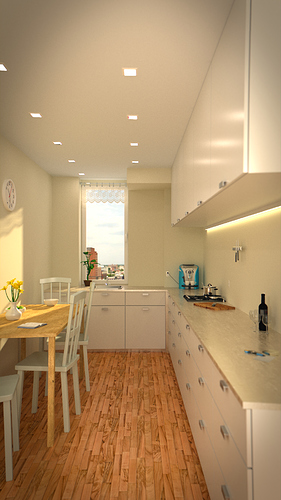 Very good for a first render.

I was an artist in the ArchViz industry for years and don’t plan to do that any longer, so I’m gonna share my knowledge with you since we prolly will never be competitors

1- Scale is very important. I feel that some of your objects don’t have a correct scale. Don’t get the scales ‘approximate’ get them EXACT. Some millimeters off are OK. 1cm is already too much for a small object like a knife. Also, proportions should have the same treatment. The scale should be correct in all dimensions.

2- Identification with “popular” real world objects is very important. For example, let’s say the scale of the floor is technically correct according to some real floor; but it doesn’t look correct to me because I’ve never seen something similar in real life, so, that will draw my attention. A big secret to make realistic scenes/renders is to have the viewer “identify” with the objects immediately. In the studio I’ve worked, we even would discard some specifications and replace stuff by “popular” props and materials so the viewer won’t be unfamiliar with anything in the image. That includes for example, using the most popular appliances and furniture. By “popular” I don’t mean cheap stuff that everyone have, but stuff that people will immediately identify. That’s why most of these renders have mostly the same chair models for example (a few that come to mind are Tulip (all variants), “S”, 3107 and DSR/Eiffel. On a more “armchair” style, you have the Barcelona, Eames Lounge, Florence, LC2, LeCorbusiey (last 3 alike), Swan and Ball. If you’re into ArchViz, you gotta learn that kinda stuff and know the “appeal” they have. Also, you totally need a library with these objects in a ready-to-render and totally photorrealistic fashion. That’s a big reason why I quit ArchViz :P.

3- Mind your sampler. I see ugly artifacts on the lamps and on the tap. Catmull-Rom is very popular in ArchViz but tends to generate that kinda artifact. Mitchell-Netravali also isn’t very “smooth”. Vray users 95% of the time use CR, but some/most of the real pros use a smoother sampler and try to get a result that can be compared with the output of a professional low-noise DSLR. While we’re into photography:

4- Correct exposure and lighting is of key importance. The background looks somewhat believable, except for lighting (the natural light in the scene doesn’t match it very well) and exposure. Unless you have many ‘full-wall’ windows, in a daylight scene you’ll want to “increase the exposure” of the BG. It looks a late afternoon in the scene. The scene has direct sunlight, and although you can see the sun is about to set, it still should illuminate way more than that compared to the lamps, or if it’s really late, and the building is on a privileged spot that receives direct sunlight at that time, the light color should be much more hotter so that’s more obvious. That goes back to #2, I don’t identify with that lighting at all, either the lamps are too bright and similarly colored compared to the direct sunlight (you may have very bright lamps, but you don’t see that often irl) or the sunlight isn’t as ‘orange’ as I would expect it to be, compared to the artificial lighting. If you’re using BB temps, you’ll want to keep the very late afternoon sunlight below 3kK. Please note that everything here is relative, you have lamps intensity, color, exposure and white balance.

5- Bevel everything. Does the table have beveled corners? If so, you’ll want to increase them.

6- Realistic materials please :). The thing that really annoyed me in the scene are the materials. 6.1: There’s too much saturation in the plants, coffee machine, and clock second hand. 6.2: Get transmission right. The curtain and the plant leaves should totally be ‘lit’ on the other side when there’s direct sunlight like that.

7- Use photography effects with caution. The vignette looks extremely odd in that scene… I guess it’s because it’s ‘scaled’ to the image, and that totally never happens in real life because the shutter opening is always approximately circular, so the vignette ‘circle’ is always 1:1 no matter what crop or aspect ratio you have. If you crop a real photo you’re also cropping the vignette. If you increase the contrast you can see how it’s very wrong as in the picture I’ve attached:

In ArchViz vignetting is important because wide angle lenses are widely used, but it should never be abused. Also, you only want to reproduce natural vignetting, and not optical/mechanical vignetting. Some cheap RL lenses have lots of vignetting due poor design and glass quality along with slow blades when the exposure time is really short, you don’t want that. If you were photographing that you’d use a long exposure with low ISO, so blades speed don’t matter much, and don’t forget that you’re supposed to be trying to reproduce top quality real life gear, what rarely produces obvious vignetting, especially after a crop which is very common.

8- Post-production is a thing in ArchViz. Sure, everyone tries to get a perfect output directly from the renderer, but you shouldn’t feel bad about using an image editor to “burn/dodge” some parts of the image, or even fix something that went wrong so you don’t have to render it again. Especially for foliage, a little bit of “burn/dodge” is very common to enhance the appearance. Besides that you’ll also want to decrease some saturation and fine-tune the results with some image adjustments. ArchViz images generally have a washed-out look and a bit of bloom.

I hope that helps a little. I’m preparing a blog post to give away my ArchViz knowledge but I never stop changing it and I just wanted to know if my points are really helpful or if it’s like common sense.

Unbiased(like) rendering isn’t really popular in ArchViz, and Vray is still the king I guess, when I worked I used Max and Vray (although I’m a Blender user for more than a decade now) but I see that pretty decent noise reducer is coming for Cycles, and with that I guess it’s going to be extremely suitable for that kind of rendering. 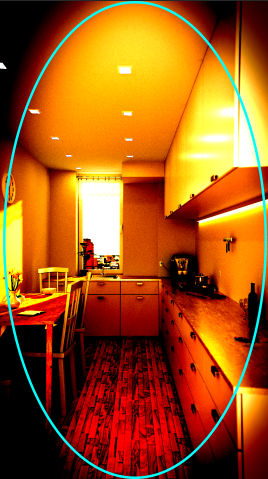 First of all thanks for Your response. I was afraid that it was so ugly comparing to many masterpices on this forum that no one will even say a word about it.
That was my first try in making whole room instead of single objects. But after reading Your “wall of text”

I have to agree that this render could be better.
Before sharing next picture I will compare it to Your “checklist”.
One again thanks for advices.
Regards.