ok, my name is Luke Mark Brady. im currently taking a games development course at college and ive taken quite well to the whole 3d side of the course, ive been learing blender for around 10 months or so mainly doing various tests with the 3D engine a have to say i love it!:o
anyway ive just finished my first serious project, im still yet to come up with a solid name but the render is complete.
im looking for some serious feedback, anything im doing wrong / correctly, or just any tips and critique
many thanks

however, there seems to be something about the needle and string… the string looks a bit rubbery, and maybe adding a bit of reflectivity on the needle would help

i’m far from being an expert, btw, they’re just things that stood out to me

I like the theme of your render. The character it is quite good. In my opinion, and at first glance, a few things stood out.

The hand holding the needle, it appears that it going through the mesh.

The mesh itself (or skin of the character) seems quite flatish, and quite un-interesting. I suggest you play around with the bump map some more to avoid the stretching.

The feet could be a bit more cute and shoe like. To me, the character is kind of creepy and menacing, so a little more emphasis on the cuteness factor will add on the mystery of this piece. All the best!

EDIT - you may wish to do a search on this forum by a member called Tictoon who did something similar called “Sackboy” or something rather.

im quite a noob at blender but it appears that the thread when looping over the top of the needle seems to be passing through the needel a bit, other than that its brilliant

atm i only have 2 issues with it.

by that i mean the texture looks very detailed and rough, but the model is very smooth. It especially shows on the arms where you would expect the fabric to be rough.

Your camera is very close to the model, that way you need to have more details on the edges of the sackboy. Take a look at this macro pic of a similar fabric:

other than that, its great, especially well-textured.

Just wanted to say I liked your render, you did a good job with it.

I disagree with the comment that the Character’s texture was uninteresting. I think it’s very good, I like the appearance of dirt and wear that you gave it.

Nice tip about the particle system.

Since you asked for critiques:
I noticed a couple people mentioned that the needle and thread didn’t look right to them.
Maybe that’s because there is much more thread coiled on the floor, than hangs down on the opposite side of the needle’s eye. The weight of the thread on the floor, should pull the rest back out. The result is that the thread seems a bit stiff. Making the leading thread a little longer and just letting it touch ( or almost touch) the floor, would probably fix it. If the needle were tilted a little, toward the eye, or there were less of it on the floor, that might work without lengthening the other side of the thread as much. Hope that was helpful.

I think I’d do the focus just a little bit different, sharpening e.g. the needle. (“Why is the needle blurred while the piece of thread attached to it is not?”) And, maybe, pull the camera back a little bit, just so the little guy’s not quite so “in my face.”

You might wish to consider re-framing the background. The guy’s head is framed by those boxes. Those boxes are as bright as he is. Do they really have to be out-of-focus? (What kind of macro-lens are you supposedly using, to get a focus-plane like that?) And so on.

Shane did 9 in college…keep it up! love the burlap, and agree it should have fuzz.

The needle should be the chrome material from the standard library with an env map. right now it looks like white plastic. 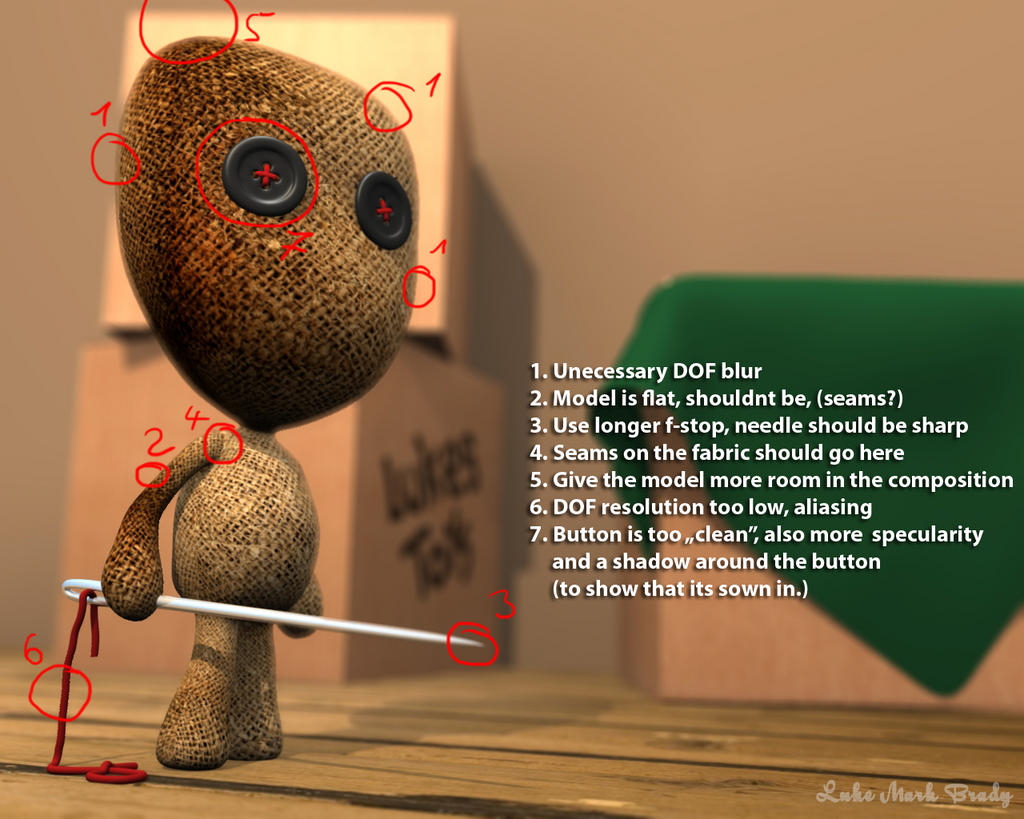 thanks guys, didnt expect such a response. :o
thanks for all the feedback both good and bad. really helped alot and now working on an updated render.
big thanks to ADAM TM :o
that image you created really helps me out, thanks for putting the time in to create it =]

thanks guys, didnt expect such a response. :o
thanks for all the feedback both good and bad. really helped alot and now working on an updated render.
big thanks to ADAM TM :o
that image you created really helps me out, thanks for putting the time in to create it =]