This is my first cycles render, and I’d like to know where I need improvement. 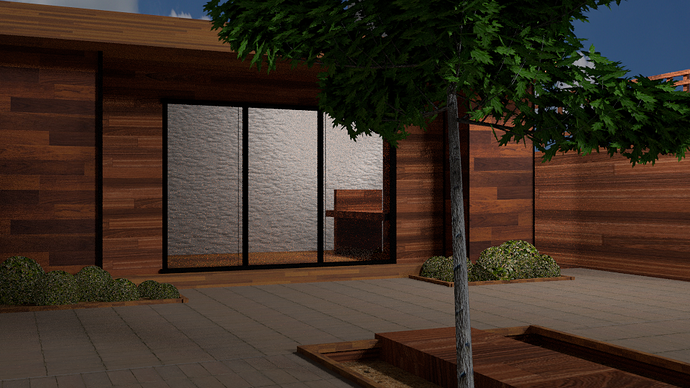 Sir, if this is your first render, you’re getting along pretty well. The bushes look quite fake, and the scene could have used more samples. Keep it up!

I don’t know how to comment on it without sounding mean because everything needs improvement, including the image size that is the default 50% of 1920x1080. First render so it’s alright.

Everything points to the middle of the image so that’s where the viewer will first look and it’s confusing and boring. Not sure what that is and knowing wouldn’t help. If it’s glass, it’s likely it would reflect whatever is on the foreground, which might be what you were going for but it’s still confusing.

Shadows are very dark which means there should be much more light, giving overblown areas really. 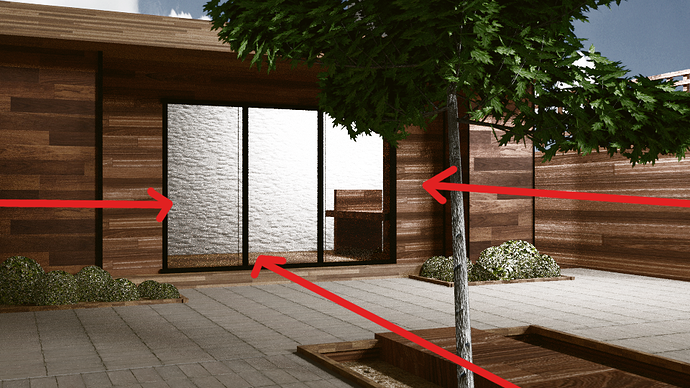 I won’t list more. Not the intention to bash someone’s first render.

Thanks for the feedback! I really appreciate it, even if it is all criticism; That’s what I need to get better! I did kinda cut my timeframe short, hence the boring focus point. I would honestly rather you to have kept going with the criticism, as I would rather be broken down to rebuild myself even better than to have everyone telling me I did a good job when I really didn’t… Should I start another scene to improve my skills or do you think I should keep working on this one until it is almost perfect?

Very nice for a first render!

the lighting looks a bit fake, instead of using point lights ( the lights in your scene looks pont lights to me ) try using a sun, the lamp inside the house is a bit too strong turn the value down a bit. and as JA12 Said, add a thin glass surface in the windows, and maybe try using bump/displacement in the wood material.
Take my comments as constructive ones

For a first render this is not bad at all! There’s already something that a lot (even experienced) artists face: composition. As said above, everything points to the middle, so the eye looks this way, but there’s nothing more than a bump white wall to look at. There’s no storytelling in this picture, or it is an architectural render, and then there’s not enough props inside to make the house feel habited.
The lightning is not so bad, feels like a natural sun lightning coming from the right. This has been done right for a first render.

Also, the materials used are too simple: the wooden walls on the outside feels flat and fake, mainly because of the lack of specular reflection. There shouldn’t be lots of, but enough to highlight bumps and reveal the bumps. The glasses on the door should have used Glass shaders, which means reflections of the foreground and what’s behind the camera, so you’ll need to work more on the “unseen”.
The trunk of the tree also looks fake because it looks like a tube with a grayish texture. Here also some bump mapping would make it less fake. The leaves are well made, I like them, although the shader is a bit too simple; rather than a plain diffuse shader, I would have gone towards a translucent + glossy material, with slight bump maps, and a more apparent texture.
Finally some color correction would have been good, straight renders often does not look good.

Last thing is the color palette. I highly recommend you to watch Andrew Price’s video on Understanding Colors, it is very intresting, and important when thinking of your scene.

This render is to me an early render of a project; more are to come, and the final render will look great. Keep it up!

as JA12 pointed out, the lines of a composition are very important. to me, the scene looks very stark, as seems to be the case with a lot of these archeviz type render. in addition to some focal objects ( table with a pair of gardening gloves on it or something ) i would suggest adding some leaves on the ground, which would make it more believable, and less sterile. also, using grime maps is a good way to variate the surface of materials that are too clean. when you see a paving stone or pane of glass in the real world, it is rarely spotless. when things are too clean, it doesn’t look natural, and robs from your illusion.
(edit) also, I would suggest making the room more spacious, and place some furniture or something around. right now the thin-ness of the corridor is flattening the image.

The thing that stands out to my eye in the first render (dismissing the second, which is seriously overexposed), is the back fence, behind the rock. For one thing, I wouldn’t make that “wood.” Also, consider that some shadow-action is needed.

I think I’ve spotted what my eye did: that vertical light-band along the wall, just to the right of the “real” corner, has the visual effect of being another bend in the wall … where a bend ought not to be, and in conflict with the straight edge beneath it, but nevertheless breaking the all-important “3D Illusion.”

Another factor to consider is that real outdoor light, even on a cloudy day, is a mixture of yellowish and bluish light. Often, two light sources are used. In shadowed areas, the blue (subtly) prevails. A real shadowed area, in addition to being darker (of course), is also slightly bluer.