I’ve done a fair amount of modeling, but mostly fixed items like buildings, so did not have have much need for rigging a model with movement in mind. After considering a number of possible first items, I decided to start with a scraper of the style made by the Fresno and Russell manufacturing companies. For those not already familiar these types of scrapers, used in the last part of the 19th century, and the first part of the 20th,

is a demonstration of the operation of a scraper I’m trying to rig. 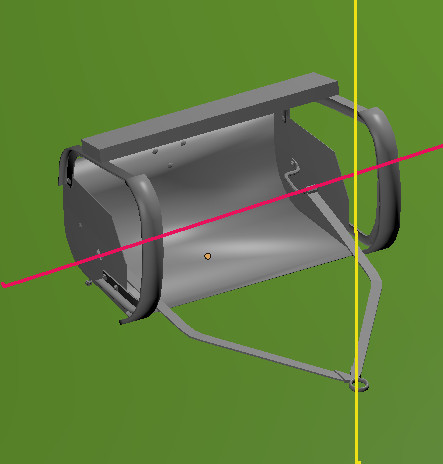 (mainly the handle in the back has been installed since I made the screenshot), this illustrates the basic needs for rigging.

I want to rig the model to enable three motions: first, the scraper should attach to the towing entity (either an animal team, as in the video, or a primitive tractor) so that the model follows the towing entity, and rotates around the yellow vertical axis as needed. Second, the towbar should rotate vertically around the horizontal (red) axis, changing the height of the attachment point (in the center of the ring through which the vertical axis almost seems to pass) as the height of the attachment point on the towing entity changes. Finally, the body of the scraper should also rotate around the horizontal axis independently of the tow mechanism. The body of the scraper rotates up a bit to pick up material, and rotates up further to dump material.

This allows all the movements you require - then keyframe some rotations of the bones in Pose Mode. To move forward, keyframe some shifts along the tow axis.

Let me know how you get on.

PS To get more advanced, use a Follow Path constraint on the first bone and a Bezier curve to guide the tow hook over undulating ground.

Thank you for your response, clockmender. I have deferred work on the Russell scraper for the moment in favor of work on a simpler rig,

This is a better start, I think; again, two bones, but instead of the three movements needed for those bones, this has fewer. 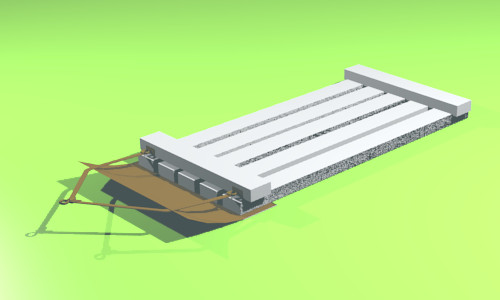