alley13.jpg1024×576
With this render I tried to go beyond my limits of knowledge and dedication.
The idea is an alley in a housing complex that was not completely finished.
Someone has already chosen the place to stay …

Comments and criticisms are welcome and do not be shy.:evilgrin:

P.S. And this is my version of “Living in the slum.” I have submitted the image and would like to know your opinion to do better the next time. Thank you.

Hi,
I’m definitly not a pro but I try to give a comment here.
I like the lighting in your scene. The lense flar is too strong. If the bright shiny spot above the buildings in the background is the sun, I would take it out.
I like the general idea of an appartement complex like that. Your image is a little confusing though. I like the texture on the ground like the little “heaven-hell” game and the dirt. The textures on the building seem a little weird in some parts.
And I would put some kind of doors and windows on the appartements.
If you want it to look like a slum scene you could try to add some Oil Barrels with fire in it and make it a night scene. Or put the camera a little closer to the ground a focus on more details like flying newspapers, coke cans and such.
But overall not a bad render, specially if you consider yourself a “beginner”.

Hope I could help
mitti2000

awesome job, not a pro either, but u might want to try and fix some of the texture stretch, also the texture looks a bit flat, but nice entry

very nice indeed. i would also recommend using the rule of thirds. blender has the ability to split the camera into thirds and it is awesome!

Any comment is welcome if it is sincere.
mitti2000, ultrasuperbox, blackhaus thank you so much for the comments and tips.
I am a beginner.
There are no doors or windows because the houses are not finished.
The idea is not just “create” a slum, as the title suggests, someone is already installed but not noticeable. The homeless are “invisible” in our society.
More “trash” I think it gave the feeling of abandonment to the alley. I thought in a private condominium, but closed to the “public”.
I also know that the camera’s ability and used the rule of thirds and one of the diagonals.
Thanks once again.

I like the concept. I reckon you could have something stunning if you played with the lighting and the angle a bit. The reason the image is confusing at the moment is because there isn’t really a focal point, there’s no stand out element to look at except the lens flare which is a bit distracting. I understand what you’re trying to do with it but in this case it seems to cut the image in half because it stands out so much against the rest.

If the idea is living in the slums I think you’ve perfectly captured that with the honeycomb-houses which to me look very crampt so what if you tried an angle from the ground up? Tried a night or twilight scene and illuminate using dodgy street lamps? Just adding an artistic touch to the composition so the whole thing has a pop factor and tells a bi of a story. Great job though, I like what you’ve come up with

Dakka Dakka thanks for the comment and tips.
I’ll try to improve it with your tips in mind and then show how it looks.

http://imageshack.us/photo/my-images/11/alleyfs.png/ Here a higher res.
What do you thing? For me it is better. 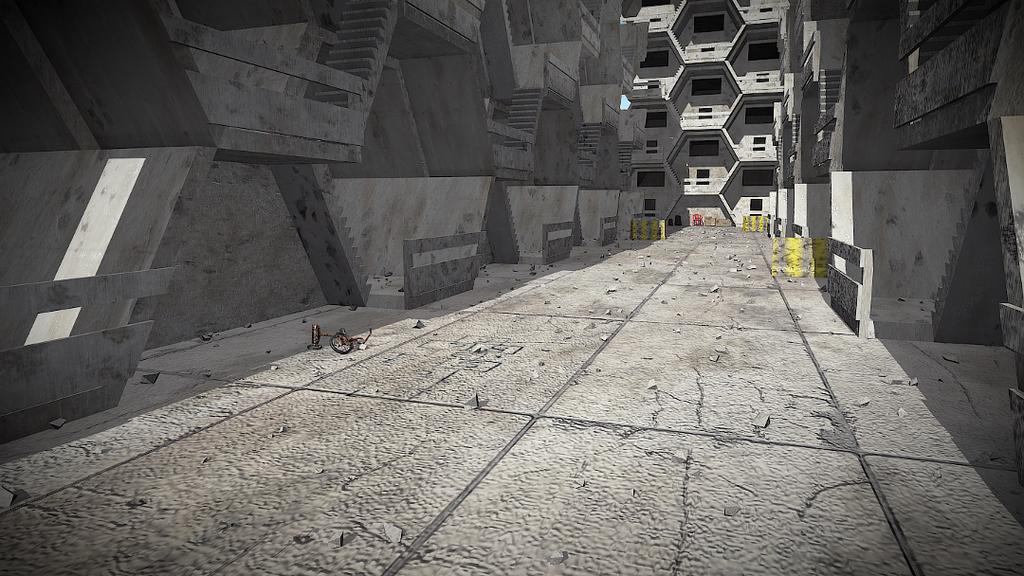