I’m currently working on a model for a Left 4 Dead 2 mod, which is a crashed airplane.

I never had to destroy anything, so it was really hard to figure out a way to do that. I didn’t find a lot of information about how to do that. I chose not to use any simulation for the crashing, as I thought it would produce too many polygons or the retopology afterwards would be too complex.

My current state is that I modeled all subparts, that can get distorted and become visible through the destruction. Then unwrap and texture everything. Then place them the way the should finally appear after the crash and create a high poly with more details through sculpting. I then reproject the lowpoly to it via shrinkwarp modifier. The downside is that I can’t change too much through sculpting, because shrinkwarp wouldn’t work any more and I would have to modify the lowpoly and therefore redo the texture. And the texture I can only make without the damage, as I need to paint straight lines over the surface and so on.

Here are some images of a first, quick test of this workflow. I now have to do that for the whole airplane with nice UV maps etc. 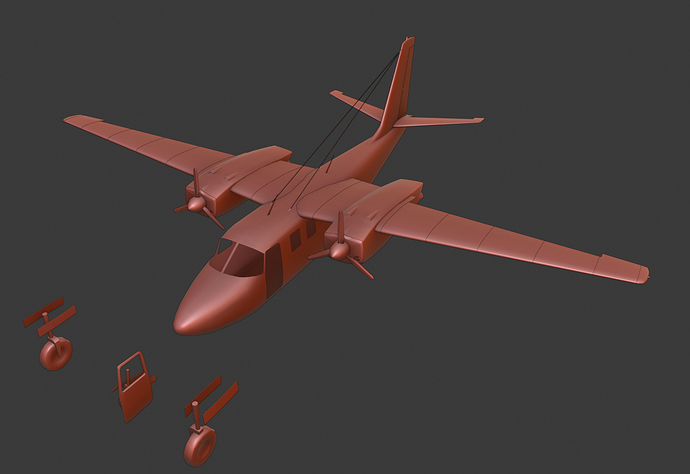 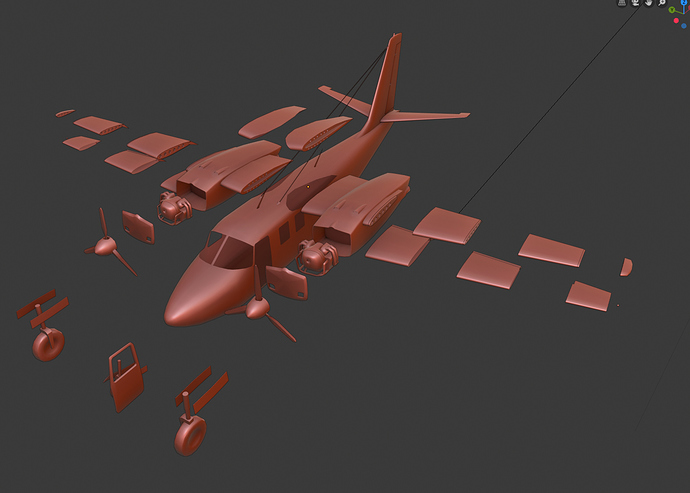 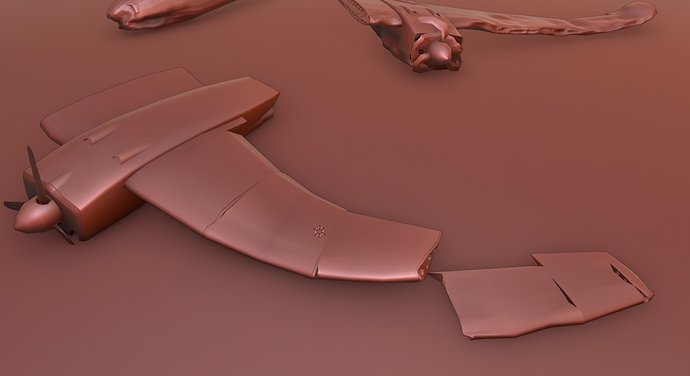 The only other realistic workflow that comes in my mind is:

If any of you has a better idea of how to approach it, I’m eager to hear it.

read a bit but it’s a lot of text.

I think what you have now is working good. It’s not the end of the world if your workflow is destructive. Sometimes it’s the best way to go when you want to be truly free.

If I were you I would totally focus myself on finishing the scene. Not sure why but I get crashed in the desert feeling from it:)

It’s not the end of the world if your workflow is destructive.

This…
It’s not always a benefit keeping everything non-destructive. Look at Houdini for instance. Sometimes (esp. modeling) the whole non-destructive nature of Houdini can be a big pain in the behind.
If you want to quickly build ‘variations on a theme’ Houdini is awesome sauce though

There’s no ‘one-fits-all’ workflow, but Sculpt>Retopo>UV unwrap>Texture is fairly common though.

If I were you I would totally focus myself on finishing the scene.

Yes, that’s what I will do now.

Next time (a crashed car is already requested in our mod) I will go the Retopo way to see how it will work out.

Honestly, a truly crashed airplane (or, one that was caught by a windstorm and ripped from its mooring, which happens much more often, to the consternation of insurance companies) doesn’t look too much like an airplane anymore and a lot of it might not be there. I would begin by carefully establishing the camera viewpoint: exactly what do I want to see “in-frame,” or not. Then, I would sculpt the parts, trying to make them look “airplane-like” but terribly distorted. For realism, you’re going to need to have a very clear idea of exactly what happened to this plane.

Hey sundialsvc4, thanks for your feedback!

The model is not for a still scene, but will be an ingame model. The main story behind the crash is that all 4 passengers survived, so the cabin should be somehow intact. So I’m concentrating the destruction on the wings and the back of the airplane. I also have some photo references from real life crashes where the people survived.

But yeah, realism is hard. Especially there are so many micro destructions and loose parts which are hard to reproduce because of the polycount that is limited in the games engine. But without it, it always looks a bit like a miniature model that was broken down.

This evening I will continue working on it, then I will post an update.

To save yourself some work, make sure you know what the entire crash site will look like. Take into account boulders, trees and other geometry from the game’s level design that will impact how the final scene appears. It may be that once the plane is in the scene, that you won’t see a lot of it behind trees or rocks or similar. You can save yourself modelling the parts that will be hidden by level geometry.

There is another way of doing this. Depending on what sort of damage you need, it might be possible to build your crashed plane’s low poly directly. Make your doors bent and your wings folded. Once you’ve done that, apply surface damage like dents and dings in the texturing phase. You could even apply the damage as displacement textures in Cycles and bake them out to normal and AO maps for use in the game. This won’t give you the same level of quality as sculpting a high poly mesh of your crashed plane, but could potentially be faster and give ‘good enough’ results for an older game engine.

One more thing, you can take parts of your model, a small section of your wing for example, and use it as set dressing. It would appear as a chunk of metal that had been torn off the body of the plane when it crashed. You could then repeat it around the crash site, changing the angle, diffuse texture and size to make it appear that it was not the same mesh used multiple times.

You can save yourself modelling the parts that will be hidden by level geometry.

Yes, luckily I have the L4D2 Map available so I can have a detailed look at the scene and can also change it if necessary.

Depending on what sort of damage you need, it might be possible to build your crashed plane’s low poly directly.

Once you’ve done that, apply surface damage like dents and dings in the texturing phase.

Yes, that’s not a bad idea. I think in the end painting the damage in sculptmode or in directly in the texture will be quite similiar in worktime, but i will try both or rather combine them, I think.

Small metal chunks are definitely something I want to do, maybe cutting them out of the crahed model.

I finished unwrapping now and started the texturing. When this i finished, I can then completely concentrate on the detruction. 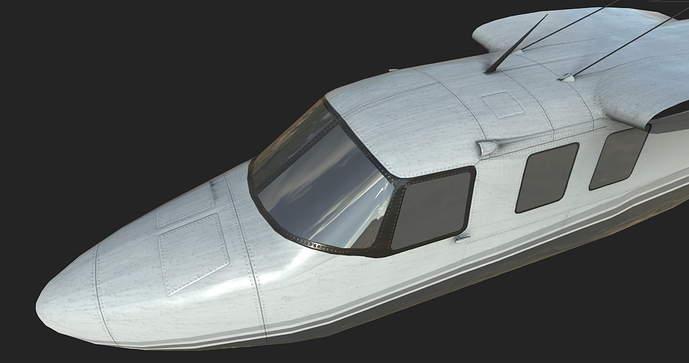 Glad to help. Let us see the finished scene (or link to the level download!) when you are done.

Better yet, keep us posted. I’d be interested to see how it goes.

Better yet, keep us posted. I’d be interested to see how it goes. 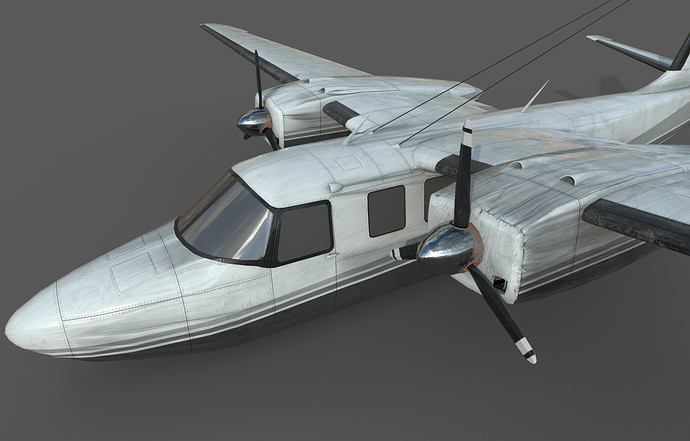 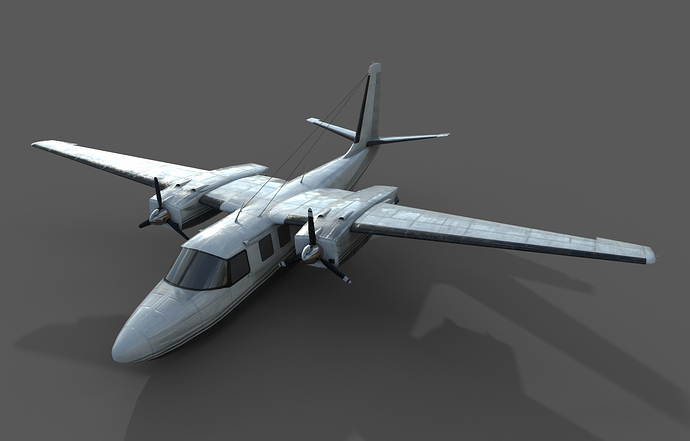 So, finally an update.

I finished the mesh work. I also started to work on the final texture, beginning with the wing. I’m not pleased with the dirt so far, it just doesn’t look realistic. The alphas in Substance Painter are not ideal and with the particle paint also I couldn’t get the results I wanted. Well, have to keep trying I guess. 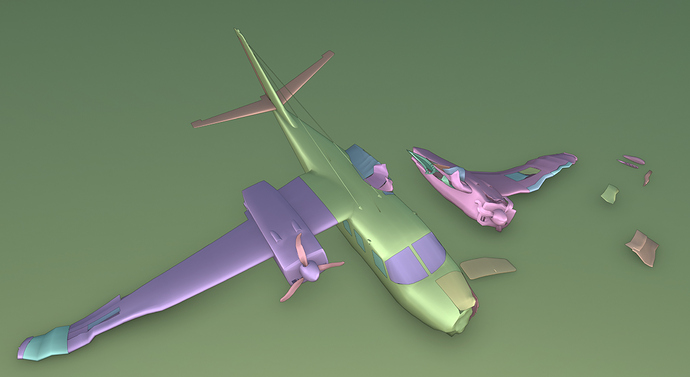 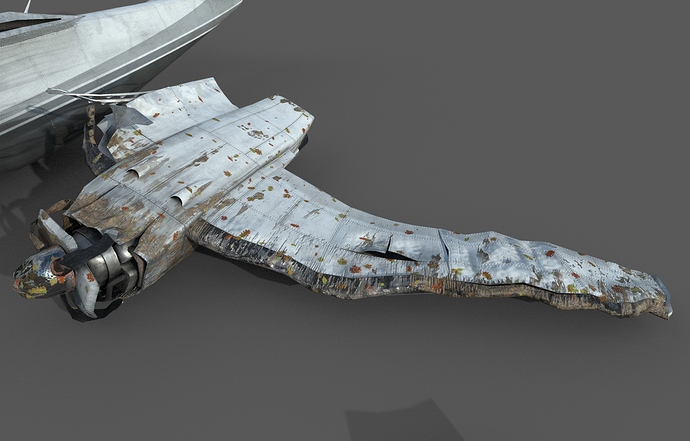 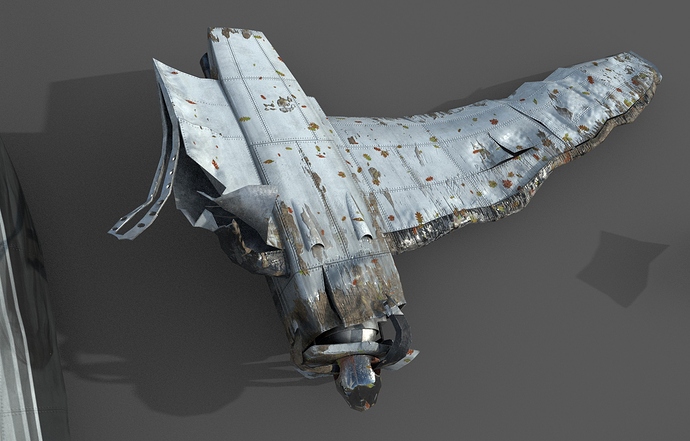 I will post some images from the model in-game later. 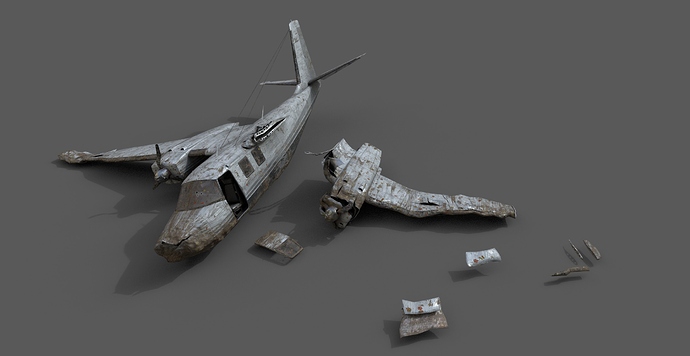 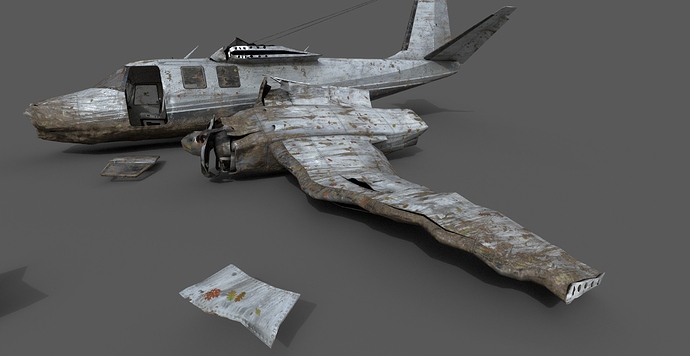 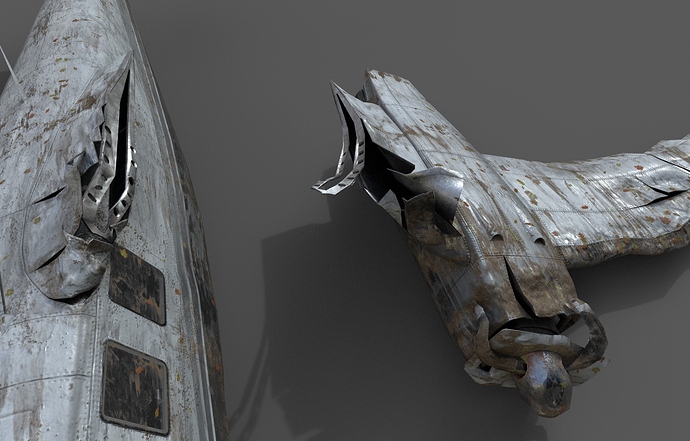 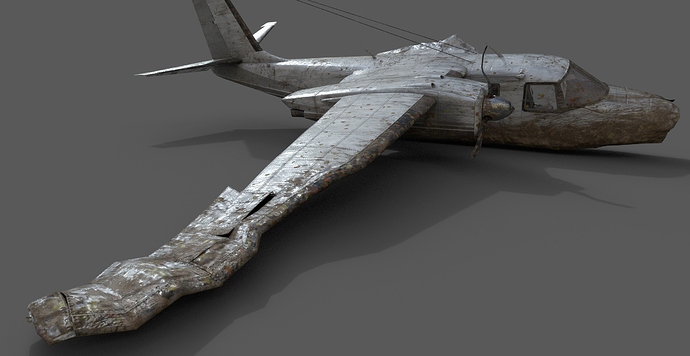