This is the first time I’ve posted my work on BA. I’m a relative beginner…I’ve been teaching myself Blender for about the past year, and I’m hoping to use it to make short scientific animations, primarily for scientists themselves.

I recently submitted an entry into the contest “The Flame Challenge.” This is a contest sponsored by Alan Alda and the Center for Communicating Science at Stony Brook Univ. to explain what a flame is to 11-year-olds, and it will be judged by 11-year-olds. The video is a combination of camera footage and special effects/animation done in Blender. I welcome your comments and criticism because even though the vid has already been submitted (deadline is April 2), I know it’s not perfect and your comments will help me learn and improve!

Actually, the main thing that bugged me during the making of this video is how to make the torch look like it is really attached to the wall. It looks fake…and I don’t want it to look like that. Any tips on how to incorporate Blender objects onto a video background so they look real?

second: perspective
if your torch is not perfectly following rule of perspective for the background scene, the eye is going to pick it up whether the viewer can say what is wrong with it or not

for the colour / texture of the torch, i would try mapping a sample from the iron railing in the foreground to contextualise
i can see a fixture over her head above the doorway and it doesn’t match the appearance and weathering

believability: that girl is maybe ten years old but the torch is mounted at her eye-level
would it really be mounted so low?

lastly, depth-of-field
the torch seems to be in a different layer of reality one step closer to the viewer than the wall is
i would experiment with using a still image of the background or reference video footage taken from the same tripod position without the girl
with the wall perfectly in focus
so that the grafted-in torch animation will be easier to blend in to surroundings

when the background and the torch are all in the same focus and appear to have the same depth-of-field, treating that as a layer so that any change is made to the entire thing equally

I did this crude paintover to highlight the main issues here: 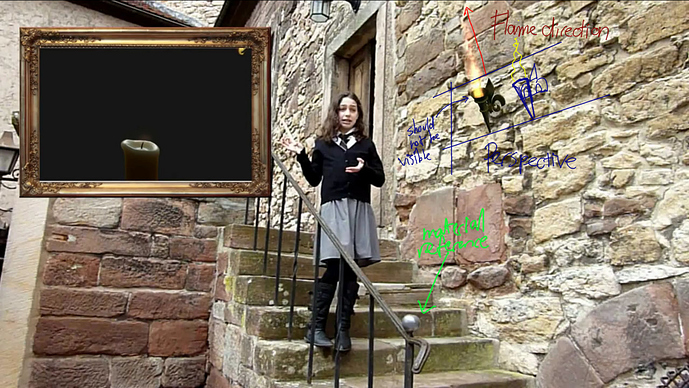 1 (red). If this is a video for educational purposes it would seem to me that at the very least the flame should obey certain physical principles. Last time I checked heat rises upwards, and definitely not diagonal, aligned with the torch.

2 (blue). The viewer is clearly standing below the torch. Fix the camera angle.

3 (green). Assuming the torch is made out of some kind of metal, you can take the surrounding objects as material and lighting references.

And lastly, compositing. Look up on using ambient occlusion combined with a shadow only material representing the wall.

Thanks for the tips! I agree that there are some DOF and camera angle problems, and using the surrounding materials to fit the torch more into the context of the scene is a great idea.