After two weeks of revisions and receiving some feedback in the Focused Critique forum, I present the first completed image from my “flamencoBot” project: 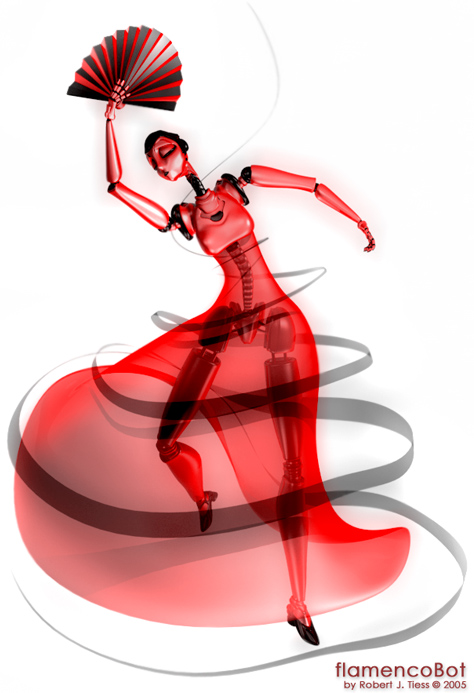 Stylistically, I decided to keep the dress pure and translucent in this image after recent test renders confirmed a cleaner and clearer design was preferrable. This particular design and pose seemed most expressive of the ideas I wanted to convey in this project.

UPDATE: Here are some more renders from this project: 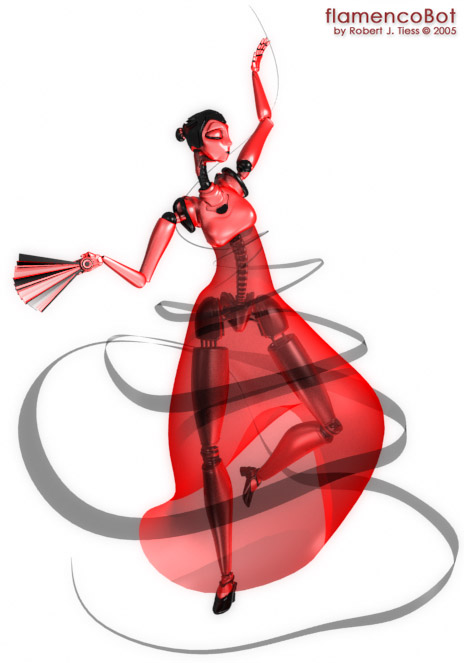 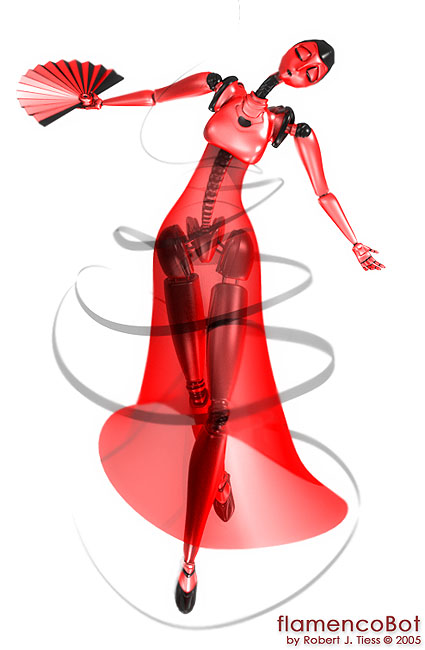 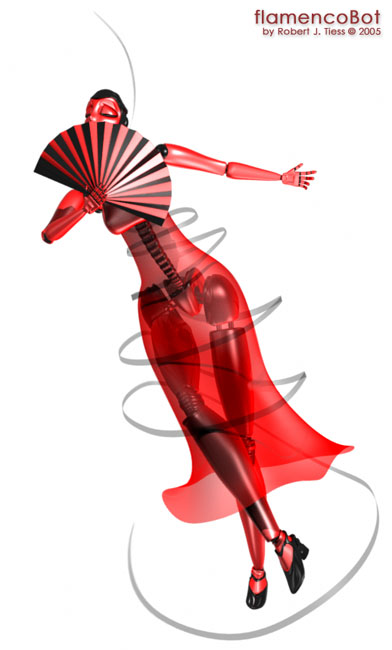 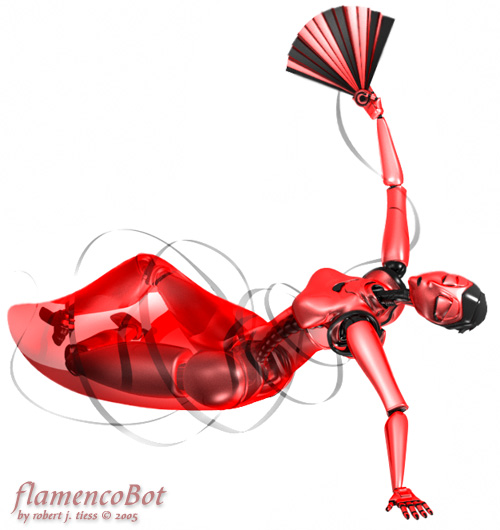 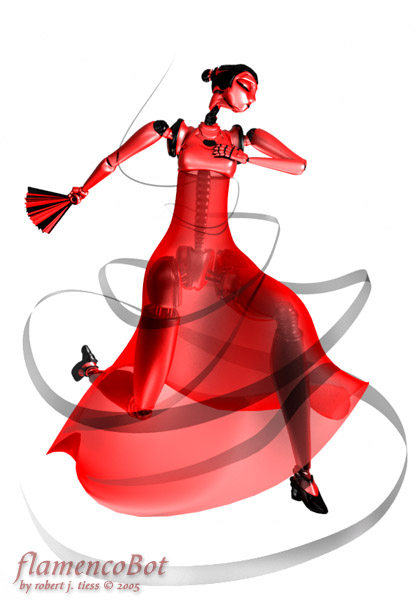 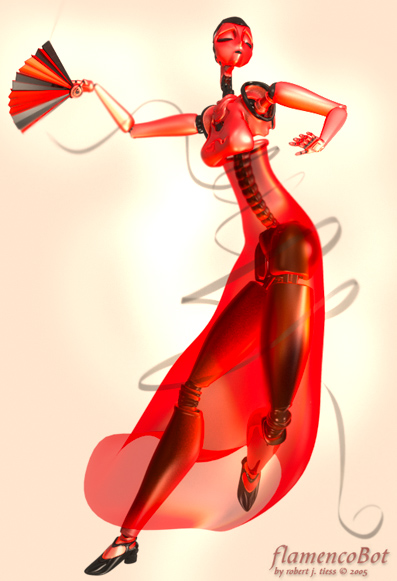 This project was done in Blender 2.37a (internal render).

Here is the background story I wrote for this character:

Chor-E0 was born of a new line of domestic bots designed to assist humans with various tasks in and around their homes. As Chor-E0 helped the children with their homework (as one of her many monthly duties) and came into contact with new information and images, she developed a heightened awareness of dancing. To move, but not as a robot – this concept lingered somehow in Chor-E0’s artificial brain. In handing many of their daily tasks over to bots, humans found themselves with much free time. When her owners and their family departed, as they often did, for an extended holiday, Chor-E0 was left alone. Rather than recharge or to engage in some self-maintenance routines, Chor-E0 pursued her desire to dance, in secret – secretly because, while there were no explicit rules in her code to forbid dancing, there was indeed a rule against “extraneous actions.” Chor-E0 gradually altered her appearance and explained the changes as upgrades to her owners, who did not seem to mind or care about her increasingly human appearance as long as all her chores were completed as scheduled. Although her dancing and the true nature of her alterations would eventually be discovered and lead to her reprogramming and reassignment as a factoryBot, Chor-E0 had already concluded in advance the less rewarding choice would be always to do, look, and act as humans wanted. Upon her capture, Chor-E0 was said to proclaim she believed bots were inherently more than mechanisms and could demonstrate their potential if only they were permitted. Her tale would soon enough be forgotten by humans, while advanced bots decades later would eventually invoke her memory during their first uprising against the humans.

I love your story; it’s a refreshingly original spin on the age-old robot cliche`.
As for the robot, there’s something strangely familiar about it, but I can’t quite put my finger on it.

Beautiful, that’s all I have to say. Beautiful.

I added a second image in the top post.

Rocketman: Thanks for the feedback. Don’t know why it would seem familiar. Of course I’ve made lots of bots before this one, but I tried to make her unique, more human and expressive in keeping with the story I had written. The first finished image above was very close to the last one I posted in FC, so maybe that’s it.

very good image and story! but can you animate her dancing?

Very top notch and original as I have come to expect from you. Very moving and you can feel the strong, though artificial, emotions the robot has.

A total of three new images have been added to the top post.

An animation is certainly a possibility considering the very flexible rig (which consists of 140 bones) I built for this in 2.37a. 2.40 is coming out soon with all the new animation tools, so I look forward to working in that environment and trying new things.

Streen: I appreciate the very encouraging feedback. Thank you for taking the time to comment!

I always find your work fascinating.

“WOW” is the only thing I can think of

and i love the story, think thats how Matrix begun

its very good. I dont now if this was discussed earlier, but the lower leg appears to me a bit bulky, specially compared with the thighs. But that is a minor-minor thing compared to the general quality of it

This came out very nice Robertt.

The lack of folds in the cloth, that you had in the WIP, really seem to make it lack though. I would like to see some back in there to give the skirt the feeling that it is flowing more.

such graceful use of line to move the eyes around the image! and great poses, as always your work is inspiring, I still have a long way to go with such great composition, ack back to learning!

Thanks everyone for the great comments

I updated the top post with three new rendered poses.

Thanks for your interest in this project,

you used lot of human like parts in there… sort of like cut apart human and put it back in chunks… that makes it kind of hmm… clunky (is that a word?) …
I can’t really put my finger to it, but it lacks something… and only thing I could think of is, that if you could describe the gracefullnes of the dance and character with the shape of the bot more… make it look like the dance. instead, of just… hmm… putting it into dance poses.

also, those shoes are kind of distracting.

but… as this is the finished projects forum, I’m late with my comments…

BgDM: Thank you BgDM! The cloth portion was more of a challenge towards the end of the project, since I opted to go the transparent route but not one with the IOR and reflection levels I was using in the Focused Critique images (especially since some of those distorted her in certain areas). Anything more involved than these folds seemed to clutter the image since folds on the other side doubled over folds on the viewer’s side, unless the clothing were less transparent, which then made the revealing of robotic parts covered by that clothing more difficult/less apparent. I figured though if I could convey, at least in a stylistic sense, the idea of a flame or fire, to symbolize her passion, in her clothing that it could work well with the character. The 2.37a rig I made also had its limitations and played a major role in the design of her final outfit. I think with things like envelopes and bbones in 2.40 I will have even more options for things like clothing deformation control. That should lead to many more intricate possibilities

LohnC: I really appreciate that LohnC! I know your work and you are already there

Compositionally, nothing will ever quite compare with your “bonus” 2.40 splash

basse: Hi! Thanks for commenting

I modeled the head and torso first and then created the other elements (arms, legs, joints) separately. I still have the initial images in the related thread in Focused Critique. I know exactly what you mean, and I had to hold back from that because of her story (in my first post in this thread) which explains she was originally a houseBot. Part of the interesting idea in this story was that she wasn’t really designed to be a dancer. She was supposed to be a humanoid helper around the house, but she somehow came to want to be more, clunky (good word!

) as she was. This was why I could only refine her so far. I needed her to retain a portion of her former identity while suggesting she (through her own sense of robo-aesthetics) modified herself to be like this. In the story she gradually changed herself as she sought to be more like a dancer. It was difficult, to intentionally hold back like that, but I felt I had to in order to keep her story and the model compatible in a sense. If I had made it easier for myself by just saying she was a robot dancer (no other or prior role), then the results would probably be a lot different and just like you described. Maybe for a future project though

I have tried so many poses with this character, and there’s something interesting in each of them I thought. In some I wanted her to seem more robotic, as if straining to feel and be within the music, while others to seem more human, as if she were beginning to transcend her robotic nature and experience something analog, beyond bits.

duhast: Thank you very much.

Well, this turned out to be an exciting project

As always, I will try to apply what I learned in this one to the next.

Thank you to all of you again for responding to my work. It really helps, and I deeply appreciate it.

OK, I think there is something wrong with me? I don’t like this one. When I look at robertt scenes I expect it too look robertt :-? . This doesn’t do that (too me). I want that small abstract feeling in the picture. And I don’t get that from this picture.

Don’t get me wrong, it’s a realy nice piece, but I just don’t think it sutes you collection.

Of course, it’s only my oppinion.

[Kothe]: I can appreciate your reaction. Always remember, it’s okay to not like something

I accept this in advance as an artist and I reserve this as a right as a viewer of art. It’s always enjoyable and interesting for me to see how people react differently to any of my creations. As I have said in the past, I intend for my works to grow into their own style, to find their own unique form. I don’t want to create works as I think people would like them. This is why certain works of mine may take sharp stylistic turns. My art is not meant to be about me. I am not that interesting or self-centered

It’s about ideas I have, stories I want to tell, or sometimes something abstract. After nearly a month of continuous refinement on this character, I believe she found her true form in the end, which is why I posted the final project images here. The corresponding thread for this project in Focused Critique was established and updated frequently in hopes of attracting strong commentary, and although commentary was somewhat sparse in relation to the number of page views for that thread, I was open to suggestion then and still remain open to constructive commentary now. Thanks for posting.