The idea here is to create a flamenco dancer robot

Here’s an early view of the model in progress (about 30 minutes of modeling so far):

Ideas I have for this include a metal ruffle dress, a fan, a flower in the hair, better shaders (placeholder material there right now), more dramatic lighting, a stage with curtains in the background, traditional flamenco style shoes fitted to the bot, and many more details and better defined edges

I do want to keep her overall design smooth and flowing but also want to connote her robotic quality, which should be balanced with dramatic humanlike flamenco dance positions. If all turns out well, I may do a small series of renders of her in different dance poses, with/without a fan.

I will try to post updates as major ones occur.

her expression is very sad for a very vibrant and postive dance, i think, but it’s a little tricky to see from your render. perhaps post clay’s to show the modelling until shader is finalised?

She is too cluttered around the face, perhaps simplify or figure out a way to make it look more “clean”. I think it might be the raytracing causeing that effect, try increasing teh frensel or maker her less shiny to get rid of the “clutter” effect.

Nothing wrong with complexity, just make sure those feature are more defined and less blended together.

Woops, sorry just reread you post you already mentioned what is stated in my post sry. Now to make her sleek yet robotic just do as I have said above and define the features more.

traitor: You’re right about her looking sad in that last one

Although I am aiming for one of the more serious flamenco styles, I don’t want her to be too tragic looking. I want her to exude some passion despite her robotic origins, almost as if she always wanted to be a dancer but was programmed to think she was simply a robot, until she decided to study the history of human dance, made her own “dress” (yet to be modeled), repainted herself red, and began acting unlike the other robots in her series. I think you’re right about holding off on materials for now too. The first one will just be a hint of where I intend to take this in terms of color. I have an update below that is just gray and reveals more of the face as I revised it through midnight. Hopefully in this position her expression is more matching what I described.

Early into my workflow I establish basic color and materials for objects, since it helps me in different ways. It can be distracting and misleading though when presenting it as a WIP, so I’m heeding traitor’s advice and just posting some neutral looking renders for the time being until I near the final stage for this project. She is not going to be one of those gadgety type of robots, with lots of wires and little parts sticking out from her, so the details I have in mind will focus more on form and flow.

Okay here’s where I left off last night, about 15 minutes of tweaking from the prior stage. Much more work and refining to be done.

Her neck and back don’t look like they can bend very easily, and for a “dancer bot” it would be something that would be expected. Maybe try adding some space in between the sections to express ease of movement. Not a whole lot, but just enough to express some flexability. It would also be nice to see the lower body once modeled, but your progress is very impressive.

On a more furthered examination, below her shoulders should probably be slimed up a bit, it’s very squared off and parellel to her spine which is very un-feministic. Are you planning to leave the spine open like it is or add panels around the lower torso?

BrianH: Thanks for the feedback. Yes, that flexibility is very important to convey. It’s something I’m still working on. I’ve made a little more progress last night after working on other projects earlier this week. I may leave the spine as is since I’m experimenting with a translucent outfit.

About an hour and a half more work on this so far: 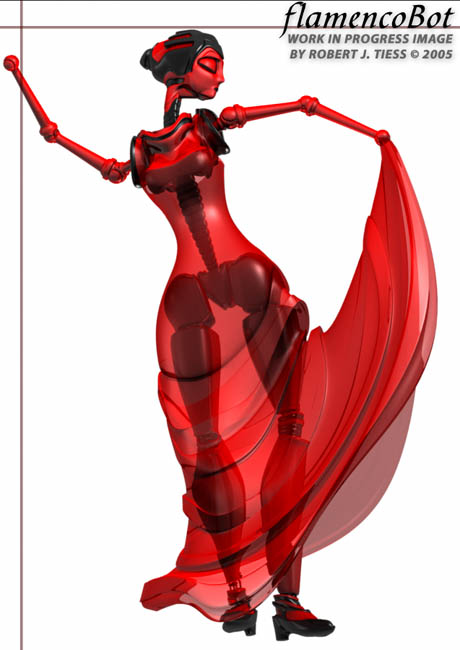 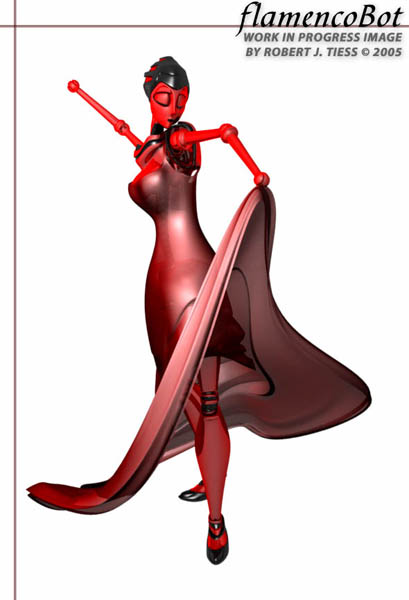 This outfit (like the arms) is a temporary placeholder, but an idea of what I possibly have in mind as far as clothing goes for the character.

you are aware that you gave her some hugh hips and big legs?

that collides in my opinion with the hole esthetic of dancing and you upper design of your model.

i would reduce the thickness / with of the legs go more conform with the arm and shoulder design.

i think the size of the legs is fine, but the need to be much much longer, her torso is too long, making her look very stocky.

I agree with traitor here. Proportion wise they do need to be longer. But I think they fit well.

The lack of hands seems odd to me though. How would she be able to grab the skirt without any hands? The arms may be a little thin as well.

And again, I agree with traotr too, the pose is really nice.

cekuhnen: Thanks for the feedback. I thought the legs could have been refined too

I have an update coming up below. The arms shown above were just placeholders.

traitor: I appreciate the followup

In my update below I adjusted the legs a bit. For the poses above I used simple empties as placeholders and test points for the rig. Last night I created the armature for the model, so the character can now be placed in more poses yet.

I adjusted the legs a bit last night. I forgot to mention again the arms were placeholders

I have a much different design below that’s more in keeping with the design decisions I made for the legs. I also finally got around to creating the hands (and complete rig) last night, since before I was using placeholder empties for test purposes.

About four and a half hours total into this project now

robertt i’m begining to really like the way this is turning out!

everything looks great except the chest and neck area.
i think the neck plate looks a little large and raised, i would make it smaller and move it down, i would also move the chest lower, and make at least as wide as the hips to make everything look in proportion. always love your voluptous robotic women

here is a photo of what i thought might look more proportional, i would also extend the neck tube as in the photo. good luck to you.

also now looking you might be able to make the hands larger too.

Wu: Thank you very much for the helpful and supportive feedback

Here is another pose and different treatment after a few minor tweaks from the last image posted. The model is still far from final form here: 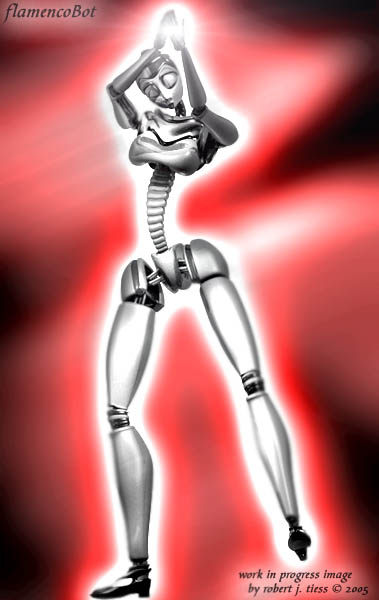 More or less experimenting and having fun with this particular rendition

More stuff on the way…

I still think the torso is too long, IMO.

the heels are cool, but i think should be way way longer, making her legs look taller and more elegant. dancers are all legs and elegance, AFAIK…

More adjustments, and a different test pose and stylistic treatment for today: 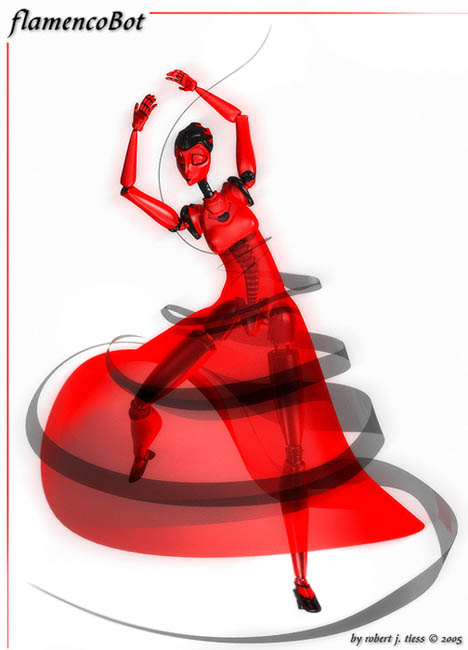