EDIT: just figured out the little ‘plus’ sign(certainly not obvious, more like an easter egg) Solved.

I’m wondering how to tear off a floating viewport in 2.80? I see that in 2.7x it was done by shift+dragging the little triangle, but this obviously can’t be done in 2.80.

As far as I know it’s done the exact same way. They’ve removed the triangles though so it’s hard to discover. What is this plus sign you’re talking about though ?

The little plus sign appears if you hover over the barely visible, tiny bevel curve on the bottom left/right of all panels. It behaves the same as the 2.7x triangles.

Oh it must be very new then, I don’t see those in my build from just two days ago. Nice addition !

I didn’t notice them before, but I just opened a build from Feb and they are there too. Are you sure you don’t have them? My current build is from the 3 days ago.

Okay I tested and I think you meant the cursor changes to a crosshair, right ? That’s always been there, correct. I think they’re actually counting on users to right-click on the editors’ separating lines for splitting/joining rather than using the corners.

Yes, the cursor changing to the plus.

The right-clicking is definitely better, but you can’t tear off a viewport that way, which is where the little plus comes in handy, I suppose.

You can always go Window > New window, although that will duplicate the current one with all of its editors.

Man, I’m not complaining. So far, I’m finding the Blender UI/UX/hotkey cutomisation to be absolutely brilliant. So intuitive and user-friendly.

It is quite flexible, right ? Room for improvement still but you can change anything, and I love that. Nothing’s hardcoded. As far as populating the panels with your own stuff, it takes a bit of scripting, but it’s really simple. The text editor has templates to get you started.

Well, as a Max vet, let me tell you the UI issues over the last 6 or 7 years have been an ongoing nightmare. The devs are finally working hard on getting it all sorted, but it’s a long way off perfect and 2.80 UI/UX has been a real breath of fresh air for me. I also have a lot of experience in Maya and Modo and the experiences haven’t been the greatest there either.

Max and Maya are onne thing, but I cannot understand why anyone would pay money for Modo now that 2.80 is more or less here. 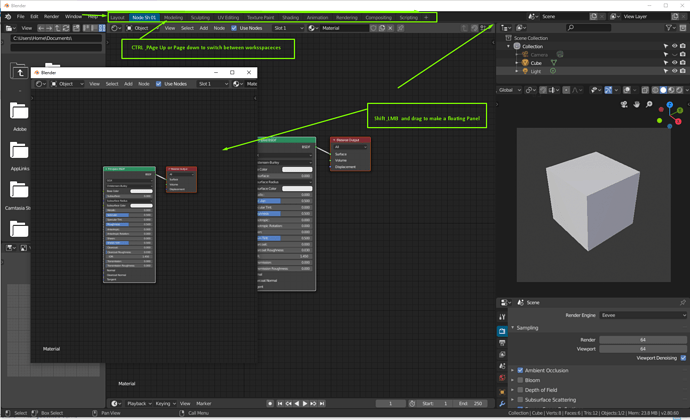 Text editor has examples of floating panels in blender 2.8?

Popovers ? I just checked for you, and… no, not yet. I suspect that’s because it’s new and maybe the API is not finalized. It’s probably going to be added at some point though.

@Musashidan ah I wouldn’t know, I started 3d with Max a loooong time ago and only ever touched it again for an animation gig two years ago. I hardly know the software. Animating with it was a nightmare though. I don’t know about Modo, but there’s a very in-depth discussion/comparison thread somewhere on this forum. I believe for modelers MeshFusion is a great asset, but beyond that… anyway there’s a topic like I said so I won’t derail this one.