Okay i found the way on how to get it working witouth the exe, great !!! 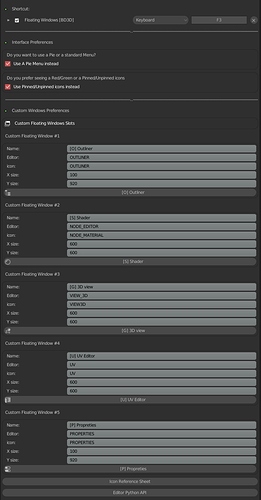 nice isnt it ? minimize/unminimize all your windows, floating windows can get in your way sometimes so you can hide them in an instant.

Hey, congratulations ! the addon seems great ! this feature could be really handy in a lot of situation !
Is there any chance to see it on linux too at some point ?
Cheers !

In linux you can install different window manager system, so i don’t think that a line of code that can work with every linux user exist.

but i don’t really think they really want a feature like that, because as i say they can install a cool window manager that have features like this,or surely better.

oh ok i see, I didn’t think of it that way. I’m sometimes working on linux at work (mint essentially) but don’t get to install my custom setup, i was thinking about this kind of configuration when asking

but it makes sense, linux users have a lot more options out there. thx for your quick answer !

But if someone tell me otherwise, and that the community want a Linux or Mac version I’ll made it for sure.

for me who is not a super/power user of linux, it certainly could be useful !

but i’m not sure if it could be useful for a good amount of linux users !

if you are annoyed by a floater, just make him instantaneously disappear that’s all

just incorpored an easy way to make the window active just by hovering the cursor with the help of a facultative exe that you’ll need to download yourself, its called Areo Tweaker, a feature named X-mouse.

this is small detail

floaters will now spam at cursor location when you activated the hotkey.
tell me if you guys prefer the old way, on the top left of the area, i can make a toggle if needed

Since the whole thing’s about floating windows, why not have a small floating button (as an option) that the user can place anywhere that would toggle open that floaters menu?

Also, is your add-on going to be centered around this custom menu with predefined windows to call up?

It would be useful if the whole process is more integrated to Blender. For instance:

, why not have a small floating button (as an option) that the user can place anywhere that would toggle open that floaters menu?

through a shortcut or a menu aint good ? look how fast it is.
Although if some people prefer having some visual option to execute the the operators i can put some a utility of the N panel ? but it feel quite not a necessity, im against overcrowding the n panel.

It would be useful if the whole process is more integrated to Blender.

Also, any floating window could have a button (maybe in the middle of the window header or something) that can be clicked to toggle the always-on-top behavior.

Yes this can be trully awesome ! unfortunately i don’t think that it is possible through an addon.
What you’re asking is a new blender build with proper window management system, custom windows handle, always on top fonctions like this addon…ect… because right now its vanilla OS window management only which is a shame… when i will learn to code my own blender i’ll try to do this as a proof of concept. Blender dev are stubborn about this whole floating windows idea…

i will try tho, i think i found something

( But your button idea is already inside of the main addon menu by the way.)

If the user clicks on the Editors list, a single regular click does the default behavior of changing the current editor to the selected one. However, if the user presses [Ctrl]+clicks, it pops open a floating window of that editor instead.

addon devs don’t have access to this menu, so impossible to tweak it.

When the user duplicates a window, it is automatically made a floating always-on-top window.

already here, its in the menu, its called"Duppli-float".
but maybe you mean that i should override the actual [SHIFT + border of the area] ? i could do that indeed. im on it.

love.gif873×982 690 KB
the addon pref panel got some ui love, lot more to come there for floaters customization so i need to prepare the terrain.

through a shortcut or a menu aint good ? look how fast it is.
Although if some people prefer having some visual option to execute the the operators i can put some a utility of the N panel ? but it feel quite not a necessity, im against overcrowding the n panel.

Right, a shortcut is good, possibly even faster. I don’t know if what I suggested is easy to do, or even possible. I was just thinking thematically, it’d be cool. A floating, small (graphic) button that I could place anywhere to quickly toggle my floating windows and/or access options for the add-on. Also, one less hotkey to worry about, haha.

Personally, I wouldn’t want it in the N panel (as opposed to the above proposal). I already hate changing tabs just to get to something (then have to change back to where I was). I would want the functionality of this add-on to be always and non-disruptively quickly accessible.

addon devs don’t have access to this menu, so impossible to tweak it.

Ah, that’s unfortunate. I wonder if a request can be made for permission because this functionality would be sweet.

already here, its in the menu, its called"Duppli-float".
but maybe you mean that i should override the actual [SHIFT + border of the area] ? i could do that indeed. im on it.

Ah, so it is! (Sorry, the .gifs sometimes move so fast with small letters in the thread, I’m not always sure what’s happening)
But, yes, if you can overwrite the [Shift]+border-drag, that’d be awesome. Furthermore, if somehow you can force Blender to make the duplicated window to be clickable right away, that’d be perfect. (Right now, you have to make a dummy click once to be able to use the duplicated windows, which is annoying)

wow, that’s cool
didn’t knew we can have multiple cam active at once

only if one is slashed, it will be ill do custom floater with that tomorrow, it will be cool.

its on my to do list for the before the realease !

edit:
it’s really hard, i hope i can pull this on before the realease…

Shall i give the possibility to choose the emplacement on a x/y coordinate of the future custom floater ?

*edit i just did

easy resize your window with the percentage bar

Very cool! I have another question, not sure if implementation-wise it’s related to my previous question, but can the add-on remember the size/location of these floating windows that it generates (within the same session)?

(In case clarification is needed, my previous question was in regards to custom duplicated windows across different Blender sessions)