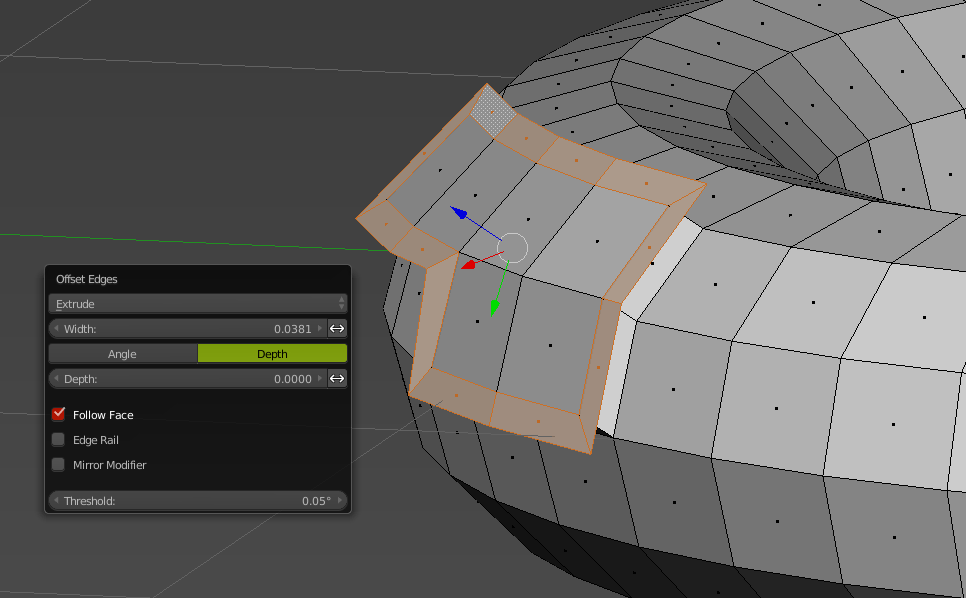 I’m wondering, what is the desired shape after you do that?
You’re not gonna leave it like that, what’s you next action?

I’m sure if you combine those 2 actions, you can find an equivalent in blender. Maybe it’s just about the order of execution.

Example?
I just post it in other topic (see gif)

Is it possible to add to simple extrude a window with units for more accuracy after action as regular inset or extrude have? And may be, just may be, You want to make this tool more powerful and look like Modo Bevel. [Modo_Bevel_Tool] Or may be set tool active (when you click on it, like a switch) and use W and E keys before deactivate tool. Anyway Big Thank You for this tools!

That could give someone the impression that Blender can make a cube and a sphere, and add some doodads to the shapes and that’s it, forget about characters, plants, buildings, furniture or anything mildly complex.

In the case of the images, it would help if we know what these Modo users are trying to make, whether it’s something simple or something that would generally be difficult without the killer feature Modo is known for (Mesh Fusion).

That could give someone the impression that Blender can make a cube and a sphere, and add some doodads to the shapes and that’s it, forget about characters, plants, buildings, furniture or anything mildly complex.

I’m referring to Blender’s core (mesh) modeling tools, like extrude, inset, bevel, loop cut, knife, polybuild, slide and maybe some others…
If you compare those tools with it’s equivalents from other 3d apps, you can see that most of the time they lack some essential features, therefore they are basic/incomplete, so workarounds are needed to achieve things that should be done with those tools…

One of the biggest aspects of Modo I miss, is the smart utilization of tools that can function as one tool rather than many. Specifically how Modo merges the Bevel, Extrude and Inset tools into one tool. I’d love to see Blender offer a selection of “smart tools” in the same fashion, and let it be an option in addition to the ones that already exist.

I do agree that some of the tools can be expanded, but the modeling situation is better than things were pre 2.8 because of the tool workflow, the tool-specific widgets, and the context menus. Howard Trickey is also overhauling the booleans so they can even work with co-planar faces. There’s also the intention to get bevel profiles in early in the 2.82 cycle.

If you want really basic, grab a build of Blender done before Bmesh was merged in, it seems like MS Paint in modeling compared to master.

Right now, the major core thing I think Blender modeling is still missing is a proper loft tool, such a thing could work well with the tool system where you could draw a path and a line of faces pop into place.

Yeah sure, there are cool improvements happening here and there, which is great, but still there are several basic stuff missing…

Not to mention the lack of “transform modeling”.

One of the biggest aspects of Modo I miss, is the smart utilization of tools that can function as one tool rather than many. Specifically how Modo merges the Bevel, Extrude and Inset tools into one tool. I’d love to see Blender offer a selection of “smart tools” in the same fashion, and let it be an option in addition to the ones that already exist.

Technically the inset tool, can function as inset, extrude and what Max calls bevel which is a combination of both. I asked in the GSOC thread for the bevel profiles to function as Modo’s bevel profiles. The GSOC is over now but the developer is always threre, althought is not a priority for him anymore. Maybe if more people asked we could have them. https://devtalk.blender.org/t/gsoc-2019-custom-bevel-profiles/7214

Thanks for the suggestion of using the tutorial blend file. I was able to work out that it didn’t like the plane shape I had created in a new project. If I joined it to the bundle of profile shapes in the tutorial blend it was happy and worked after a second attempt to select the profile face. The version I’m using is 0.0.5. I’m assuming that my issue was/is to do with either alignment or naming convention of the profile and/or mesh. Either way, I’m sure I can work it out now using the tutorial…

Stupid question. How do you delete UV faces? I looked through youtube and google it, couldn’t find a solution! The UV tools/workflow in Blender definitely need some love, its way behind Modo or Maya.

Also, Does anyone know how lathe a polygon profile(marked by the black arrow). You think the screw modifier would be perfect but as you can see in the pic, it fails, I’d like to do this non-destructive with a modifier. I need to cap both ends in this case with the same poly profile. How do you delete UV faces?

You can’t delete them but you can scale them super tiny so they won’t get on the way (which is a stylistic choice - you just moving them away from view). Also if you use multiple UVMaps in your mesh therefore some faces would use UVMap1 and other faces the UVMap2, initially the entire mesh uses UVMap1 but if you create the UVMap2 and override some faces, it means that those exact overriden faces from UVMap1 will be “hidden”. – I hope my explanation makes sense if you don’t understand me let me write it again in a better way.

how lathe a polygon profile

You can create a curve and go to the Curve button menu, [fill mode = full] [depth = 0.174], then you can change the rotation of the curve vertex with ctrl+t or at the right property panel at the viewport. The dimensions will have to be guessed. You can use a template mesh and try to bring the extrusion close to what you want and eyeball it as close as possible.

There might be also another way to have a mesh follow a curve (create a sweep rail) but I will leave that for now since curves seem much easier to use. Also once you convert the curve to mesh caps also will have to be manually filled.

If you don’t already use it, try miratools. It’s a free add-on with all sorts of useful tools.

The screw modifier doesn’t work with internal edges. Delete the + in the center of that profile mesh (so it would essentially just be a square here) and it’ll work.

that’s the workaround I’m currently using it’s abit time consuming and destructive. Would be useful if the screw modifier had an option to work internal polygons.

@staughost Yea we can delete a UV map, but I wanted to delete a single or multi UV faces, apparently it’s not possible.

It is a bit destructive but I actually prefer it. Generally speaking it’s almost always easier/faster to do something destructively than do the setup work to preserve it (for simple operations at least).

I was a long(ish) time Modo user and one of my favorite things about it was how easy working with ngons is - which is also why I like Blender so much too. Setting up hotkeys for limited dissolve on face selections and using Machin3Tools clean up scripts practically mimic 1:1 the workflow I used in Modo with seneca scripts and remove/delete to clear out edges inside faces.

Out of curiosity, what is the reasoning behind needing to delete UVs? I thought about it for a bit and it’s not something I think I’ve ever needed to do. I’m in game-dev so maybe I’m missing something.

This is my first freelance project using Blender and the shape the client want are simple(not a square or rectangle though) but small tweaks are required sometimes, making it procedural would be best, it’ll save me a couple of step. I’ve always model in Modo(destructive) and now I trying to work more non destructive, which is great for making changes.

Regarding deleting UV faces, if you model a prop and the back side won’t ever be seen by the player, you’ll have to delete them to make more room for the visual parts. Or like someone mention just scale it to zero and move it into corner/off the UV 0-1 space.