Ghad, I hope someone picks it up. This functionality is so useful it’s practically essential.

Qblocker is great for the time being, but I feel like this needs to be in Blender internal.

Also, the thing I love about Qblocker is that it’s not cursor-dependent. You just draw on the facenormal, which is ideal for this sort of tool.

Yes. The idea with this tool is that you can pick where it appears - either where the 3D Cursor is or on the cursor plane or simply on geometry surfaces.

The only thing really missing, is better visualization of the workplane, and probably also a way to numerically input the 3D Cursor rotation in the Sidebar > 3D Cursor panel.

Thanks for that info. Agree workplanes are essential IMO. Also I really like Action Centers in Modo. Still trying to understand the 3D Cursor. Hasn’t made any sense to me yet. Guess I need a quick study up on it.

The one thing I really miss are Falloffs; the closest thing would be a Lattice, and the Proportional Editing. Mira Tools added a Linear Falloff, but it lacks the interactivity that the Modo ones do (also not currently working in 2.8). For Workplanes, there’s also Ortho, but I’m not sure how it compares to the previously linked Workplane addon.

Agreed on the Action Centers. While I never really used the workplane that much in Modo, at least knowingly (I always hide it), action centers were very important. A big part of their appeal is the accessibility and ease in which to get that behavior. Granted I only really switched between a few of them, but I see no reason why this can’t or won’t be in Blender at some point. Hell the functionality might already be in there just without the easy/obvious access.

The 3D cursor always bothered me as well. It is probably the thing I hated most when trying to use Blender. A cursor should be where ever the mouse is anyway, and points in space which serve as markers have generally been some kind of pivot or origin point. I always like that in Maya, for example, I could unsnap/unlock the origin point of an object and move it around easily before telling it to go back to where its supposed to be. Due to this, the 3D cursor always felt unnecessary or rather obtuse. I had hoped they would just scrap it entirely and come up with something smarter or more familiar (industry standard) to get the same result, but this is just my own bias against the thing.

I agree with you about the cursor. I rarely use it, and it is possible to hide it (but I believe it still affects the scene?). 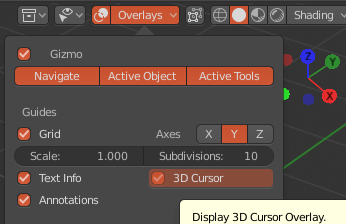 By default to move the Origin Point to a specific component (like you might in Maya), you would first need to move the Cursor to that point (in Edit mode),

then in Object mode set the Origin to Cursor (the Shift + S pie menu helps speed a little).

However, if you download Heavypoly’s config from here, he has a custom operator that will move the Origin while in Edit mode. [I use this all of the time.]

Another method would be to select your component, and enable Active Element from the Pivot Point menu. 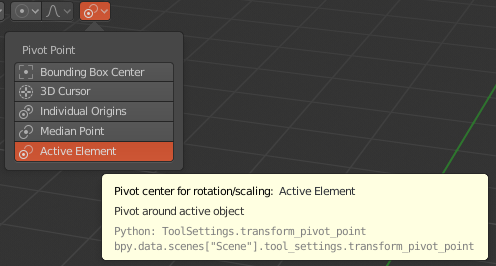 If you’re not wanting to use Heavypoly’s complete config, that’s okay. I don’t myself, so I follow his installation instructions except for installing the User Prefs, Startup, and Hotkey files. Though this means I have to go into the keymap editor and manually setup the new operators (as shown above with Smart Snap Origin/Cursor.

Lastly, visibility of tools, and settings has gotten much much better, but still could use some work. So please share here if you feel so inclined.

Its really not the same thing, especially when emphasizing the accessibility and workflow component. One thing I love about Modo is that it can be very smart in its behavior. The regular widget acts as a 3D Cursor, as you can click it anywhere and it will jump to that spot, or automatically define behavior via the action centers. A lot of the work is automated for the user, instead of a separate object with its own set of steps. You get to do a lot more with fewer steps, and its not obtrusive or visibly annoying either.
Again, emphasizing workflow and accessibly, not necessarily end result. =)

Just to proove that I understand your issue very well, I actually recommended some of those action centers when I was part of the Modo alpha team almost 17 years ago.

I know how great they are, however 3d cursor (along with the actual actual action centers in Blender) is superior in some respects compared to the action centers Modo. First of all you can get some of that functionality via 3d cursor, you just have to use it more. 3d cursor is liberating it is not a hinderance. It is literally a cursor, like the cursor in your text editing application.

Secondly 3d cursor can be used for many more things than just acting as a pseudo pivot. For instance you can make your viewport rotate around the 3d cursor, you do not have to select an object or create a dummy pivot object.

Thirdly 3d cursor is an awesome way of measuring things. Because you can see the coordinates of 3d cursor in your panel and it is not tied to your object, and you do not mess things up (like your action center) if you move it around.

Another awesomeness is that using it for snapping. for instance 3d cursor can be made to stick to surfaces, then snap your object/component to 3d cursor.

The actual list of 3d cursor use cases is very long but this should give you some basic idea how what it can do.

I personally wish that we could add more 3d cursors into the scene on demand.

Yep that is one of those functionalities that any migrating Modo user will miss, there has not been a real remedy so far.

There is proportional ediitng, you can get some of that with it but it is really not the same thing.

The mira tools tackles the issue but it not as practical.

This is one are I myself want to tackle it as an addon but I did not have to do it yet.

Zbrush understood this issue very well, so their transform tool acts as a fall off modifier as well 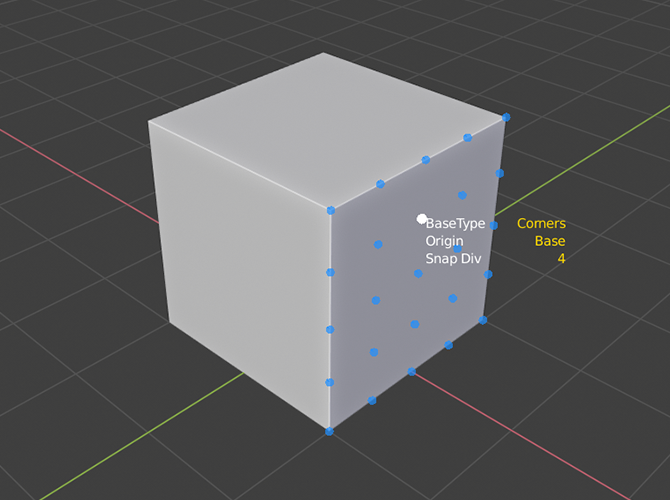 QBlocker is an interactive object creation tool for Blender 2.8. Features: Create Cube, Cylinder and Sphere Object interactively, Start your object base with different methods, Change Origin from object center to base on the fly, Change cylinder and…

Does everything also work using a Wacom pen, like all snaps, adding segments, and the other options? I’m not using a mouse.

This is the best explanation of the 3d cursor I’ve seen. I still rarely use it, but I’ll certainly give it more thought. Even the author of this workplane add-on says the new cursor basically replaces it. I think along with other issues people have with Blender, it’s just a matter of surfacing the information. Both outside of the program, and within. But thank you so much for the breakdown!

How do you find the precise middle of 2 objects or 2 vertices without messing up your action center? Obviously we do not want you to eyeball it either, Just easy

Do you think the day will finally come when we can snap the cursor to stuff with Ctrl?

There is enchanced 3d cursor addon , I use it and it works fine.

“Just to proove that I understand your issue very well”

See now I am confused.
There was no issue being presented in the first place. Just an admission of preference and why I like action centers. Again the heavy focus was on workflow and accessibility, which is much different than the 3D cursors. It is not accurate to call it an action center since they are two different things with their own approach.

I am not asking you to defend all the “other stuff” the 3D cursor can do, nor did I try to imply the 3D cursor is limited in functionality. It certainly has its uses, but when comparing it to Modo action centers only, its not a 1 to 1 comparison because they act and operate differently. That’s the point I was making.

Like many here I am also leaving Modo (slowly), and going back to Blender due to what 2.8 is bringing to the table*. My biggest criticism with blender, spanning the over 10 years I have been here, has generally been workflow related, and less about capability. The 3D cursor is no exception to that and I look forward to seeing how it improves over time or if there alternative approaches popping up which can adhere to those user preferences.

*waiting for the industry standard keymap.

See the image, there are action centers in Blender, and tools will respect your choice. One of them 3d cursor, and that is where things get much more interesting.

You can get almost all the functionality of Modo by combining the stuff below (action centers + Transform Origins), which is what Modo’s actions centers are. Most of that stuff is already here. 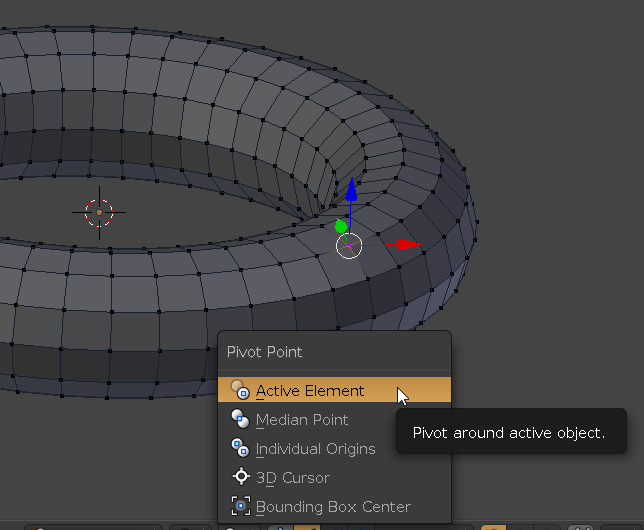 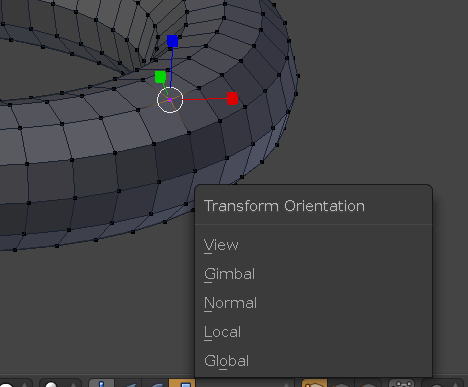