so I decided to take on my first serious project with Blender. All I did until now was just a couple of test stuff, to see what I can do, how far I get, where I need to improve, etc.

(UV unwrapping and creating nice textures is one of my weaknesses.)

Anyways, so I was halfway through the first charge until I realized that I never took a closer look at Cylces. So I did (Ohmygod-feels-like-a-quiz-by-Einstein) and this is going to be my first WIP in Cycles.

Its going to be a Archer/Ranger/Scout type of warrior. Medieval setting. I like bows, arrows, slim blades, slim armour and such.

So Ive started off with the arrow. I even had a concept drawing for the arrow, looked pretty nice and fancy in my drawing, and after I rendered it, I wanted to melt away because it was so childish and eh… so I started over from scratch. 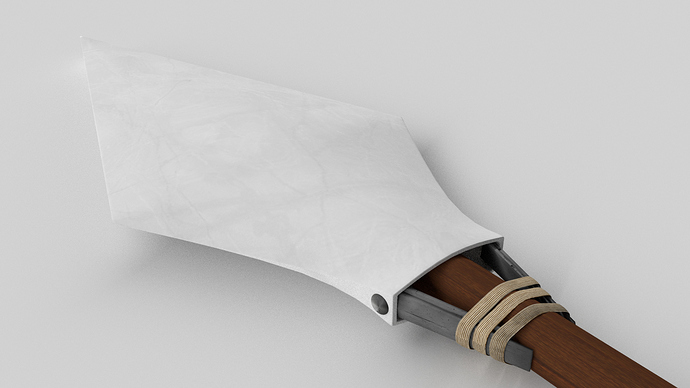 Yeah, as I said. I was kind of ashamed.

And here´s the new take on the arrow, also rendered in Cycles (for some reason Blenderartists didn´t allow me to upload the next screens, so I´ll post a deviantArt image URL. Hope thats okay):
http://fc08.deviantart.net/fs70/i/2014/018/e/9/arrow_v2_wip_by_elensanima-d72rfha.png

A lot better, I´d say, but its still lacking specular shaders, some details and some adjustments of the textures. After some struggle: (yes, the arrow took my quite a while to finish, but as time is not working against me… heh. :3) 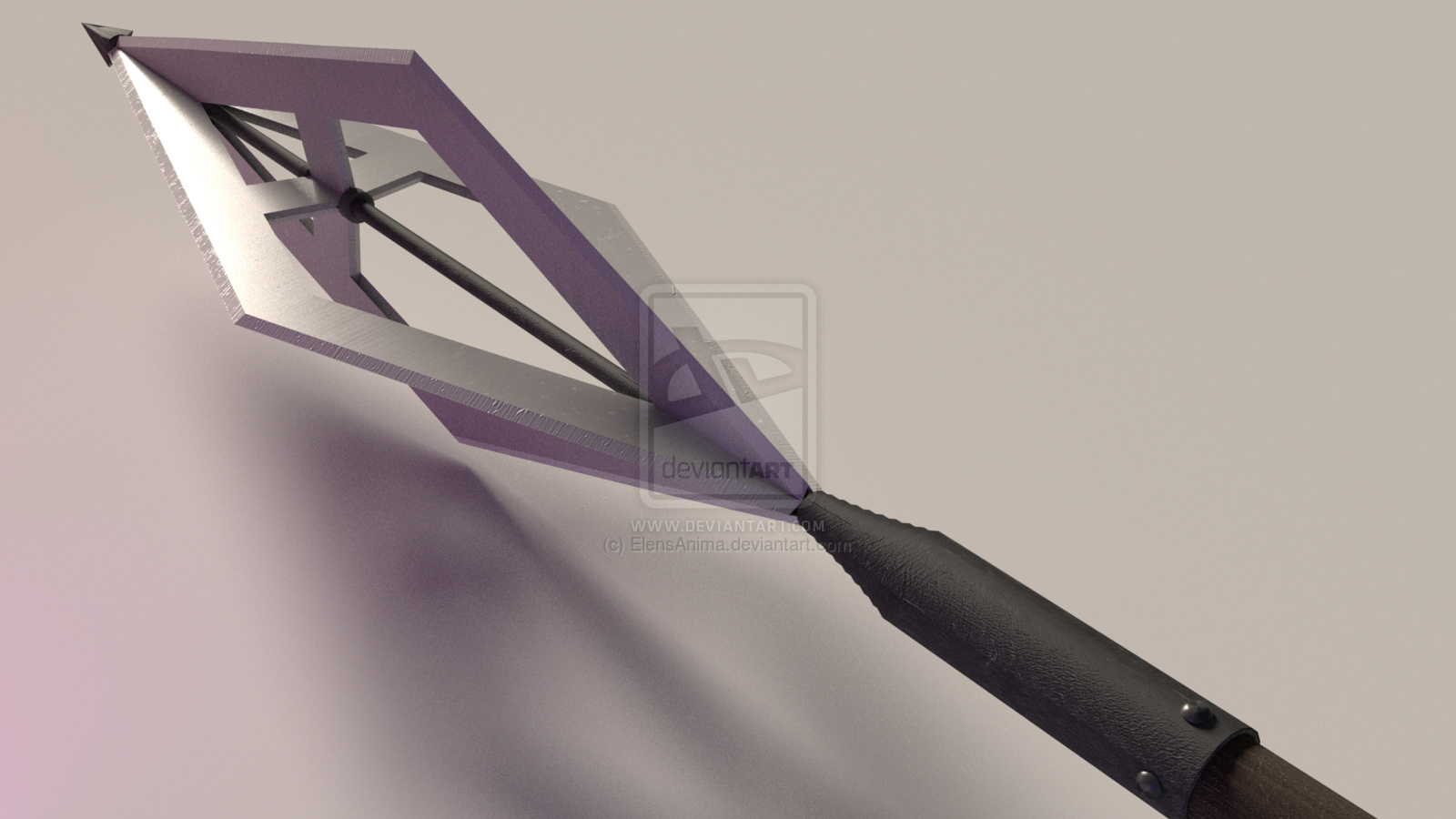 I´m calling this the final version for now.

In any event, I also have a couple of concept drawings for my next steps, and I´ll post them along with the 3D renders when I have decided what´s going to be used and what is not.

Thanks for reading so far, feedback is appreciated.
Have a nice evening/day, you guys! See you soon!

Here´s a little update. (Yes, I know. Took me some time. Work has been quite stressful lately.)

In any event, I kept going with the Shortsword. Shortsword, because as Forestscout, who´s mainly supposed to scout and not engage in open combat, a big sword would be quite inappropriate.

I just took a quick screenshot (and blacked out the path), in case anyone is interested in this and is waiting for some updates. I will finish modelling the sword tonight, and depending on my mood and motivation I might even UV unwrap it as well.
I will soon post an update with a textured version of the sword.

Before you dare looking at my horrible drawing (because you might need to replace your eyes after that):
My drawing skills have become quite rusty and it wasn´t really meant to look good. It was just a quick sketch for myself and those notes… because I like doing that. Not like I´m going to follow those 1:1 anyways, but well…

And excuse my lack of vocabulary. English is not my native language, but I´m trying. (Outline: Fistprotection. No idea what it´s actually called, but I´ll look it up on Google.) The sketch itself lacks a lot of details too. 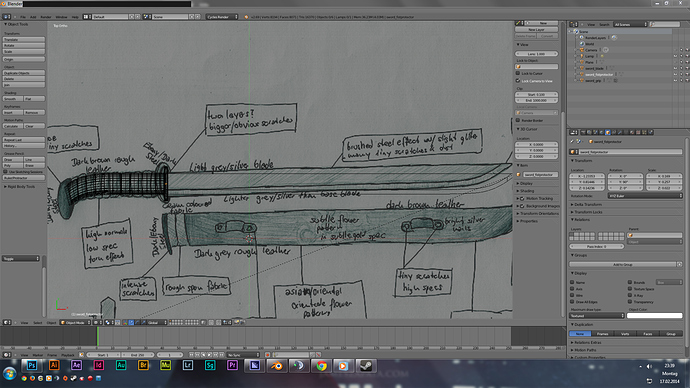 Anyways, thanks for torturing yourself through all this. I will post more soon(ish).
See you soon!
Cheers
ElensAnima

p.s. your sketches are fine, they do the exact job they are intended for

Also, it’s interesting seeing the design process. I suspect many people on here don’t even sketch out general ideas before starting (but they should!) so it’s good to see for a change

I´m pretty tired (yes, already) and I have work tomorrow so I´ll call it a day and cuddle my pillow.
I did a quick render of the current model, so yeah.
Night, guys! 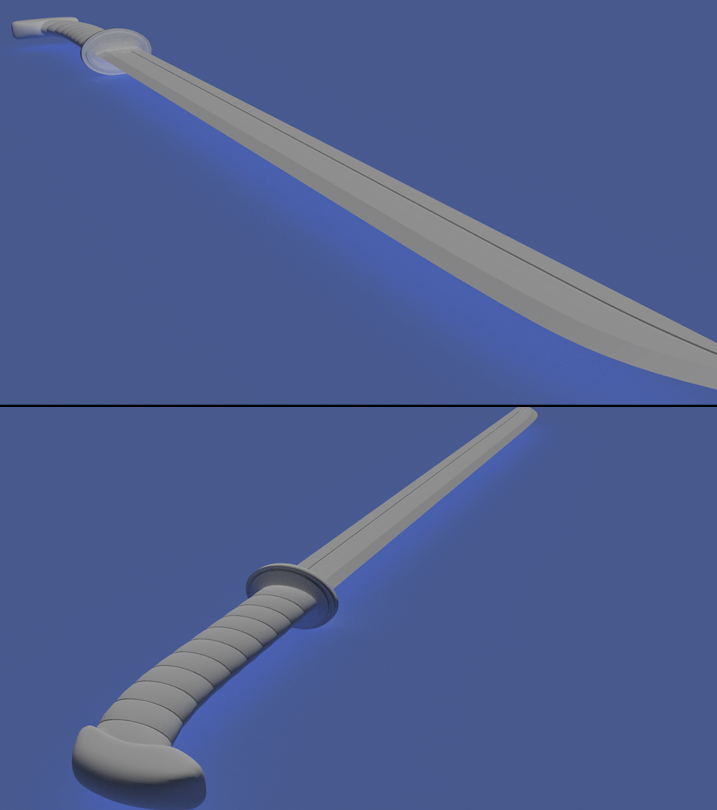 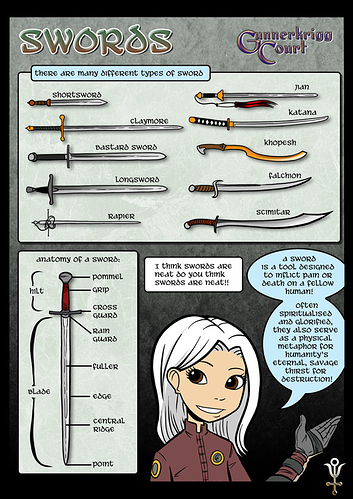 Oh, hi Orinoco! Thanks for that, clears up a couple of things for me. :3 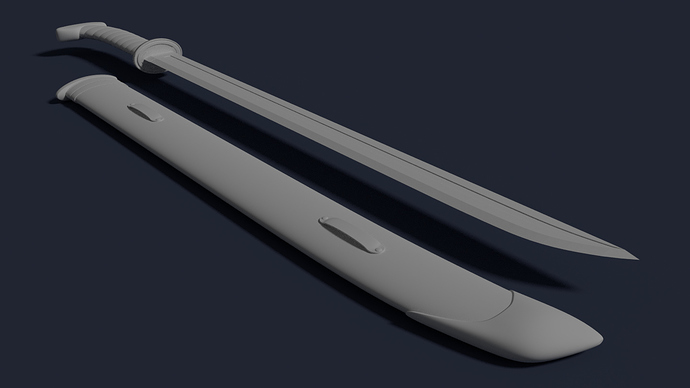 So I finished modelling the pure geometry of the sword and sheathe. At least for now.
I haven´t applied any materials yet and I´ll probably do that tomorrow evening (depending on my mood when I arrive at home after work) or this weekend.

(I also noticed that the model in the previous renderscreen I provided was kind of illuminated and I just noticed that is because I had forgotten to re-tick the “Cast shadows” note in the light settings after I wanted to test something.)

Anyways, I´ll post another update once I´m finished texturing the sword.
Thanks again to Orinoco for helping me with the sword terminology. :3

If anyone is interested, I can also provide a scan of the sketch I did.

Hey… Nice stuff so far. I’ll be modeling a sword soon, so it’s great to get some inspiration here on your thread. Your design drawings are cool and you should keep posting them.

Okay, so here´s the first textured version of the sword.

The textures need some improvement, I know. Working on it. :3 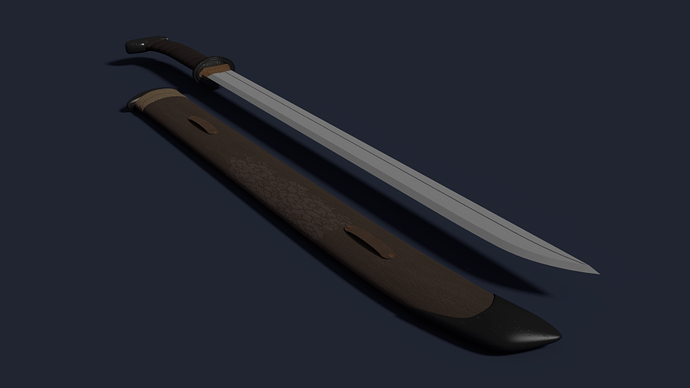 //edit
I just noticed the Renderimage is quite small and rather dark. I´ll update with a clearer image in a bit. Sorry, guys!

This is the final version.
@Shakedown: 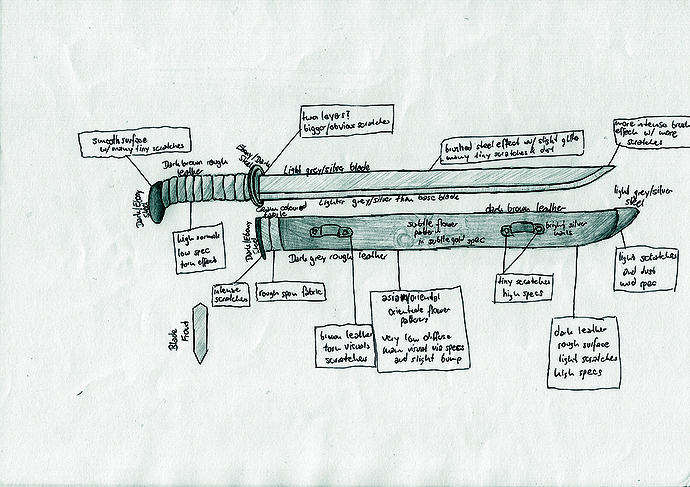 Hey…Looks great! Think I prefer the lighter coloured loops on the sheath rather than the darker ones!

I changed my mind. The sheath looked a bit too plain and simple to me, so here I´ve added some leather furnace that is also supposed to help strapping the shortsword around your shoulder/back/hip. 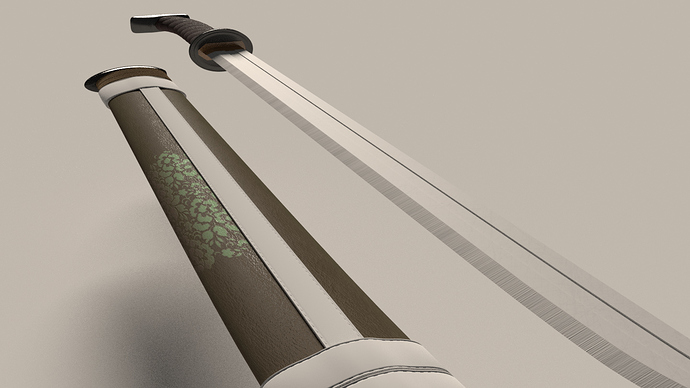 Have a nice evening/day, guys!
Cheers

Thats a nice sword…really like the form…the arrowhead however Im not too crazy about…you did mention “medieval” right? nothing about that arrowhead says medieval…It seems very contemporary. just a thought. the renders look nice…what is this all for? 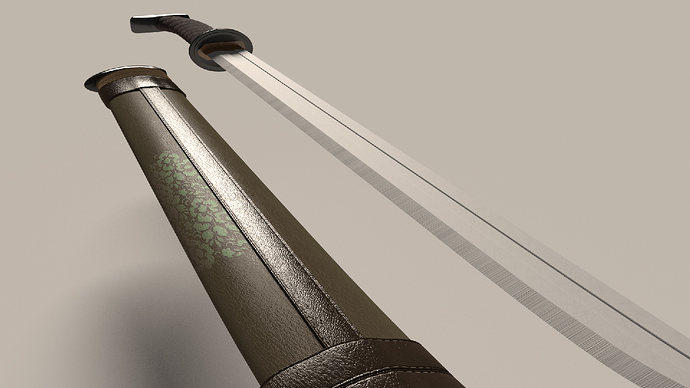 Cloud-Yo!
Thanks a lot! Yes I know, the arrow isn´t… historically correct. At first I had plain arrowheads like they actually used in medieval times. Those simple iron ones. (Did some research on that stuff. Luckily I bought a huge weapons encyclopedia when I was little) But it was a bit too boring to me.

I didn´t mention it at first but it´s not going to be a historically realistic character or setting. I was thinking about a fictional one, so I suppose fancy weapons and such shouldn´t be a problem.
I even thought about putting my Forest Scout into a combat situation against a witch or a mage of some kind… but I´ll figure that out later as I go. First I need my Forest Scout.

I´m glad you guys like it. People who have no clue about that stuff always say that things look awesome, but I suppose Blenderartists are a bit more critical regarding this kind of stuff.

Anyways, thanks again and see you soon!
Cheers
ElensAnima

quick update: http://fav.me/d792676 (deviantArt link because I rendered the image in FullHD and I think Blenderartists doesn´t allow images that size in the Work in Progress forums category.)

(It´s my first time posting my own thread on here, so please tell me if this thread is too long, too detailed (or not detailed enough), or if I should post fewer updates, and these kind of things.) >.<
Anyways

Have a good night/evening, you guys!

I hope you haven´t forgotten about me already.

Anyways, here´s a quick update on the armor: 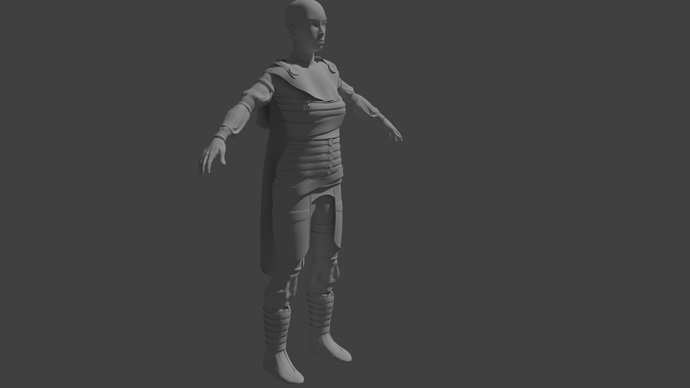 I think I´m done modelling it, now I´ll see what it looks like textured.
If I like the result, I´ll stay with the current model, if not, I´ll add/improve it.

So that´s it, for today!
Have a nice weekend, you all.
ElensAnima

Hi all
another short update:

I completely removed the previous armor (screen in previous post) and redid everything from scratch.
Because I wanted to. 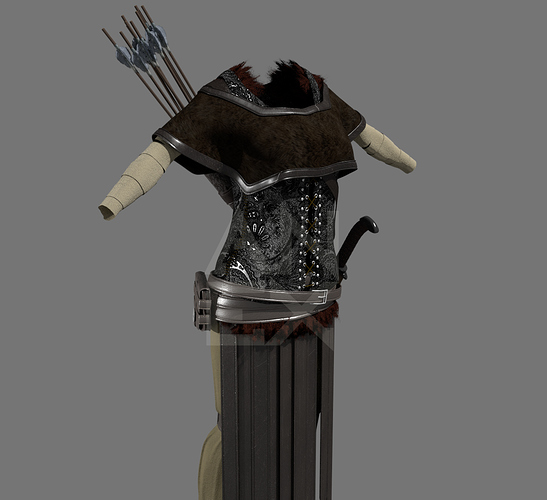 Now, don´t get any wrong ideas because of my watermark. It´s not that I actually think that someone would misuse it, but by now I spent far too much time, money, and effort into the project and I kind of feel like I HAVE to protect it.
I think the watermark is subtle enough to not obstruct the view.

Anyways, personally, I like it so far. What I´m not so happy with yet, are the shoes (not visible in the render), the pants, and the specularity of some of the materials, but I´ll fix that in the next couple of days.

Next up (according to my roadmap):
A knife (for quick self defense)
Some more pouches, maybe even a big bag.
Some detail objects (sews on the leatherbelts - and straps and whatnot)

When I like the result, I will move on to the face.

And finally, the background.
From there I might add more objects to the scene, but… I guess I´ll figure that out when I´m there.

In any event, I hope you guys like it and that you might even have an idea or inspiration for me, about improvements on the armor or weapons.

That’s nice. I love the way you texture.

Flowers look really good on the sword sheathe. Looking at that diagram, it would be cool if someone created a procedural sword generator.

Thanks, guys. I appreciate your feedback.

I just wanted to do another update on the knife. It´s not completely finished, I need to adjust the specularity, take it down a notch with those dents and holes and improve the textures overall, but well… 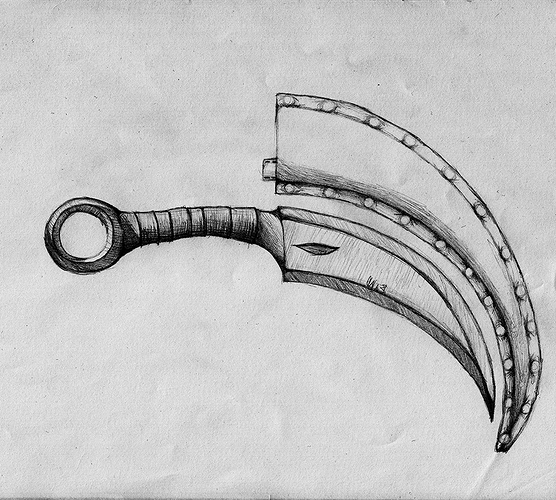 and execution so far 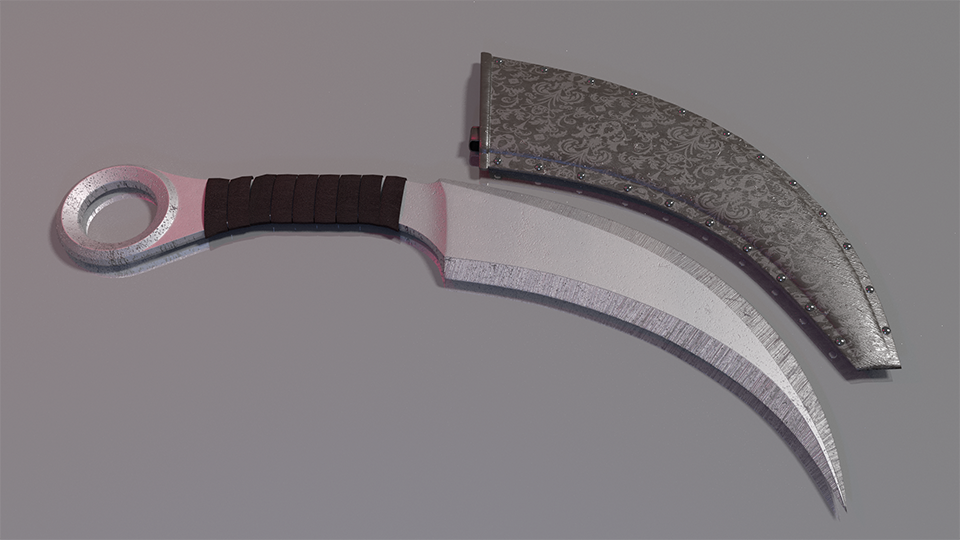 Yes, it´s a Karambit. For some reason (that is totally unrelated to Splinter Cell: Blacklist) I gained some love for Karambit knives. Anyways, good night guys. (2.28am here)