I’ve recently attended most talks (all free) at Viewconference 2013 (and also the preceding Viewfest btw), in Turin, Italy, which is where I live. There were tons of really good and high leveled speakers there (if you’re interested look here http://viewconference.it, bookmark it for nex year), showing really amazing tools and productions. One for all? this guy http://www.pauldebevec.com

But nobody spoke about Blender, sadly. Ok, but why are you posting this here? Let me explain, read along.

One the talks I also attended was http://viewconference.it/yiotis-katsambas, about a new, cool, product of “the foundry” (guess anybody knows who they are, here), called “Flix”. It’s an amazing tool defined as “Collaborative visual story development”, and it has huge features in particular helping distributed different departments in an animation production team to keep up with latest developments of a film or project, and earlier in the process. Somebody also defined it as “a cross between a productivity tool, previs, layout and workflow”.

It allows to keep versioned sequences of production shots (from bare sketches to animatics, to rendered shots), and to share edits and latest version of each sequence part online, through the web, adding sounds, comments, metadata to each sequence part (images) in order to make easier for each team to jump back (in the right editor) to what was used to produce that image (ie: when it stores (eg) maya rendered shots, it keeps track of scene and camera properties. So with a double click it calls the scene in maya and goe to that specifica camera pov, at that point… there you can edit something, render and send back a new version of the shot to flix. Instantly all connected team colleagues around the world are noticed, and can view your new result along the sequence the’re working on!

I feel I’m not able enough to describe well this complex tool by words, so if you’re interested, here is a good video that shows up pretty much what it was shown at Viewconference: http://www.fxguide.com/download/?force_file=/2013/06/Foundry-Flix-Interview-360-h264.mp4 (this was meant to play online here http://www.fxguide.com/featured/exclusive-flix-the-newest-tool-in-the-foundrys-arsenal/ but somehow is not working atm).

Now, to the Blender part:

I’ve read that Blender Institute is setting up its 6th open project, nicked “Gooseberry” for now, which is meant to combine studios and teams together to create a feature animation film together.

That made me think (and dream) that

why someone would need a storyboard software inside blender?

I agree, not inside Blender; however, if someone would do even basic storyboarding/production tool with Blender file support, I would be interested.

you can use pencil2d to do storyboards. Sure, its not not as advanced but it gets it done

why someone would need a storyboard software inside blender?

Why indeed… why would anyone making a film want a storyboard… has it occurred to you yet?

Storyboards are important in the film making process. Storyboards were made for Sintel (Blender Open Movie) for example, and storyboards will be made and used for the upcoming Gooseberry film using Blender.

Usually the artist would just create panels and draw within them within something like photoshop or gimp, and that is what has been used in the past and will probably be used for the next open project…but having it within blender wouldnt be a bad thing and it would certainly be used by film makers working within blender (if they follow the process of production).

I wrote a plug-in for Gimp a couple of years ago called Gimp Book. It was initially designed for working with multiple pages when doing comic books, but works equally well for storyboards. You can get it from here. 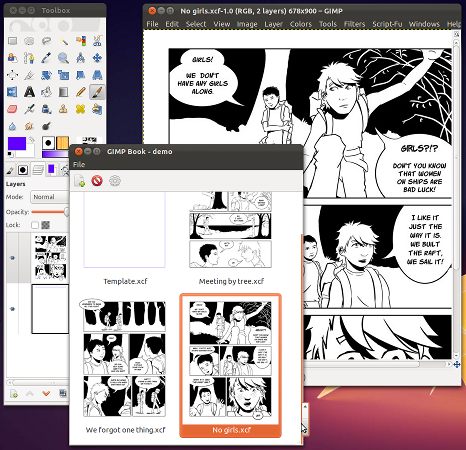 What it does is open a separate window with thumbnails for each page, where you can manage multiple pages, open them, change around the order, add or delete pages, import and export pages (including cropping and scaling) and more. It should work equally well for storyboards, as for comics.

It doesn’t contain the cool collaborative features of Flix, or the fancy online element, though I guess you could always throw your Gimp Book files into a git or boar repository, and collaborate that way. It stores it’s data as a simple json file, which are easy to parse, and the images as standard .xcf Gimp files.

I’ve sort of been wondering if I should add more storyboard centric features to it, such as timing and playback, but as I’ve only used it for comics so far, I haven’t really focused on it.

Maybe it’s something the Gooseberry team would be interested in using for their film.

The same can be said for blender’s game engine, or its video editor. I’m not saying it should be in Blender, but more on the point that it can be used in blender IF someone wants to stay in Blender and not have to learn another application for that purpose. Blender seems to embrace unifying an entire pipeline in one app, if so seeing something like Flix in blender would fit within that mentality. Additionally, you would also have to think about how being part of a unified asset creation application can be beneficial, just because you cant see a benefit doesnt mean there are none. Imagine creating a basic scene (or kit bashing/using an asset library) and taking snap shops of camera angles which automatically go into an array of panels which includes an input for time, page (of script), scene, even description, which can then be easily printed out or exported as a pdf.

If they use story boards, and need them for their projects, there already exist then a reason for it to be part of the application. That said, this isnt an argument for it being part of Blender, personally I dont really care outside of development resources being used for something like that. Playing the devil’s advocate however does reveal that a good argument can be made for its inclusion by those who would use it within a blender pipeline.

But to do it right you want somewhere to enter stuff about scene, shot, dialogue, sound, notes and other miscellaneous stuff. So if storyboards can be an extension of images which those sorts of notes can be attached to, that could work. Could possibly even be done within a Python add-on. Possibly.

I mean looking at something like Toon Boom’s Storyboard… it’s nothing special (IMO it’s crapware to attract you to the Pro version) but it still sells for $199 at full price.

I’m looking into this at the moment, I’m only up to the concept/ idea generation stage at the moment, but in the future I hope to develop some tools to do something similar to Flix.

I think it has huge potential, and it seems like such a natural, fluid way to control the creative process. It seems to strip back a lot of ‘behind-the-scenes complexity’ that typically comes with management tools; a nice simple, image-driven interface to keep track of revisions, and a simplified linear view of the animation seems to be a really nice, fresh way to deal with it.

At present I’m working on an animation with a manual setup similar to flix, once I test out the workflow I am going to try and develop a tool, either with Python, or some form of add-on for Blender that allows the arrangement of scenes/ shots, along with revision tags/ meta-data, and automatic revisioning of files/ folders, and to make this collaborative across a network. That’ll take at least 6 months though, if not longer, to fully develop into a working item.

In the meantime I will continue to work on a viable manual setup and share this information at a later date.

EDIT: The foundation, as I see it, for a successful pipeline/ workflow is a focus on iterations - make that as easy, and simple as possible and a lot of issues, especially when you use Blender as a go-to application, tend to be minor problems to solve.

I’ve often wondered if you could integrate film scripts with the vse for timing. That is an auto scroll set to markers perhaps or shot/blender scene changes in the vse. So you could reference shot description or dialogue against animation.

This could be extended in the text editor to allow annotations and import /export of appropriate script formating.

I wonder if a text block could execute a function other than autoscroll display, like triggering a storyboard element change?

What does Flix cost?