FP no collision with armature character

I have FP and when I bump into the character with an armature it doesn’t fall over, if I bump into another with a no armature it falls over. They both have collision turned on.

I even removed the head part from the body of the one with the armature, as I want to be able to remove it in interaction, I imagine it would function parented?

When an object is parented to an armature, it doesn’t have collision physics. This is because the child acts as an extension of the parent where physics is concerned. Since armatures aren’t physics-linked objects, the model won’t be one, either.

What you’ll need to do is set the armature up as the child of a main “bounds” object and place the object inside of it. Make sure the physics type on the model object (the child of the armature) is set to “No Collision” or else you’ll have performance problems. 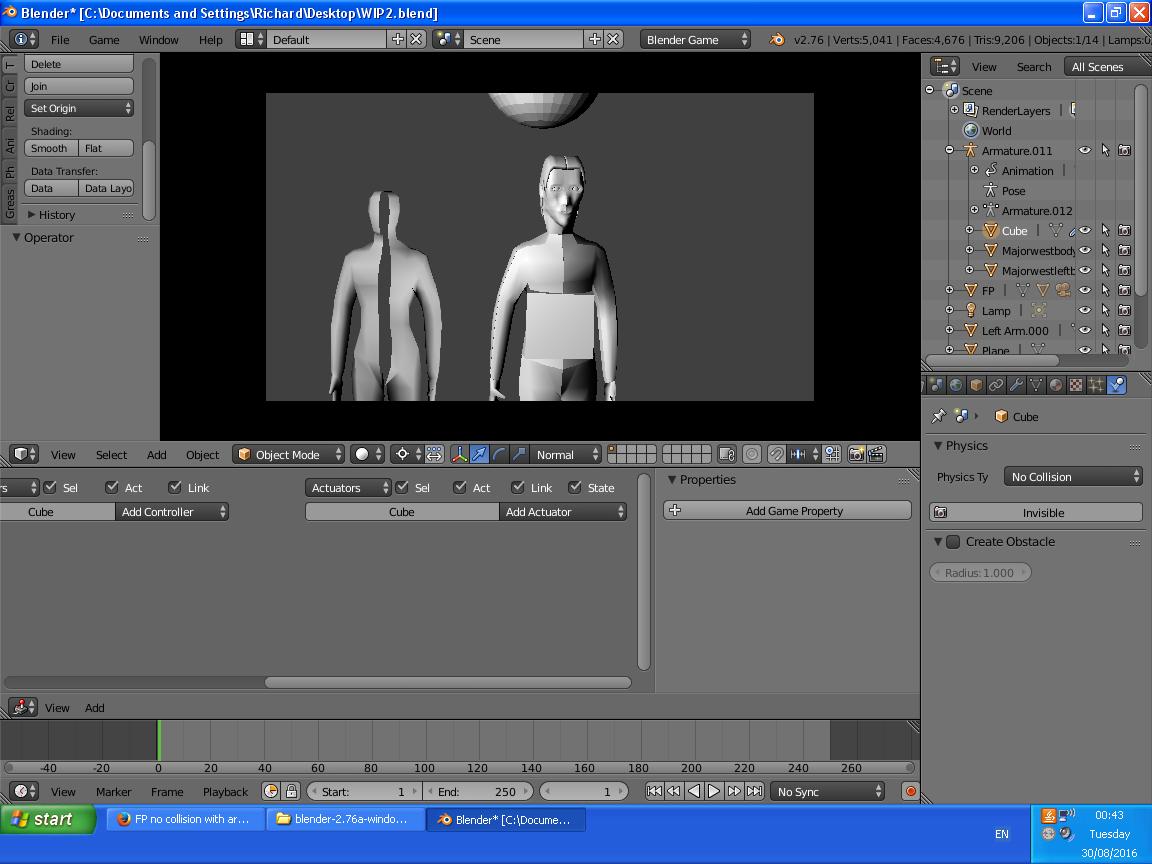 Okay, so I threw this together for you: 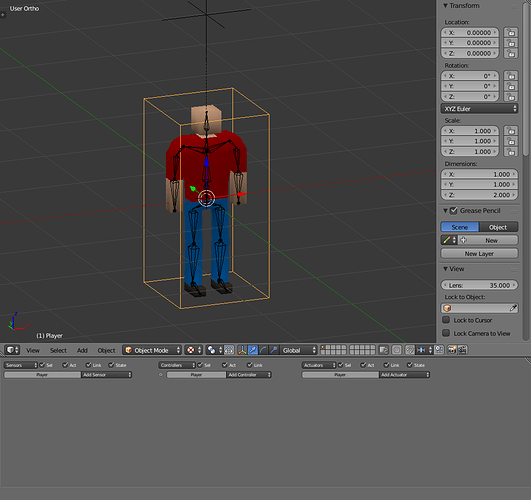 There are three objects total here. The highlighted box is the actual “player” object (or the “bounds” object I mentioned before), the object that does all the walking, getting hit, touching things, etcetera. The model and armature are parented in the typical required animation heirarchy, and the armature is the child of the “player” object.

Ah right. So that is what you meant by a cube. It didn’t make much sense.

The mesh will be the parent is what is change.

As for interaction with a character, I only know of the stab attack. As for hitting the character, and this is again using the bricks and 3D objects, I imagine a separate animation is needed for that effect otherwise it would be an end object, so the character falls down.

I have done this. So whether I kick or walk in now the body with the armature falls. As for the head I made that seperate, as I want to detach them. They don’t have animation.

So I guess, if I parent it to the mesh, that should be fine. As for animating the skeleton as it is no longer the parent, how does this workout? The armature is poorly animated, but regardless it works for movement. I want to be able to bump into a character, yet it needs to be able to move around like AI.

you finally found someone who did the exact same as i did for you with your other blends xD
so i was right the whole time :P.

anyway not a big deal

The armature is poorly animated, but regardless it works for movement. I want to be able to bump into a character, yet it needs to be able to move around like AI.

ALL movement options go on the cube, so you can build the whole behavior on the cube. The animation will be set on the armature, animate it like you always do, and use the action actuator and the other bricks to let it play the right animation.

you can keep movement and animations separate(movement on cube, animations on armature) or you can link the armature and cube together(click armature->shift click cube) and link the cube sensors with the armature actuators (this saves allot of bricks ,thus resources).

you finally found someone who did the exact same as i did for you with your other blends xD
so i was right the whole time :P.

anyway not a big deal

ALL movement options go on the cube, so you can build the whole behavior on the cube. The animation will be set on the armature, animate it like you always do, and use the action actuator and the other bricks to let it play the right animation.

you can keep movement and animations separate(movement on cube, animations on armature) or you can link the armature and cube together(click armature->shift click cube) and link the cube sensors with the armature actuators (this saves allot of bricks ,thus resources).

Ah I see, that is new news to me that is for sure.

I know how to shoot, so may be a stick will shoot to detach the parented head on the character. The illusion of hitting.

What is the alternative? I of course want to hit a few times before the head falls off.

Cotax beat me to it, but yeah. That’s what Michelle and everyone else was trying to tell you.

Too add;
When you rig, (parent mesh to armature) the mesh and armature should always be at zero.

To fine tune the armature mesh deform. Select the mesh, go to edit mode, make sure no vertices are selected, in the data tab, under vertex groups, select a bone, then click the select button, the vertices that are assigned to that bone will light up. I always manually select vertices to assign to each bone, because I don’t trust blender to do this automatically, Go threw each bone to make sure that it’s vertices are assigned correctly. you can assign more vertices, by selecting them, and clicking the assign button, or remove them with the remove button. deselect all vertices, then select the ones you want to remove, click remove button. I always do this with every rig.

I still have the example files, but they make no sense to me.

Okay I have made my hitting object with Arm2, so Arm 1 has a gun.

I then want to remove the arm 2 so I use the scroll wheel up or down, only removing it works, but to get it back as to cycle through a weapon. So wheel up is to add in the arm 2. That isn’t working.

I’m going to be using five arms, each with different animations and objects.

i keep saying this, you try to build a game that you dont even know howto yet.
Start with simpler stuff, really you need the basic understanding of how to build something like that before you actually start and try to make it.

So “shoot a few times” means you need a health bar/property. “cycling trough weapons” is a total different story, add/remove object(actuator) is in your case the best to start with.

I’m sure it can, that is where I learnt what I know vidoe tutorials are better than forums, but sadly the knowledge isn’t all there especially using the brick setup only. So I had to jump between the two, and a little from the Game development book.

I feel I can try and learn along the way, just using cube examples always isn’t going to get what I want.

One weapon isn’t really enough for the project.

Use this template -> http://opengameart.org/content/3rd-person-blender-sci-fi-pack
Youll need to know python too. So you gonna have to use LB + Python.

I thought it was possible to create a game without actual code? I can’t do what I want without it? That was why I tried this all out, as I have mentioned in the past.

Why would I want template? I’m trying to do a FP sandbox demo, using a free character model with my edits.

Can I achieve a racing game and a sandbox game with no code? It is possible to create a game with the bricks, I have done it, but obviously not complicated. I know code is needed for an event once a player has been knifed, unless it is just a health reduction and then ends.

Can I create a fire effect that the player starts with the bricks? Fire can be made without code, no doubt as I tried an example a day or two ago now.

I’ll have to rethink my ideas as scratch made, with copyright free, royalty free content for detail, using the bricks if I’m going to be able to create new stuff as is since python is a must. I just thought if it were possible to create some complex games there would be examples, all the examples I have seen are very basic with little or no code used. The zombie game from a couple of years ago rings a bell.

It is possible to create a basic race car game using the bricks. It would take a quite a lot.

Yes, it’s possible to make games without code. It’s a touch less plausible to make complex games without code. Tetris, Flappy Bird, Snake, you can make stuff like that purely with logic pretty easily. I’d even argue that you could make something like Binding Of Isaac sans Python in the BGE. But you’re going for something a bit more complex than that.

Sure, it’s possible to use only bricks, but it’s poor design. You’ll go back to your bricks after two weeks and go “Oh my lord what did any of this even do”. This is why Python is there, not just to add advanced functionality to your games but also to help clean up some of the mess and clutter bricks can create.

Bricks are great for those first starting out, but eventually you’ll start seeing the limitations they impose and start looking into Python. Simply going “pft I can’t code now and I never will!!1!” won’t get you very far, I’m afraid.

I have seen a handful of examples on the video site yesterday. I would like to give it ago that way, that was my reason in the first place.

I know I seem stubborn about this. If I’ve taken while to get with the bricks, I still have quite a lot to learn about them. It doesn’t help there aren’t much examples. I have seen an inventory example, not quite what I need for multiple arms cycle through for a particular object.

Here is a test clip of the race car. https://youtu.be/1uyjudhMVmU