So I used a plane and subdivided this before, and then after subdividing for a couple of time used the fractal tool. That made it look something like this: http://imgur.com/v1M11QL

That looks fine to me, since what I wanted to create was this lowpoly water thing. However I have now tried to do this again, with the effect same steps. But now when I use the fractal tool it does not do anything to the height, but instead just make weird spins in itself. Like this: http://imgur.com/4HflHwG

I have changed to the metric system and some small stuff like that to be easier to work with for Unity, however I have no idea why this stopped working. Does anyone here now why my fractal have stopped working?

Set the ‘Along Normal’ value to 1 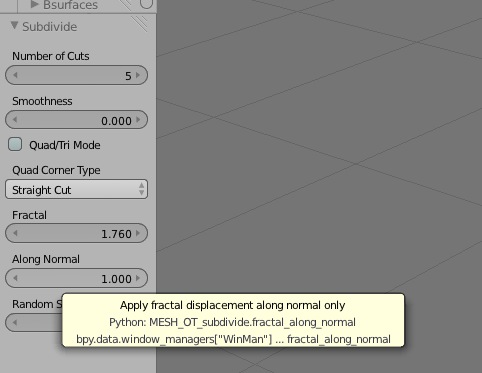 For further help supply a blend file of your scene

Set the ‘Along Normal’ value to 1

For further help supply a blend file of your scene

Thanks for the help. That made it kind of work.

However it still does not really make a huge different in the height. Is that because I changed to the metric system and my plane is 100 * 100, since it is supposed to be the base of the world? Or do you know if it is anything else.

As you see I have fractal to 10 and still almost nothing. I need to go up to 50 for it to make some more changes, but then it makes drastic changes.

However I have another problem, as you can see on this image: http://i.imgur.com/MkX4l2K.png almost nothing happend even though I changed this. I have to use a much higher number like 50 or 60 for it to make a change, and then it does a huge change.

So my questions are:

The reason my model is so big is since this is going to be the ocean of my level.