I built a lego house for a game environment, and it is pretty high poly for a game. However, it displays out of game just fine. In game, when the camera is pointed at it, it slows the framerate way down (I am using a mouselook script). Makes sense right? Strange thing is, Logic, in the profile, is the only value that goes up. I have no logic attached to the house models, and it is made up of only a few objects.
Wouldn’t a different value go up if it was having a problem displaying the number of polys?

Post an image with the profiles visible (framerate and profile)

I’ve had a similar issue before that was caused by casting a ray at a high poly object. Are you casting any rays at the Lego house?

I was, to open doors with mouse over, but I got rid of that when I noticed it was lagging. Maybe the mouselook script is casting a ray? 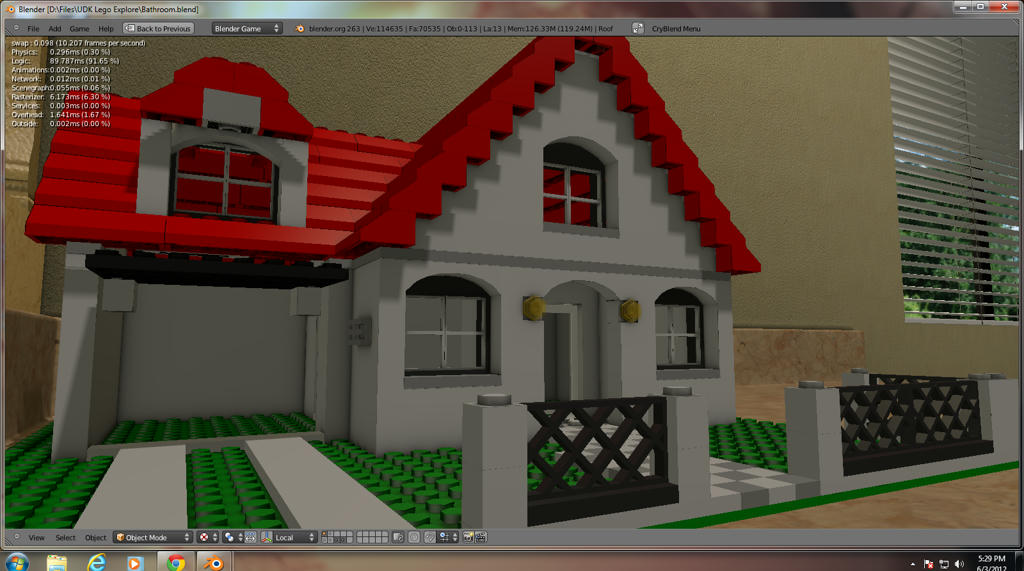 Thats the reason, mouse over is an expensive .sensor, if you want it to work better do this:
Select all the house,join it but leave the doors, and after u joined them go to physics tab and select no colission. You can make collision masks from simple cubes( joined ofcourse)

Mouse over sensor needs to analyze each face when you point to thaf house, if you have many faces the more logic usage.

However,if ther is no mouse over logic…still try and join.

I would recommend, like BlendingBGE said, joining all parts of the house mesh except for the doors, leaving them individual (so that you can open one of them, but not all of them). For simplicity, I would make an invisible physics mesh for each door and one for the house - this way, you can collide with the house and still retain speed when mousing over things.

EDIT: Yeah, since casting a ray relies on physics, it would be recommended to keep your physics meshes as simple as possible. Also, there’s not any errors in the console, right? The logic’s really high up there.

EDIT 2: And this, again, looks really cool. I like the Lego perspective.