Recently I’ve been given the opportunity to come take a look at the archviz department of a large construction firm, so I quickly needed a nice portfolio piece for the occasion.

I must say the image itself is rather bland, but hopefully it succeeds on a more technical level.

Like the title says, it’s inspired by the work of Frank Lloyd Wright. 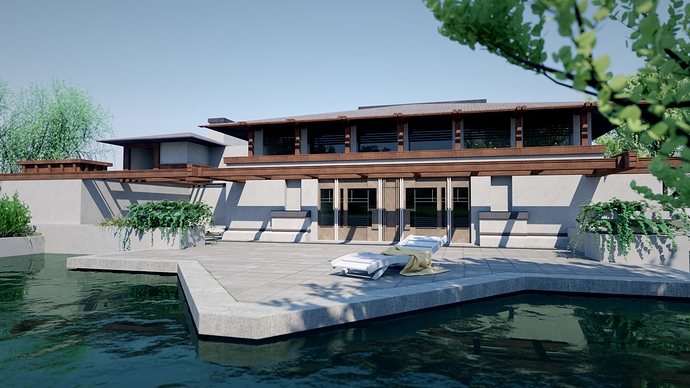 I think it’s really realistic, and holds up quite strongly. If you’re happy with it, that’s all that matters!

My only gripe would be the composition. If you feel it’s a bit bland, it might be due to the camera angle. There’s a lot of dead space in the upper left. Perhaps positioning the camera further to the right so that we see the building on a steeper angle would create more dynamism. Also, tilting the camera down would place the horizon on the upper third, rather than dead center. And maybe switching the foreground tree to the left would fill out some of that space.

These would just be suggestions if you wanted to take the image a bit further.

Very nice, realistic result You got there! Like Illusionist said the image is a little to heavy on the right - maybe adding some ducks on the down-left corner would balance the composition diagonally. Try adding some postpro tricks - vignetting, bloom etc.

I love it.
Beautiful work.
My crits on trees, they can be better and add a lot on this beauty.
A tip? Foliage is not that green, never. More green-yellow, less saturated, more translucent, a little more transparent maybe… still searching this.
My *5 for this.

In Europe, and especially in Italy, wherein I live, this image reaches a pro level for a small/middle sized Arch Studio. Larger firms are more exacting, usually. I share the opinions about foliage, even if i find it altogether adequate. You could make a short with light shifting along the day, this is usually well received.
If I may ask, why CPU? If you have an ATI card (and/or a Mac) try Unsopported without CUDA.

Thank you all for your positive responses! I’ll revisit this project soon thanks to your helpful advice. Adding the interior for instance, and changing the setting to autumn maybe. Then the trees will be a bit more colorful and warmer, add some dead leafs in the water. Clouds in the sky for some more variety.

Zander: The scene, after the trees were added, became too large to fit inside the memory of my GeForce GTX560 Ti. Render times on the CPU are acceptable for still images though. Animations however

Not much to add beside what others said, but did not follow the site lately and was trying to catch up with all the new great work. Couldn’t miss commenting on this, I like it very much! A little splash of color would improve it like already said, like a brighter green and some colored plants or in the blanket on the chair. Maybe some color twitching on the whole image, as to warm up a bit the grey walls, though I like how the materials turned out.
Nicely done, should get you the job!

this looks very nice! I like how you cared for small details, like making the tile textures a bit skew and stuff. The mood for me is the main goodness here though. Good goodness!