For the last couple of weeks I try to create my favourite singer, Freddie Mercury, in 3d. Of course I start with the head, and I want to go further after I think the head is a real tribute to him.

Can someone please give some critics on the head? Thanks in advance.

Oh, just one more small thing. I know that Freddie was gay. Please, no gay-bashing, fag-fragging, ‘All gays rot in hell’ type of replies. If I wanted to read that kind of replies, I would have posted in another forum. Thank you. 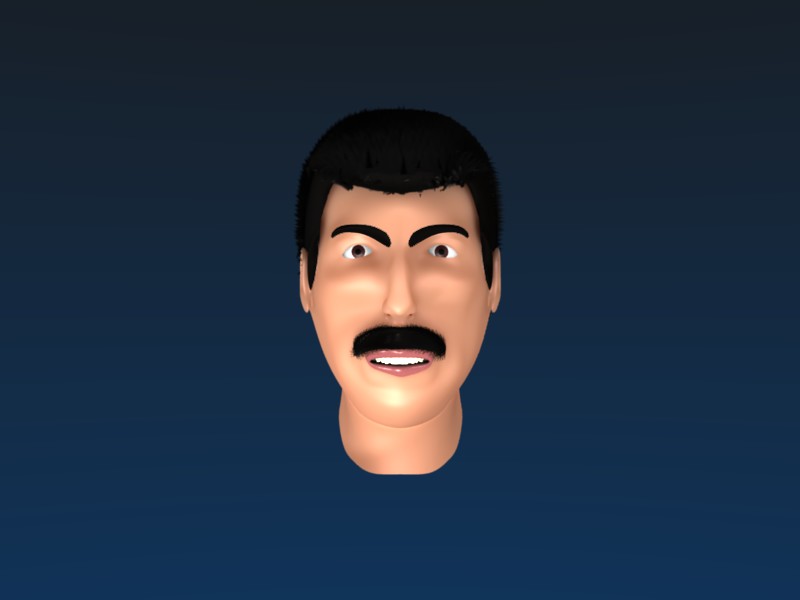 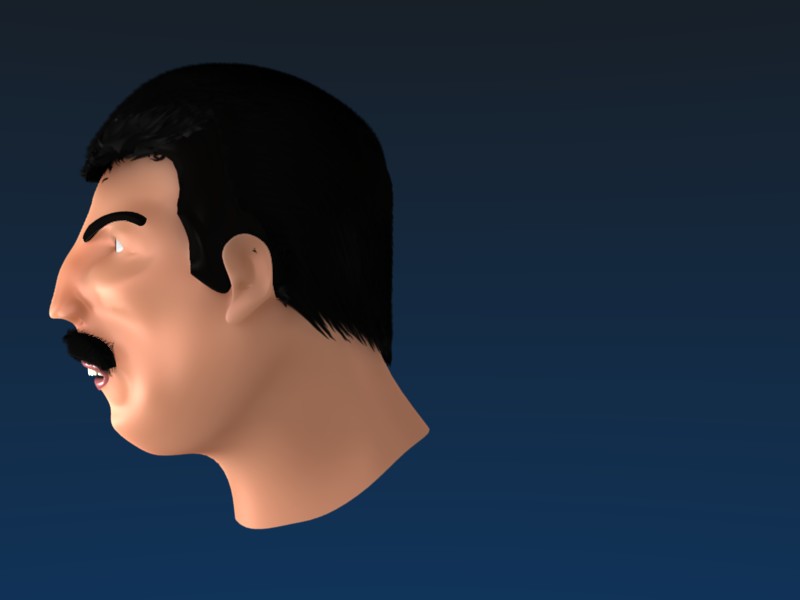 Yes, we are the champion my friend, keep on fighting into the end, you gonna make…

Well, Freddy is also my favourite singer, so…

I think you need to adjust the profile, especially the shape of the nose. From the front view, he doesn’t look that bad.

Maybe from front view he had a more square jaw.

You could help us by posting some of your references

His eyes were set high in their sockets and you could usually see the white between his iris and lower lid unless he was squinting, which to be fair he did a lot.

I used a tool called Faceworx to make animated heads of my friends band, it worked out really well but still needed modeling after the original import. you can export them as .obj files then import them into blender.

I also think his nose was straighter, but what you’ve done is very impressive. Kudos!

Thanks everyone for the replies so far. I will do my best to update the head according to the ideas you gave me. I will also post the references I used, although it is pretty tough to find some good references.

and again, thanks for the compliments, they are also very welcome :yes:.

Jack
Edit: I uploaded the reference images I used. 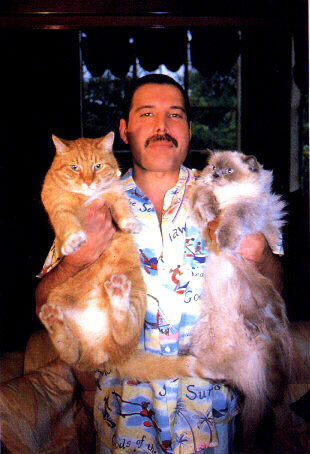 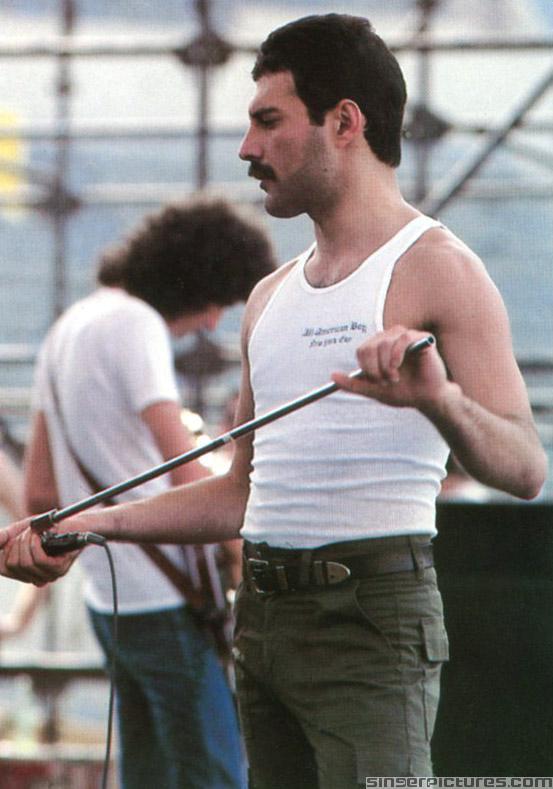 I was considering doing Freddie for last years ‘Blending Life’ comp but struggled with references myself. Even tried screen captures from a concert dvd.

Your topology looks like it might be working against you, particularly the cheeks. If you could post a wireframe of the model for the front and side that would also be quite helpful. Perhaps take the side reference image into photoshop / gimp and enlarge it a little and draw on where you think the contour lines of his face would go and see how your topology looks compared to that.

All the best with the model though, I will have a quick look to see if I have any clearer reference images.

I didn’t end up with much like I thought, but there are some of a statue that show up his face a bit clearer form wise.

Again thanks all for your tips, and especially thanks to BenDansie for searching the internet for references, very nice of you, really.

I reverted back a couple of versions of the mesh, mainly because the way I did the hair was not a good one. Now I have a mirrored face (so I only have to model half the face) and a particle system for the hair. That is the reason why you only see one half of the mesh being ‘hairy’ of something like that ;). I also made a wireframe screenshot and I provide the blend file, for all to see, use and make better

Tips and tricks are still welcome ofcourse. I will post more when I got more :). 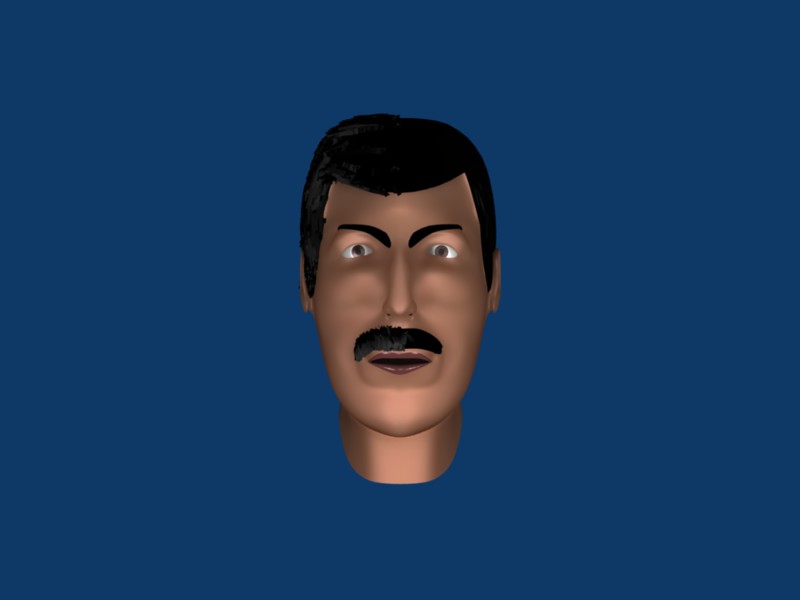 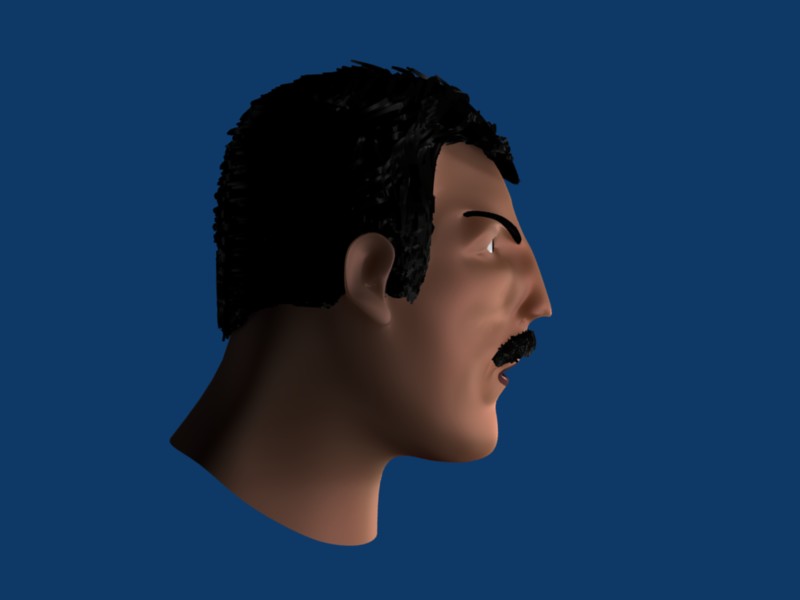 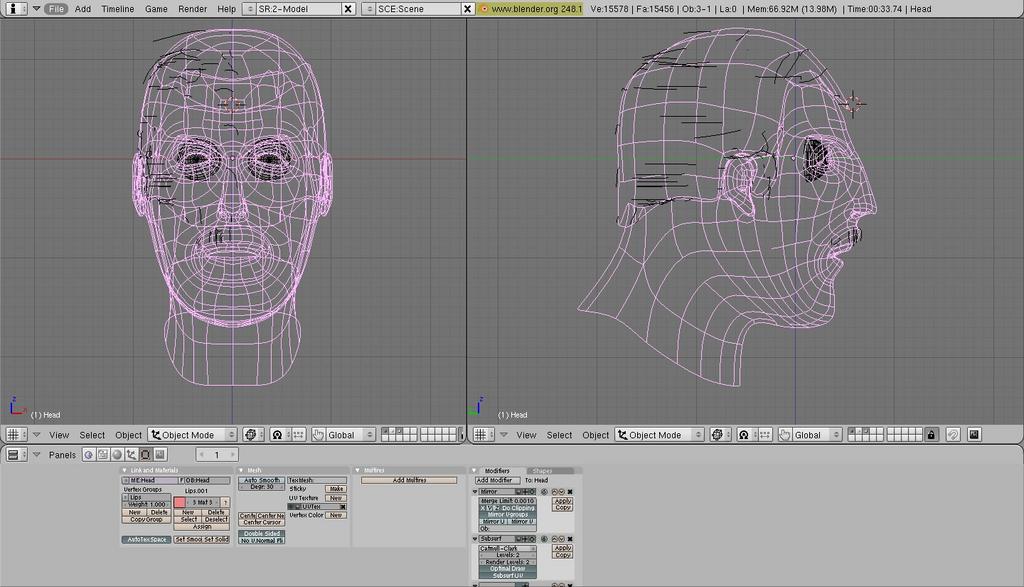 Here I am again, with a little update of my DigiFreddie (as I refer to it most of the time). I take my time with the lighting. Hopefully someone can help with the lighting on the eye. Thanks in advance.

@BenDansie, could you explain what you meant with “Your topology looks like it might be working against you”? It would be very helpful for me, especially since your part of the Durian team

(and I already ordered the DVD 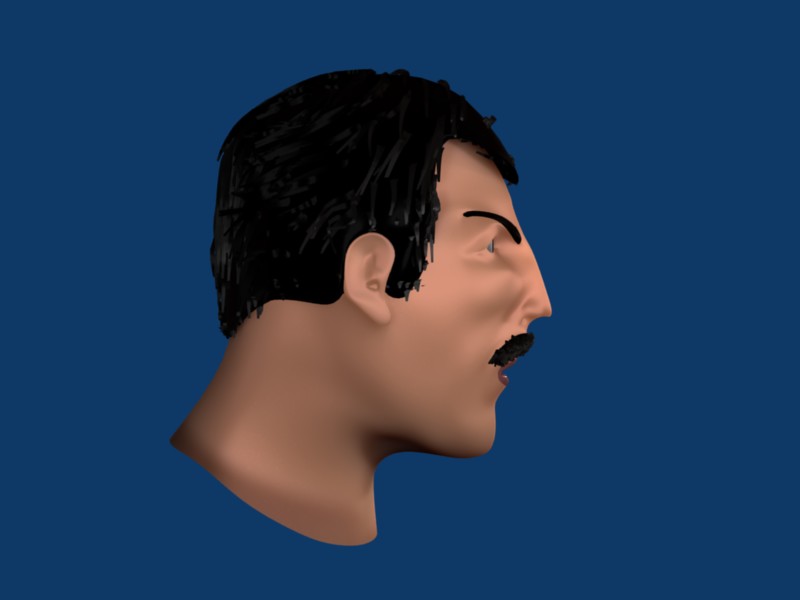 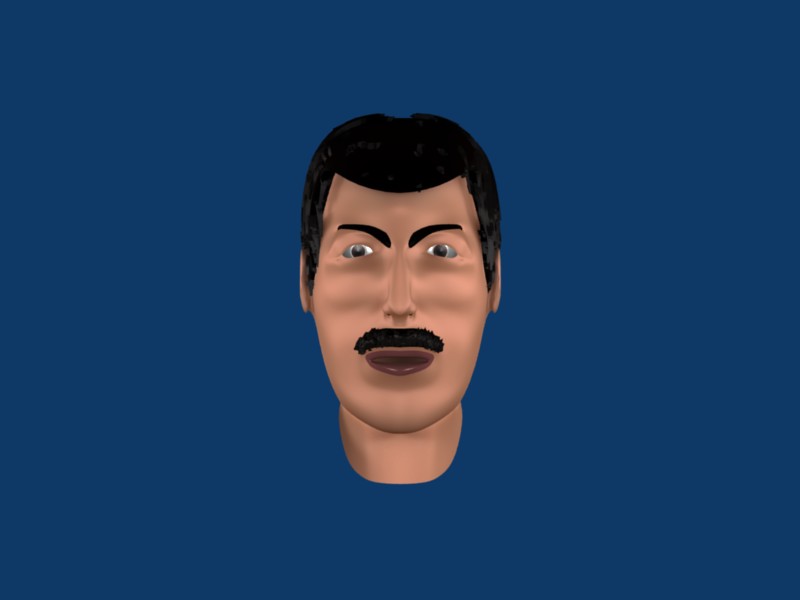 Umm, I got a little carried away with the file you posted. Made the mistake of loading some Queen music and just kept going.

I would keep the eyebrows and moustache as separate meshes if you are using them as meshes. Either that or grow particles straight off the face.

I made the topology comment before you posted wires because the shadows on the cheeks didn’t look quite right. Overall your topology isn’t too bad, but you can look at the file I posted if you want. Mainly the way the nose, cheek and mouth all connect up.

I know what you mean, with carrying away when listening to good music ;). Anyway, I downloaded the blend you provided, and compared it with my own file (Multiple workspaces, you gotta love it :eyebrowlift: ). I tried to copy what you did more or less… Here is my result. 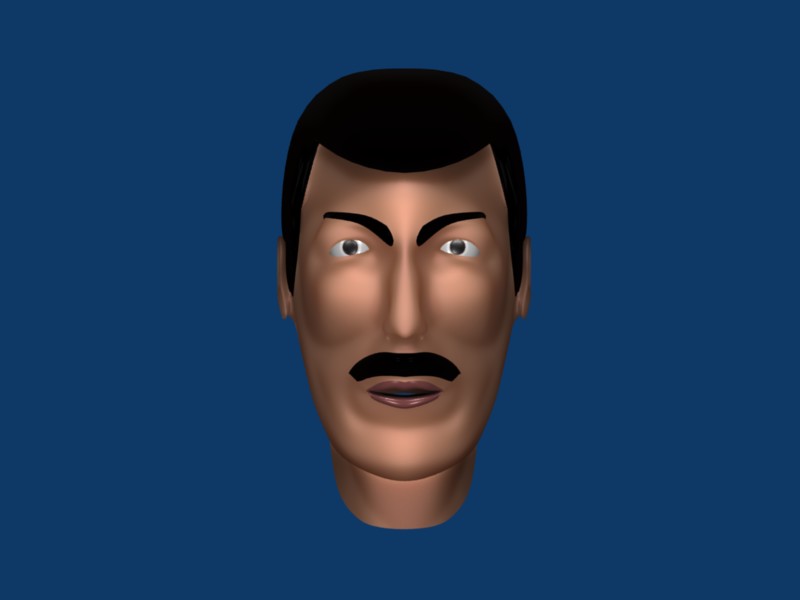 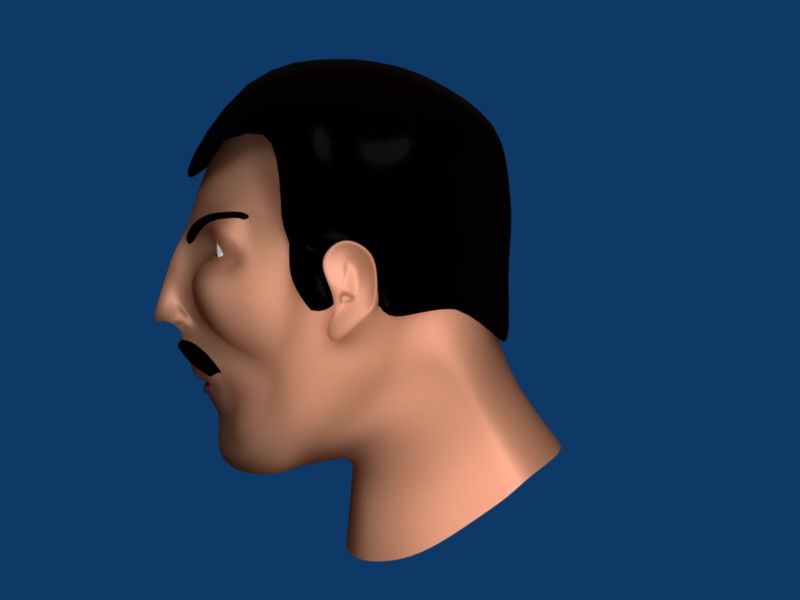 It has been a while, I had some other things to do (don’t you just hate it when you have multiple creative hobbies??

) I have changed my DigiFreddie a little. Hopefully someone will see it and can comment on it :)…

As always, thanks in advance 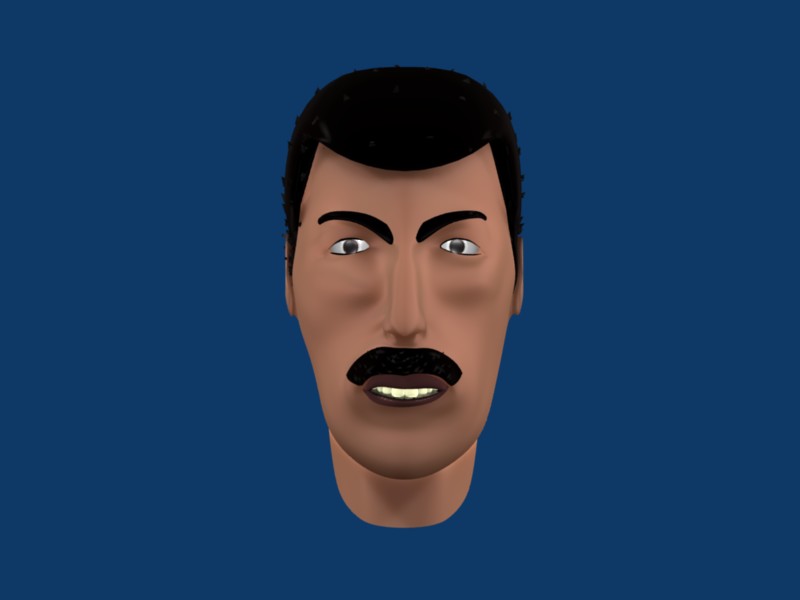 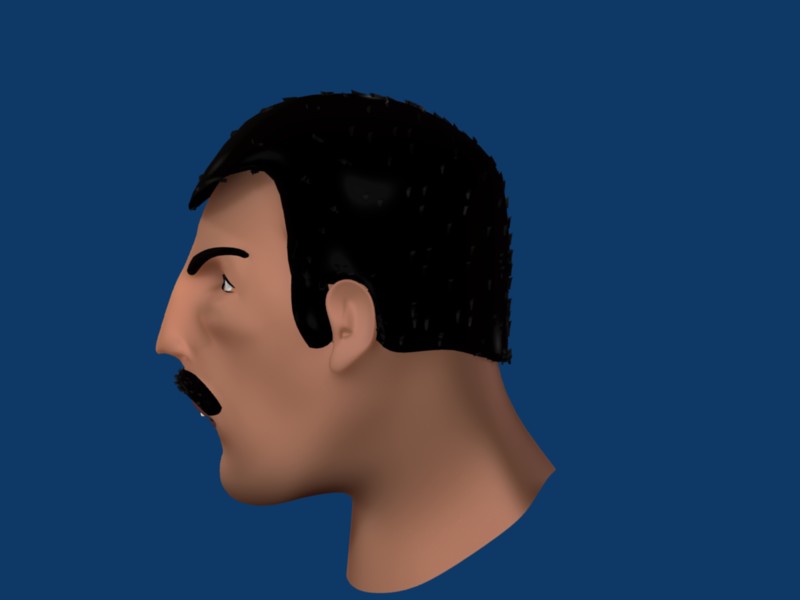