Hello everyone.
I modified my previous project “Scared Apple” to a usual fruit plate because I thought maybe this image is also a good still life. So I removed the characterized apple with the worm and there it is.

I made this project in Blender 2.8 Beta and rendered it with cycles. I used blender’s denoiser for faster rendering.

You can find my previous project under this link:

I’ve been working on it for over a month and now it’s done. It started with a simple idea and sketch about a worm that comes out of an apple. I continued with a rough layout, modeling and texturing of all objects to the final layout, lighting, and compositing. I modeled and textured all objects myself. I have oriented to reference photos or real objects. The image was rendered with cycles at 2000 samples. The post-processing took place in Blender’s Compositor and then in Gimp. I used Blender 2…

I’m looking forward to your comment and hope you like it. Of course, as always I’m open to criticism, to improve me as an artist. 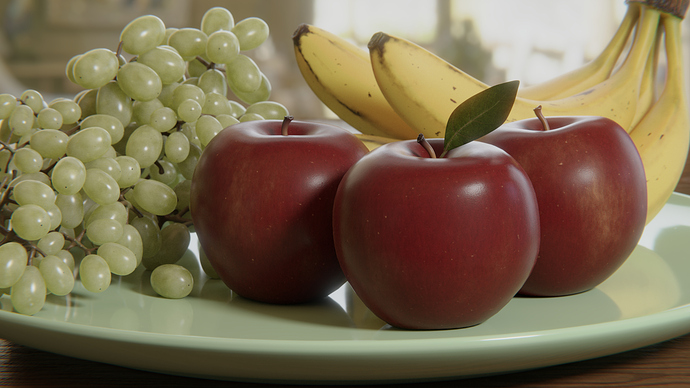 The bananas in the background look really good but the apples and grapes look a bit too fake to me. Something about them that looks too clean.

I think it may have to do with the fact that the grapes and apple don’t have slight detoriations like the banana does, so they seem inconsistent with the banana.

The plate can also do with some improvements in tiny details and slight imperfections of some way.

Overall great job still and thank you for sharing

Thank you very much for your comment. You are right, they are too clean. That’s really a good point. Of course I could say, the grapes and apples were just bought and the bananas are just a bit older, but this imperfection would add more realism to the image. I will consider this in future projects.