Hello! I really need a little guidance. I have been modeling in Sketchup for years, mostly straight-line architecture. It is my passion. But lately I have really wanted to move into more organic modeling, like furniture and fabrics. I am having a really difficult time making the transition to Blender because I don’t feel like I can model as accurately. And when I use Imperial units, not all the tools seem to follow suit (ex. Measureit). I’ve found myself trying to model furniture in Sketchup to get the accuracy, then bring the exported Collada file into Blender to add modifiers and sculpt. This hasn’t been working so well because whenever I add subsurf mods, the edges go crazy, or if I remesh I get like 10 million faces. Let me show you what I have been trying to do, and maybe someone can tell me the best way to approach my goal. Also, any tips on making this transition are very much appreciated! 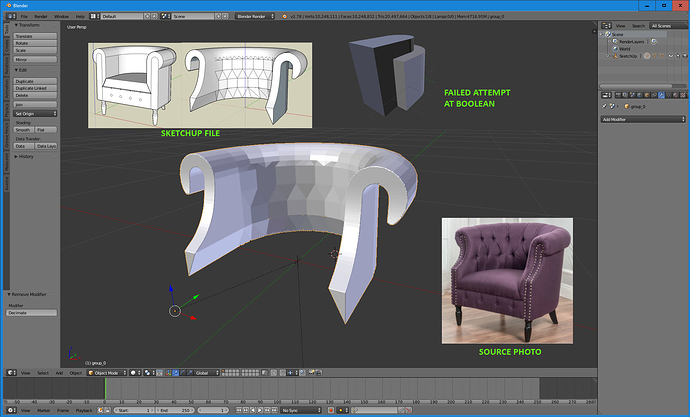 I have been modeling in Sketchup for years
Frustrated Beginner

The cause and effect

Unless something has drastically changed recently, Sketchup isn’t a modeling software. It’s a planning software that cuts corners to make it easier, “just edges and faces” as the website used to say. Which means that the meshes it puts out are shite.

Blender itself can be used in all pipeline stages so it’s vast, and that’s not the only unusual thing about it. If you haven’t already, check these https://www.youtube.com/playlist?list=PL0AfIdK08E7_PKsXOO_yuAql9b3hdcwPR
so you can manipulate the interface. The list also showcases some modeling tools, but not optimal modeling workflows.

Why learn Blender? Jason explores his reasoning behind giving the open source animation tool another shot.. and begins documenting his journey towards understanding it's power.


Can’t really teach polygonal modeling basics in a thread post or explain the pipeline, but could mention a few things

You haven’t mentioned the goal. What is the end use of the model (still image, animation, game engine, 3D printing, other (what?)). What is the accuracy you need and what you need it for? Whatever it is, there won’t be the best way, only options to choose from.

Polygonal modeling is a lot about correct structures and mesh validity. Which is why

The surfaces need to be error-free, which it probably isn’t when imported from Sketchup. How bad it is to fix or work with, can’t know without the file, but might be easier to make another one.

If you’re going to model it, you could model it flat and then bend it with curve, simple deform, lattice, mesh deform, or surface deform modifier.
One example of the pattern https://blenderartists.org/forum/showthread.php?245577-How-do-I-model-a-pattern-like-this&p=2049035&viewfull=1#post2049035

Could also model it curved, but adding the pattern can be a bit harder once it’s curved. In either case, should be able to model only one half of it.

If you’re going to sculpt it, going to need a basemesh for the thing. Blender has two sculpting systems, multiresolution and dynamic topology. If you use dynamic topology, the basemesh only needs the basic forms and proportions. With multiresolution it would be better to have correct flows already in the basemesh because it uses the same subdivision algorithm as subdivision surfaces, and it retains those flows, which in turn means lower subdivision level when the structure lines up.

Dynamic topology doesn’t create nice structures and if you need that too, have to do a retopology pass on the sculpted forms. Could also use that technique to clean up a messy imported mesh.

And this post is long enough, but here’s one more thing. There’s a tutorial linked in my signature about posting support questions. In short, images help you to explain things. Help others by including an example .blend file, which helps others with posting, and to look into your problem with the least amount of guesswork. Use paragraphs which makes the text part of the post easier to read, and easier to quote when replying.

I’m sorry, I guess I should have mentioned that I did the full a full day of the Lynda course, and spent a full day trying to model this chair. I am no stranger to this type of modeling. I used Maya 10 years ago, but haven’t done it since. Sketchup just happens to be what I have used on the job and has served my purposes very well thus far.

I do agree that Sketchup produces crappy meshes, which is why I acknowledge that I need a better approach.

My goal is to create a 3D model that can mainly be used in renderings, but also possibly gaming engines.

The .blend file is useless because I created 3 different ones, none of which were on the right path, so I was hoping someone would suggest what they might do to begin modeling this chair. I tried extrusions of a subdivided cube, but that wasn’t going well either.

I am sorry that I didn’t post the correct way. I am new here, and I hope that I can find some encouragement to continue learning this amazing software.

Thank you for the links.