FUBAR Rig and I can't find the reason?

So I made a basic dinosaur model and put a rig to it but it appears to be influencing random parts of the mesh (along with the parts it’s supposed to influence).

-My first thought was bad weights but everything seems to be ok (?) and I did my best to paint all parts to zero influence (shouldn’t this actually mean that it’s impossible to move any part?)

-The model is admittedly kind of crappy as it was more an excercise in rig learning than modellng. But bad topology cause the issue? But I hardly think it is and it’s not actually terrible.

-Am I making a bone hierarchy mistake?

-Could it be that it’s just the one mesh that’s randomly broken?

-I tried a different thing in the second attachment where I have fewer connected bones – same problem.

Known issues (although I wouldn’t imagine they’d cause rigging problems):

-I created a weird thing down the middle of the mesh with the mirror modifier.

-The legs don’t have inner thighs.

dino5 doesn’t have a rig. dino2 isn’t parented to its rig, doesn’t even have any weights, and the rig itself moves fine. What you should do in the future is give a copy of the exact file that’s giving you problems. Otherwise people have to guess what your problem is.

I’m looking at dino2. And what’s my guess? My guess is that you used automatic weights to parent the dino to the rig, and automatic weights didn’t work very well because your mesh has non-manifold vertices. Which, yup, is probably because of that weird thing you created with the mirror modifier.

What the hell. I must have deleted the rig accidentally before the very final save then (dino5) and I’m positive I parented it on dino2.

Sorry for the confusion.

In the meantime made another one even more quickly (attachment) and it works much nicer despite me having gone through the same motions but I didn’t use a subsurf on the mesh and it’s in version 2.78.

It also doesn’t appear to have the non-manifold vertices.

The body vertices have many groups and multiple non-zero weights 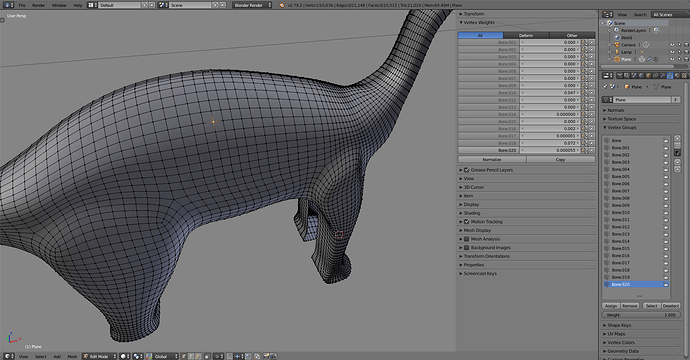 It also doesn’t appear to have the non-manifold vertices. 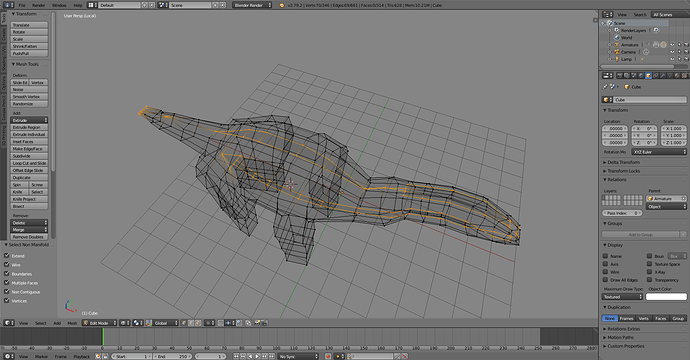 That’s a whole bunch of stuff I didn’t look into. Thanks for the heads up!

I didn’t know you could get that granular on analyzing weights.

No I meant the new one I made just now (dino8) that works well.