Hello everyoone! this is my latest work, it was made for be BG Comp, 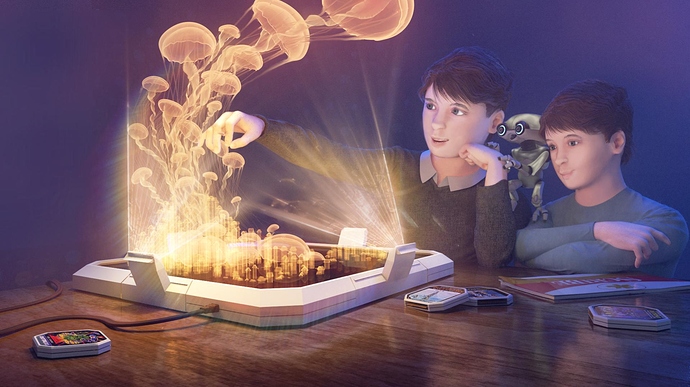 Brilliant execution on the otherwise familiar concept of holography. It looks like something that Disney could’ve created as a prop in the Tomorrowland movie.

I could even see this being something eventually developed as a feature of mobile computing (like for the iPad 30 or the Surface Pro 20). Companies are already starting to work on haptics so why not?

Great concept and visualising this. I like the part where they still use cartridges like you did in the Super Nintendo SNES to show new games or movies on the holographic display.

What Ace says, they’re actually pretty close to something like this, cause I’ve seen the hologram in mid-air already (on a thin wall of water particles) and a 4sides-viewable one, still through glass reflections, though.

So nice capture whats pretty close but not there yet. Well done!

Oh! That’s amazing. Now I’m sure I don’t have a chance against this… I think you have a very good chance to win. good luck!

Thanks for your comments and feedback! I’m really happy you liked it and somewhat related to this, i wanted to create some realistic technology that could exist soon, i’ve seen those prototypes you say they’re awesome!

I’m a finalist in the contest!

The jellyfish look great! Congrats on being a finalist!

The jellyfish look great! Congrats on being a finalist!