I was inspired by the amazing city scenery in The Fifth Element and other similar styled scifi cities to make my own.
In the end I want an extended landing pad to be the center of focus and a nice personal ship landing on it. I’m super happy with the result so far. Texturing will be… an interesting challenge. Any advice or ideas? 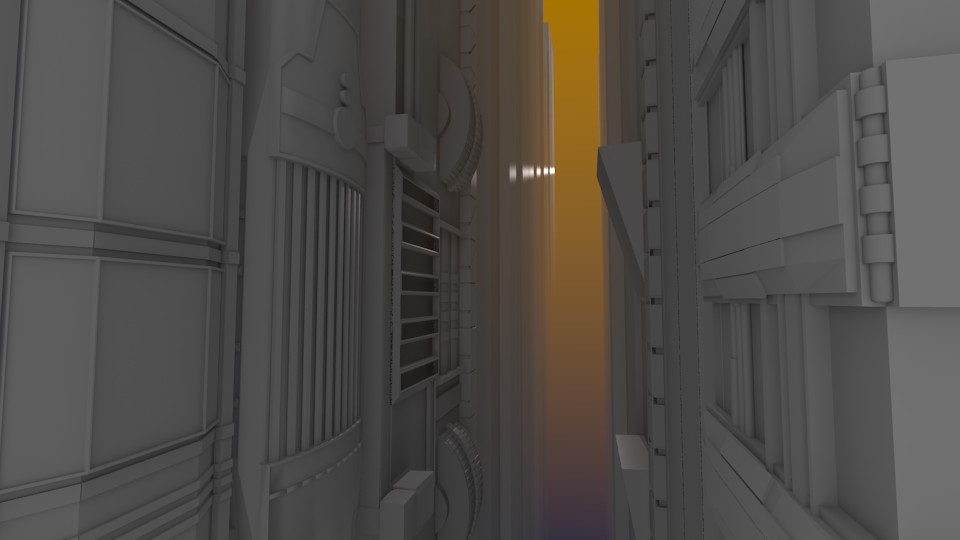 Adding materials and having fun with the easy part. Plan on adding more detailed windows like is seen on the bottom right corner to give it a better sense of scale. Also some glowing tron like lines as decoration on a few buildings. And then finally some grungey dirt/metal textures to the buidlings. 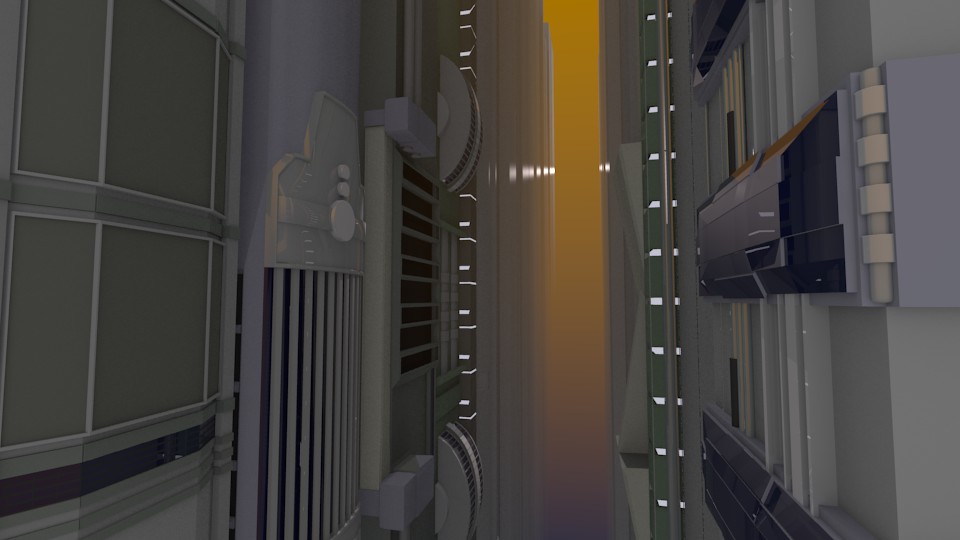 Nothing? Once I get this detailed and textured I’m going to be looking for advice on making it look photorealistic with the sun glare, depth, size etc.

i’m not familiar with the fifth element, but shouldnt a cityscape show more than just 2 buildings?
ur modeling looks great by the way :yes:

Nothing? Once I get this detailed and textured I’m going to be looking for advice on making it look photorealistic with the sun glare, depth, size etc.

Looks good for a start - are you going to create some walkways and such between the buildings? Would add a different aspect from just buildings…It was shown in fifth element (but not much in the driving scenes) - Not everyone will be able to drive a hovercar in the future and gives people a way of getting places…

Looks like just the beginning, and your plans seem interesting! Looking forward to see where it will get. Good luck!

I guess this isn’t truly a city scape, maybe a city scene. This is one alley surrounded by several very tall buildings. Since I add cars and more windows you will understand the scale better. Thanks guys. I’m making some dirt and grunge textures for the buildings. I like the walkway idea, I’ll add some bridges and tubes.

Good start and good modelling also. I looked at some stills from the movie 5th element and the look of these images was completely different. Perhaps you took this movie only as an inspiration for the buildings and how they are standing opposite to each other. That’s, of course, OK.

But I can’t help myself. Whenever I look at your images, I honestly see a sequence of computer cases standing one by one. Perhaps I’m the only one with this point of view. But I see power buttons, drives, slot in drives, ventilation grills and so on. And the materials you added lately and the tron lines you are going to add will intensify this in my eyes. What I dont see are windows, side walks, people, materials which buildings are made of, glass, steel, concrete, bricks and so on. Instead of this I see shiny plastics.

But again, perhaps I’m completely wrong and I’m the only one with this point of view.

EDIT: Can’t believe it, but in fact I wrote “movie 5th avenue”

Of course I meant “5th element”. Just corrected that.

Thank you for your good critique, I can totally see what you’re seeing with the computer boxes and small objects (the details are not very small or… detailed yet.) I’m trying to make metal and glass materials but with Blender Internal I’m limited and also I’m not very experienced. When I add some advertisement and logos to buildings that may help but I’m moving from my larger modeling to smaller stuff like bridges and then flying car lanes etc.

When I add some advertisement and logos to buildings that may help but I’m moving from my larger modeling to smaller stuff like bridges and then flying car lanes etc.

Hi 7over6, yes, that could change the overall impression.

I’m trying to make metal and glass materials but with Blender Internal I’m limited and also I’m not very experienced.

There are some material resources for BI on the web. For a start, perhaps these can be helpful.

And of course there are plenty of texture resources. With a good texture you don’t have to worry much about the underlying material.

Thank you for the links I will check them out. Here’s my latest update. 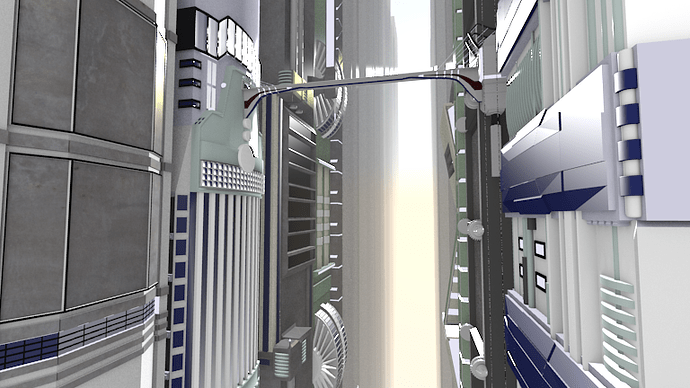 Just used a sun instead of a lamp. I like the highlights but even with raytrace on I can’t get it to produce shadows, everything is so washed out and bright, no dark values yet. Also need to tweak the atmosphere settings cause the sun killed the color gradient I had going. How do yall like my bridge?
tobbew (tobbew) May 9, 2013, 9:08am #12

I think you have scale issues. Could you show us the size of a human at different depth levels?

I think you have perception issues. Lol. 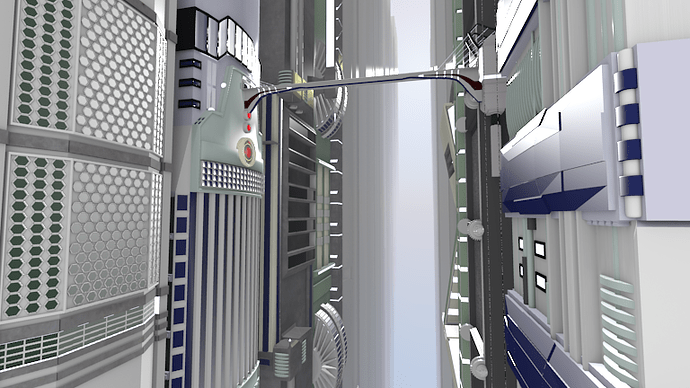 Let’s say the hexagonal windows on the left are large room windows and the bridge could with 5-10 people across it’s width. I’m adding smaller details now to give it the big look. There will be no brick or wood textures here, this is the future!
I’m having serious trouble with the lighting, I can’t get shadows! I turn on raytrace and shadows with sun, and point in various positions in the scene and still can’t get any cast shadows! It all look so flat and bright, no variation. Even played with hemi and area lights. When I turn on shadows for the sun light the highlights that you see here go away, which is strange.
minoribus (minoribus) May 11, 2013, 4:07pm #14

I’m having serious trouble with the lighting, I can’t get shadows! I turn on raytrace and shadows with sun, and point in various positions in the scene and still can’t get any cast shadows!

If your main light is a sun and you have Ray Shadow enabled how big is your sun (Soft Size value)? And how many samples have you set for this. A bigger sun and more samples means less shadow with BI. Small lamps produce sharper shadows.

I’ve added more detailed parts, another bridge, and found that somehow I turned reflection off in the render settings so with the reflection on it helps a lot I think. I also added some concrete texture to some of the closer buildings and want to diversify the material colors more, too much dull gray. 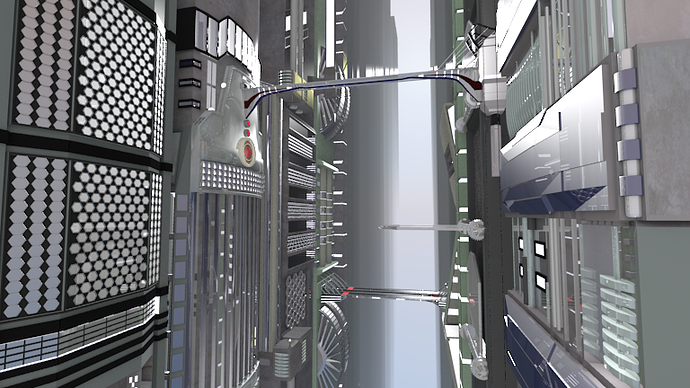 Looks good - the small details help a lot with scale although a couple of human figures would make this much easier to work with (even if they’re not intended for the final version) With or without shadows this is too bright/grey/not contrast-y enough. Could go several ways - brighter, shinier, more reflective; much darker but with more lights and glowing sections; or choose a different key colour than grey.

What is this city and it’s society about? Is it rich or poor? Industrial or luxury? War-torn? Political? Religious? Traditional? A mega-transport hub? Helps to have some kind of theme or idea about the culture, even if it’s very basic - e.g. an industrial city might have factories, cargo transports, pollution etc., a rich and luxurious city would have parks, green ways, open spaces.

I’ll get back to on that, here’s a hires versin shows a lot more detail! Took like 5 hours!
Open it full size. 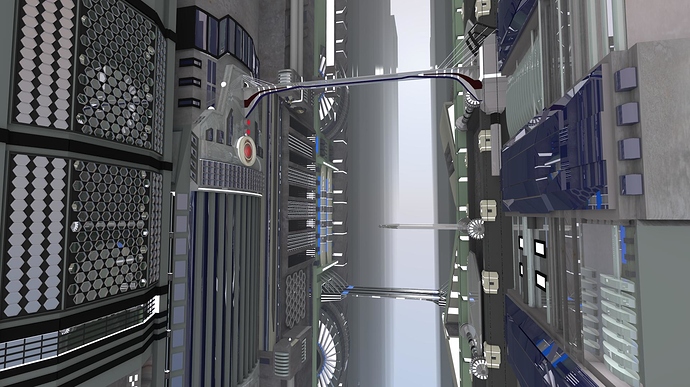 7/6 You have such a great imagination! Really. I have to admit that the first thread images were ho-hum, but this latest is a direction that’s totally exciting and very unlike anything. The bridges are good for scale, the hex windows might not be a perfect solution (more gap for more conduit space, floor separation, outside elevator?) because it just looks like a screen right now, not windows yet; and unexplained geometry is always a welcomed sight in futuristic city canyons!

I agree with scifigene that it’s time to consider a back story. I say that because the building foundation is strong (no pun intended) but I think it’s time to harness the composition - there’s no center of interest/focal point or subject. I’m looking everywhere wondering what the story is. What you decide may completely change your lighting requirements, so spare yourself another FIVE HOURS and render without reflections to test the sturdiness of the modeling alone.

Thanks for your generous complements! I’m going to make it an elevator which has been commercialized in to a huge screen (ads yet to come). The hexagonal windows encompass two floors so I though it would be an interesting change from the boring swuare windows which are so 1900’s!

Yes the setting I have always imagined was that this is the business district where middle class people fly in their automated cars or taxis to megacorporations and do their job, on their ride they are bombarded with ads and fog from slight pollution. I plan on having a bright colors ship landing on the open platform on on the right, it should be the center of focus. I have an original sketch if you would like to see it.

Yes this is what I was getting at. Ads and posters, and especially corporate symbols or names on the buildings, will definitely help. Business zones are all about maximising office floor space and (at least on Earth) window space and also there’s a bit of one-upmanship over who has the coolest or most eye-catching building. Your hexagonal window buildings are fine, these could easily be an office block style. Some other buildings look really cool but probably more industrial than office - but this is a minor point. I like the fact the landing pads can fold up into the walls.