I’m trying to create my first serious animation, and there’s a scene with a long futuristic corridor. I’m still fairly inexperienced with Cycles, and I never realized how hard it is to light up a long corridor. Anyway, this is my first render. 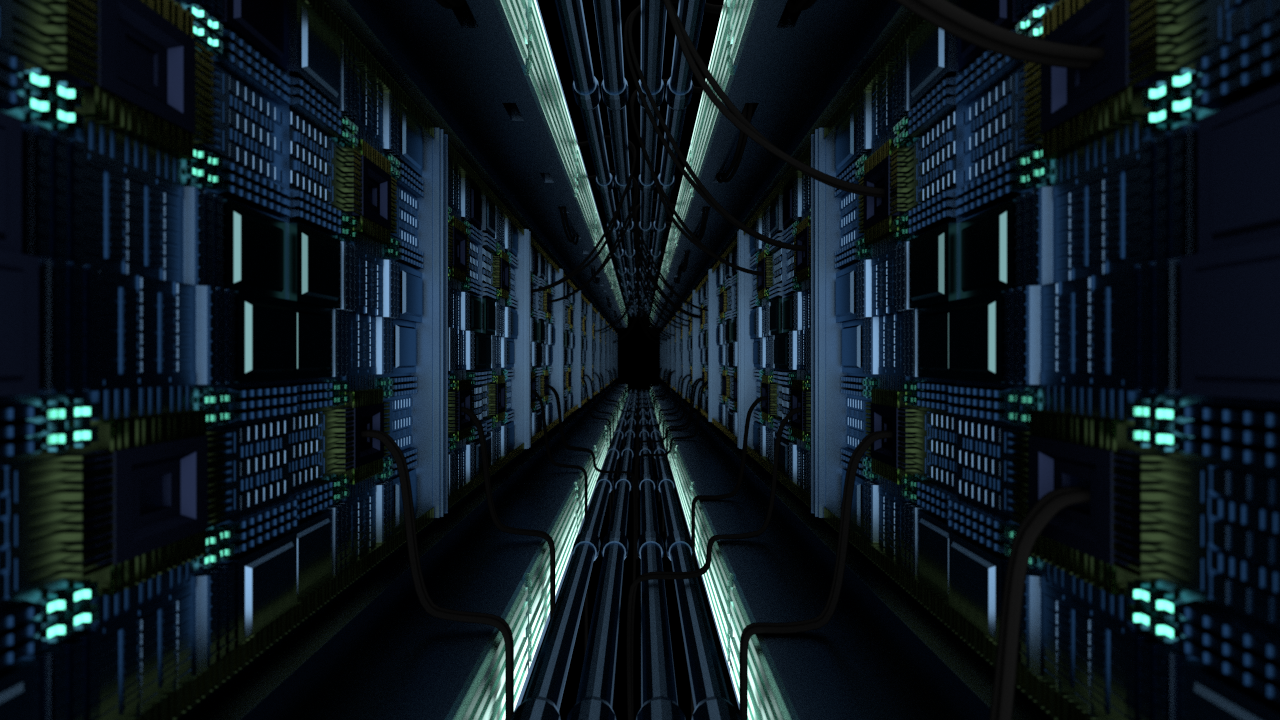 The render time was about 4 seconds per sample due to the huge amount of greebles. But since the greebles aren’t visible in the final render anyway, I decided to remodel the entire scene with less faces. 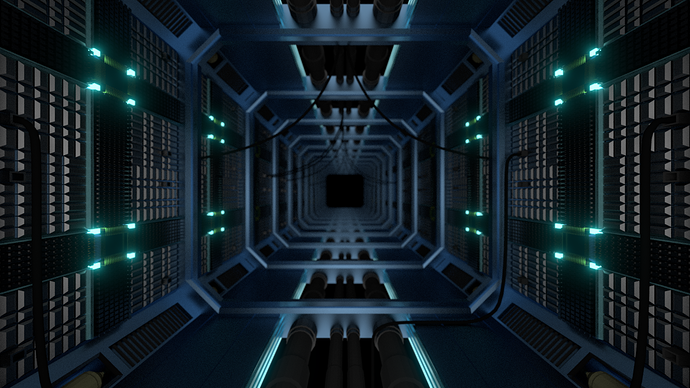 The render time was a bit shorter for the second model. Can someone tell me which render is better, and how I can make improvements? Thanks in advance.

The second render is better IMO, and it looks good. It’s weird to see the total blackness at the end of the tunnel, btw… I’d add something down there.

actually the total blackness is mysterious

although it does seem a little bland

but altogether its a pretty good render!

on the first one the pipes seem kinda thin

Definitely the second render. Reminds me of one of those 90’s cyberpunk video games. That’s a good thing.

Due to the depth of field it looks smaller than a corridor, more like a crawl space or Jefferies Tube. too much DOF tends to change the scale of an image, try moving the focal target to further down the corridor. Also there is nothing in there that gives a sense of scale (although that probably isn’t critical, depends what you are going for). I like the wire/tube in the foreground that breaks up the very formal layout of the corridor but I wouldn’t repeat all the way down. Try either using it once or using wires/tubes in slightly different configurations and see what looks best. Just my opinions, it’s your artwork and it’s looking good so far.

Thanks for the feedback guys, I really appreciate it!

I will experiment with the DoF a little bit (The corridor is supposed to be part of a maze, and although the sense of scale isn’t of utmost importance, I’d prefer it not to look too small). I’ll definitely also give a bit of variation to the hanging wires in the background.

As for the blackness at the end of the corridor I’ll see if I can use the smoke simulator to break it up a bit. As soon as I’ve made some improvements I’ll post another render here.

I personally feel the first one is best. The squished in ratio from the sides makes it feel longer and more ominous. I took the liberty of painting over your render (I hope thats ok…) with some ideas to help you sell depth and space. 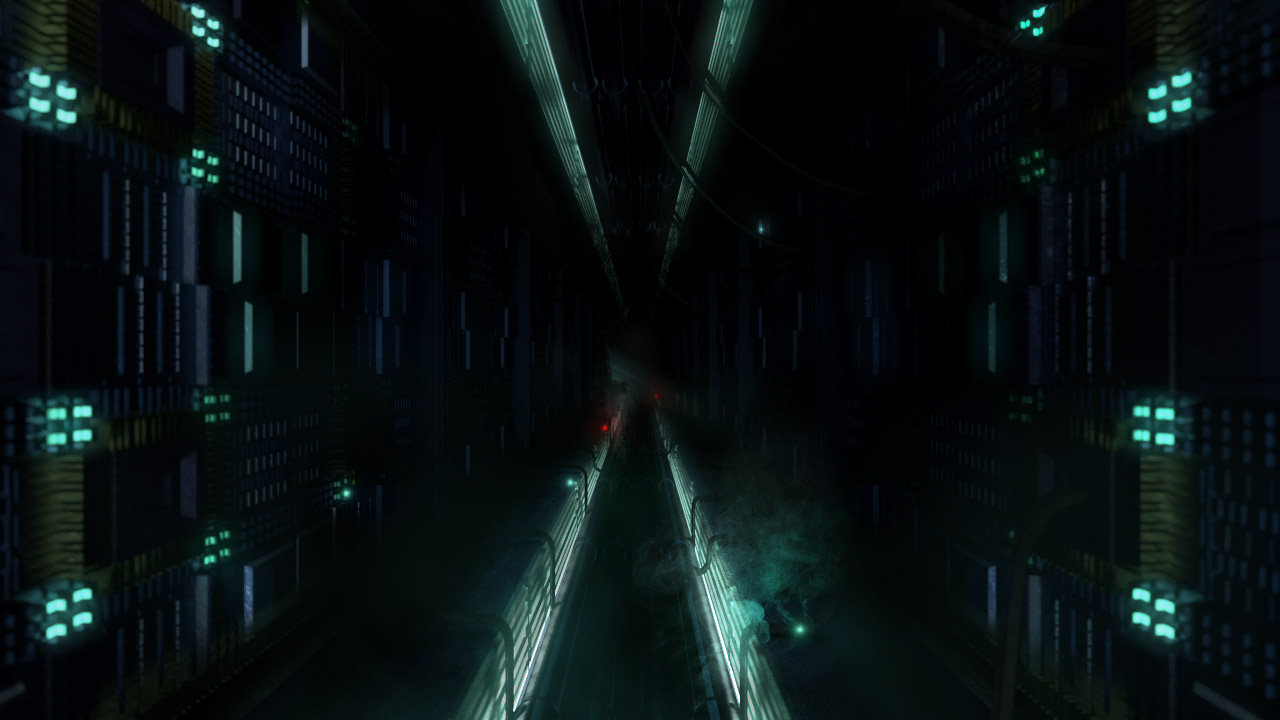 Try adding some texture to the geometry. Right now it feels very flat and matte. Also, to help sell depth, fog or smoke is perfect for helping give the idea of atmospheric perspective. Adding a few random lights here and there never hurts either, and adding some other color (like the red lights) helps give the image a bit more visual interest. I also added a light at the end of the tunnel that kinda helps break it up a bit. Hope that all helps!

Wow, thanks for the edits! I like the smoke rolling on the floor. And yes, I was going for an ominous feel. I still prefer the first render though, so I’ll see if I can do what you did to the second render to the first. But since it’s an animation, I’ll have to figure out how to composite volumetric lighting and smoke in Blender itself, so it’ll be some time before I can post any updates.

That was the first render

My first instinct makes me wonder how much of a pain in the A it would be to have to walk on that thing every day. Obviously you can’t walk on the piping and the outer parts of the corridor has protrusions every few feet or so… people would be tripping over them constantly and probably disconnecting some of those seemingly important wires on a regular basis. It’s just not efficient enough to exist in real life.

Realistically, people wouldn’t be standing or walking on that… realistically, there would be a hovering walkway with hand rails going over those pipes… either a metal grating or thick plexiglass… personally I think either would add a lot to the scene on top of making it more realistic.

@IAmBill
I get what you mean. However, it was my fault to name it as a “corridor”, because I can’t find a better word for it. It is supposed to represent part of a maze in a person’s mind, so I guess we can do without concerns about tripping over wire. :eyebrowlift:

Thanks for the feedback nevertheless!