Hello all. I am new to Blender (about a week or two in) and I have created a basic animation for a company logo. It’s all started well, and the final rendered product (although not brilliant) was a crisp, sharp quicktime movie. However, I must have done something as now when I try to animate the same file, it is fuzzy. Even when just rendering a single frame of the animation, it appears to be doubling over itself or something. I have attached a JPEG to show what I mean (the cross you see is obviously supposed to be sharp). Apologies if this is a noob thing to be asking but I could not find an answer anywhere else. I have checked the Motion Blur function is off when rendering, also this does not happen on other animations I have tried. If anyone is able to answer this question I would be most grateful as i really didn’t fancy starting the animation again. Thanks! 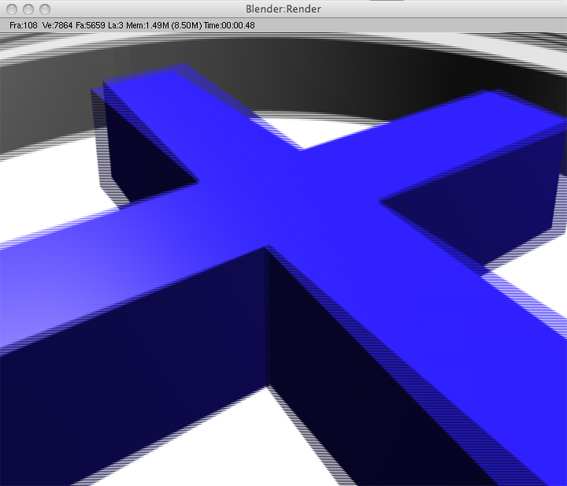 It looks like you accidentally turned on Fields in the render panel. What version of Blender are you using? That would help someone explain to you how to find it.

That’s it!! Thank you so much for you’re amazingly quick response! In future I shall post the version number (I believe I’m using 2.49b). Thank you CD38, a problem solving legend.