Hello everybody.
I’m a modeller/generalist wannabe and I’m making pieces for my portfolio; I need to be able to show something good to potential customers. This is the first piece.

Now, down to biz:
Game character, 9500 tris, 2048 diffuse/spec/normal. Rendered in Cycles with a three point lighting and AO set at 20%
A few issues I’m aware of:
Wrist size is off.
Steel should have a pale blue spec.
Diffuse is maybe a tad too dark. I also chose a dark grey background. Good choice, or would you choose something less dark?
The shield needs more spec/depth. Now it’s too flat.
Breastplate needs some rounding (vertex pulling) just around the arms holes, now you can see some “indent”. 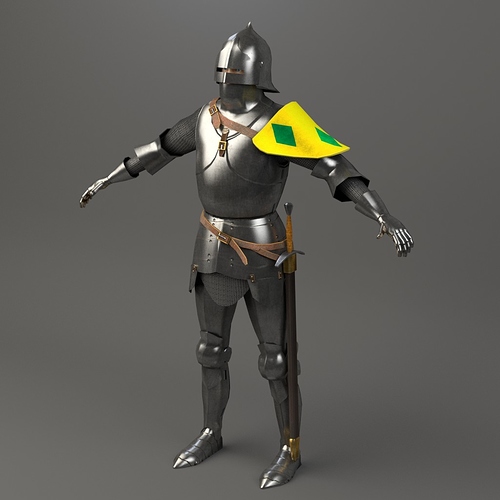 I managed to get a Cycles-capable PC only recently so I’m fighting again against rendering/shading.
I’m particularly interested in getting feedback about my rendering, which is my weakest point. Any feedback is welcome though. Also, I’m posting here because I need feedback and I take critiques with a grain of salt or two: if you see something odd please just tell me. It helps a ton and I don’t get offense!

Looks very nice so far.
The steel material is very nice.
I think the shield not only needs more specular but it´s also very bright. I´d try to tone down the diffuse a bit.

The leather of the belt is cool but the hilt of the sword doesn´t harmonize well with it.
I´d try reducing the yellow in the hilts diffuse texture and perhaps increase the blue an red value a tiny little bit.
Photoshops “Match Color” function also gives very good results.
The colors don´t have to be exactly the same but they should harmonize imo.

The brass tip of the sword hilt is great.

If the vertex count allows it i´d try giving the slit for the eyes in the helmet a tiny bit of geometric variation. At the moment it looks perfectly cut. Just a tiny bit of variation could make it look better.

Hello Lumpegnom.
I’ve edited the diffuse texture a bit but I haven’t been able to fix the shield. I have no idea about the glossiness of the real item. I’ll try to desaturate it.
The hilt of that age swords were covered in metal wire (coupled with soft leather/wool gloves: anti-skid system). My try was not succesfull, I guess

I could revert to something less historically correct but more in line with the general color.
This kind of helm slit was simply opened cutting the metal with hammer and chisel. The reference I have shows a much wider slit than usual, anyway: I have no real max vertex/poly count. I hoped not to edit the geometry but I’m open to ideas and suggestions, so I’ll keep it in mind. Some experimentation can’t hurt.
In short thanks a bunch for your feedback!

he looks a bit fat because of how his armour sticks out in the chest area.
the armour goes directly from the chest bit to the armour around the chin in 1 piece, which would make it impossible to take off no?
scratch up the shield a bit
pretty cool though, but maybe the “crotch chain” (i cant think of a better term…) ends a bit smoothly

Hello f3l1x.
To be honest I simply followed a reference, those chainmail ends come in all colors! Breastplates were usually divided in 3/5 pieces. There are hinges on the sides, but the seam is not very visible in my model. Sometimes it’s HARD to find back shots of armours, depending on the model. I just discovered that sometimes the neck piece is a half shell: you only get the front half, the back of the neck was bare and protected by the helm extension.
In the original texture I actually have a wood layer for the shield, I was going to scratch it before deciding to go for a pristine look. Maybe some scratching could make the model more “gamey”.
Thanks, for your feedback, this is appreciated