Game Development - from Noob to Guru

this thread does not want to be taken serious.
But it want you to think about yourself and your expectations.

All numbers are wild guesses :evilgrin:.

You see there is no 100% skill class. That is to leave space to the top. But feel free to tell everybody you have the 100%.

The typical game developer is starting with no clue, quickly increasing the first few skills and finally discovering the hidden secrets of game developing.
BTW. I’m writing game developing, not programming or modelling ;).

How to increase the skills? 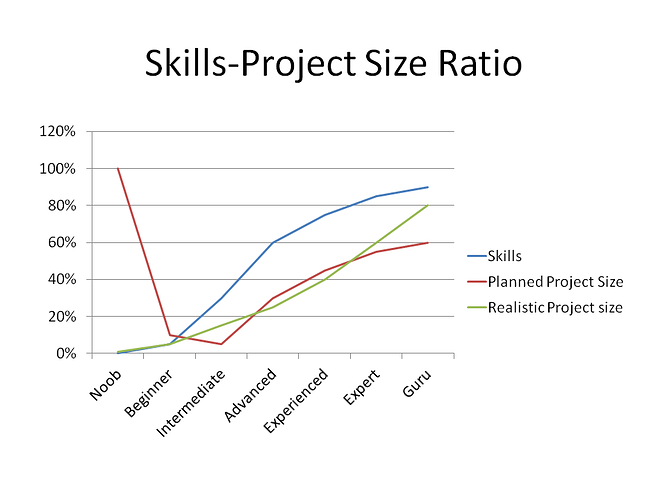 Why are there so less experts and gurus?
It takes a looooong time to come to this level. A lot of game developers give up at a certain level (mostly blaming the tools). Other change their live and loose interest in game creation. And some become Experts and Gurus but move to other communities. 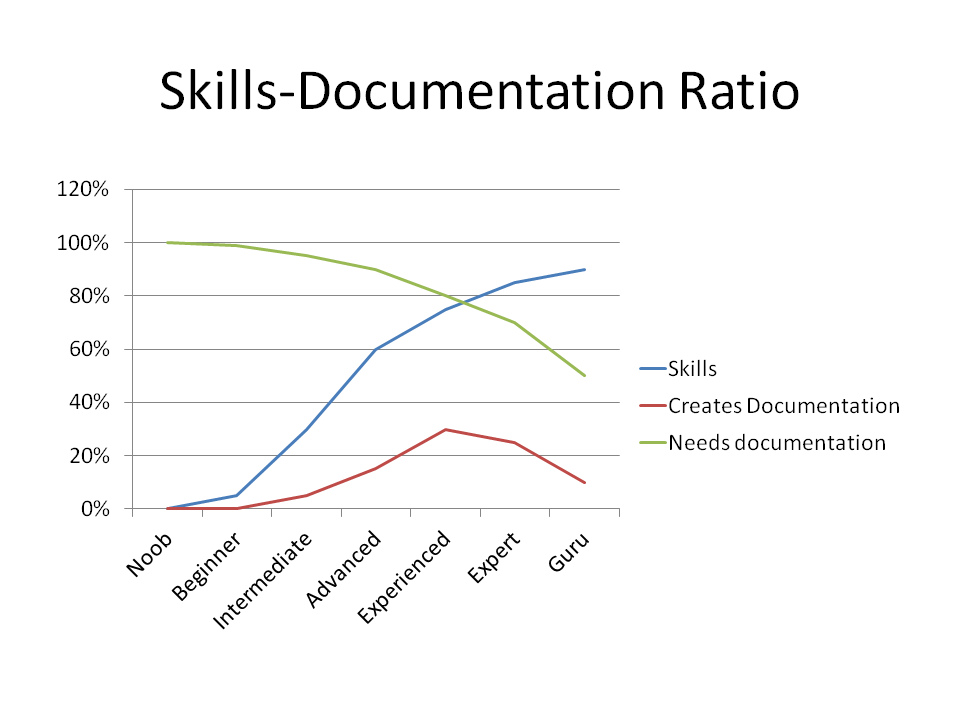 That are interesting charts. When looking at it keep an eye on the other one.
The project sizes increased with the skill level. Even we think we have a huge brain we can’t keep a full sized project in head (not if you need to remember what your girlfriend wishes for her birthday). Therefore it is recommended to write down your ideas = documentation.

For mysterious reasons nobody want to do that. I do not want to explain it because of the posts max character limit. It is 1000 Characters not 1000 pages. But to give this universe of reasons not to document anything a name … it is called lazyness. And I’m the emperor of it :evilgrin:.

Green has a direct relationship to the project size. Finally even a Pong game should have a document that tells the user, what he should do, can do, who created it and how much it costs. Yes writing a user’s manual is part of the game development process.

Lets look at the graphs.

I hope you enjoyed reading this. Today I’m a bit ill. That’s why I have some silly? thoughts today.

That is sooo cool!
I really like your presentations!
Knowing where one stands, compared to a logical reasoning such as yours can help one re-evaluate one’s goals!
In my case, it’s a bit hard to place in the graphs.
When I started using Blender, 3 years ago, my project was big! Now it’s bigger! I made hundreds of tests and tried various things, all this helped me learn a lot. So I might say I got to the advanced level… Now, I’m too stubborn to give up on my “impossible” project, so I try many different ways to make it work, after it failed to comply!
Did I learn my lesson?.. naaah!

Very interesting, and I agree with your findings in the charts, though I’d say the skill line in the first chart would be closer to the project line, and sometimes below - it is often wise to tackle slightly more than you can handle, and rise to the challenge, at least in parts.

Great post Monster, I think I am advanced,I tend to change game projects(I did this two times) now I think I won’t do that again, I hope so.
I have my Game,Idea, and I will go till end.
About blaming the tools, when I talk about Blender GE, yes there is to blame a lot but while is free-open source…
I stopped making two games because of the performance and not enough features.
Tho,now I work on two games and both of them are going great, but a big problem relates to GE performance and not everybody will be able to play the game because of that.
I like good graphics and that eats frames, all my games/maps/project etc features good graphics,and I won’t be able to leave that( good graphics), I would rather change the engine then making ugly games.
As I said there is to blame the tools, many things are missing and it’s harder for the dev to make a game.

Anyway, great Post Monster, I hope I can
finish a decent game featuring nice gameplay and good graphics on BGE.

I rate myself as ‘Beginner to Intermediate’ as I haven’t released any proper games yet but I feel I know how to make a small game. As of writing this I could release Grid, but I may never release it, I want my first ‘Finished Game’ to be fun and look better than ‘Beginner’ level. Great thread Monster, where exactly do you rate yourself?

I guess I would fall under the intermediate category. XD This post inspired me to actually make a simple game.

sooo true what you said about the noob :yes:

) i thought up this incredible large project which was…well…huge.

thankfully i realized and now im simply working on a “step-by-step” project, which is helping me learn more and more about the bge

The graphs are a perfect reflection of game development reality (in my opinion).

For those too lazy to read the whole post: Just take a few seconds to look at the graphs.

And watch this trailer:

A trailer for “Indie Game”, which is basically a documentary about indie game development.

Note the part where they refer to development time, and use the word years - for 2D games.

… Good luck with your MMORPG!

Thanks for saying this. I just hope people listen.

… Now, what are the chances of that?

Yep, indeed a very interesting read! But this can be altered to a lot different situations in life! The more you learn, the more you see what you can’t do yet! And for many noobs a lot things just seem to be very easy ^^

Hi, as someone that only found blender and the idea of making games 4 - 5 weeks ago, i can only relate to the noob - beginner part of your graphs, and i must say they are spot on. I was guilty of thinking “I can make the default cube bigger and smaller, lets write am mmo”, well as you may have guessed my plans have changed. According to your first graph I am now a beginner working on a much smaller game, that i am confident of finishing and am learning loads from.

The section on documentation had me crying with laughter, you are right again, the limits of my current documentation is a “ToDo” list, and that fact alone has caused more wasted evenings than anything else. Although i look on no evening wasted if i learn something.

This post is great, informative, funny and a glimpse of the good and bad time to come ahead.

And watch this trailer:

I rate myself as Experienced. Luckily I published two finished game .

Oh, really? I never knew that >_< I always thought you were just a great teacher/helper to the community, I’ll be sure to check out your games.

Do not take it to serious. It is not necessary to publish a game. But if you do you realize that game development does not stop with that. It forces you to think about presentation (marketing), clean-up, support! etc. .
And
I think it is better to publish some “weak” games rather than to fail the presentation of the game of your dreams .
Assuming you’re replying to me, it makes me want to release Grid, and now I probably will! Thanks for the advice, and that thread link

BTW I see me as an intermediate publisher .

That’s fine, but from now on you’re not Monster, you’re Modest.

Too true. I agree with all of it, even if you tell me not to take it seriously.

Monster, you are not “experienced,” not by a long shot. If anyone on this forum can claim to be either expert or guru, it it most certianly you.

I must say though that I am in a similar situation as torkusama, where I haven’t really had any successful games taken to completion yet (except tech demos), but somehow or other the game that I started a good 2 years ago (and worked on/off on) is still running, and progressing nicely.
I would consider myself an intermediate game creator (so long as you don’t throw character animation at me, then I am a noob)

By the way
For some odd reason, the ‘Finished Games’ forum will suddenly get a many many hits.

Also the ‘Your Guru’ by first time posters will bloat the BGE forums all over… Just out of blue!

Yeah,everybody has it’s own weakness,my weakness it’s music, and a bit scripting.
Anyway, it is not a problem,I already have a very good scripter in team (agoose77),and a really talented composer (YouTube username CVAL09).

This is a very interesting way of showing this subject to the users. I wish I had that idea when I first wrote a sticky on blender brazil forum about that subject.

Although my aim is to make a racing game, my main way of learning Blender has always been to break down each problem into one demo blend and make multiple approaches to see how it can be done. Its been slow, but I have learned so much.