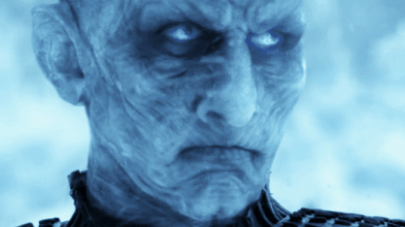 Let that sink in. 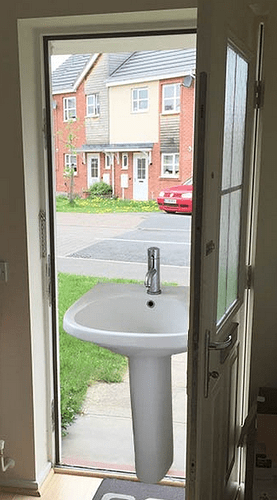 Obviously chances for that to happen are zero to none, but what do you think if that would happen?

I’m enjoying season 8, but there are a few things that are kind of bugging me, like:

Why is it only 6 episodes? I know they are somewhat longer, but they should have kept the 8-10 episode format.

Some of the character deaths haven’t been… shall we say dramatic enough. In previous seasons, characters’ deaths have been shocking and worthwhile, but this season, it seems kind of meh.

I guess I just want the payoffs to all the storylines to be over the top… like what got everyone hooked on the series to begin with. Don’t go out with a wimper… go out with a bang.

Not even reading the posts. My plan is to binge it when it finishes. I’ve avoided all spoilers to date, and the last thing I expect is to find spoilers here.

Sorry, I won’t see replies to this until I watch it.

Honestly I’m still salty that they decided to go with 1 book per season. Wont even bother with season 8 at all.

“If you think this has a happy ending, you haven’t been paying attention.”
— Ramsay Bolton

I actually wanted to not have the happy ending, but episode 2 ruined everything. Look at that: 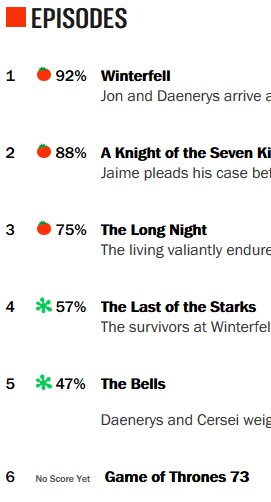 I don’t mind plot twists, sudden character deaths - that’s Game of Thrones after all.
But this season is a disaster.

I mean, no spoilers on this video, but this sums up everything in 30 seconds:

God I love this quote! I love watching the people who wanted a “Princess Bride” ending squirm in their little tights. Lol

Also love seeing a petition with 200K signatures… that’s so cute! The 100 million other viewers have given it a standing ovation.

Also love seeing a petition with 200K signatures… that’s so cute! The 100 million other viewers have given it a standing ovation.

Oh for sure with that ratings on Rotten Tomatoes and IMDB.

Why would I ever read reviews on something so subjective as art? I’ve never once read or written a movie or TV show review.

If you watch the Director’s cut of Blade Runner, in the bonus material, you’ll hear Ridley Scott talk about how poorly the movie was rated by the critics, and it wasn’t until after the test screenings that the studio forced him to add the Harrison Ford narrations throughout the movie to help explain what was going on. Scott was against it and that’s why in the Director’s cut there’s no narration… Ridley’s original vision for the film. And it wasn’t until the late 90’s that the film started to garner the acclaim as being one of the greatest Sci-fi films ever made.

With that said, even the stellar reviews it receives today mean zero to me. That film alone, from the very first time I viewed it, was the reason I wanted to become a filmmaker. No bad review could ever take that away from me.

Movies, art, music critics are one of the silliest/surreal occupations out there.

The only reviews I have ever cared about are the reviews from my peers about my work.

Maybe that silences all those who try to misinterpret and bend actor quotes to their liking.
I’m so fed up with those social media crowds, those waves of feedback-looped mindless excitement “liked” and “shared” and retold just to be part of the flock. Everyone is entitled to their own opinion, but may I suggest that instead of making claims to others in a chorus, make your own movies if you can’t appreciate and enjoy what others do.

And btw, GRRM created that need to rush things in the end by himself. If you blame the script writers, you’re also blaming him, for building up tension 5 huge installments long forcing his characters into loops, deviations and whatever subplots while still introducing new characters even in book 5. To be honest, while reading the books I wondered to what purpose GRRM introduced the whole White Walker theme in the first place. The whole story obviously is about “people squabbling amongst themselves” in an almost fetish-like infinite loop after all, with some looming threat in the North mentioned now and then but never really elaborated so far, no clear direction visible yet, five of seven planned books written already.

The script writers are guilty of some laziness, true, but all in all IMO they repaired a lot of the mess GRRM has written himself into.

I guess everyone was expecting something else, but isn’t that what made the series so great in the first place? Those unexpected moments that caught everyone by surprise. My only regret is that Arya didn’t get to finish her “list”.

Killing the protagonist is the worst thing to do in a story based on user satisfaction perspective.

But let’s get back to basic a bit here:

The real value of a show is that people care about the character interactions along a story timeline, the value of a movie is a good story plot (following the common patterns), the value of a book is more of a world building and world diving, the value of a video game is mostly the game play itself, the value of a reality show are the meaningless events as in daily life.

So the point here is that a show survives only by it’s characters. Is not the same as a theater play as you would watch Shakespeare for example where everyone dies. Because Shakespeare is very grounded to reality, so either we like it or not some things are unavoidable. But here we talk about a a fantasy show with flying dragons here, what did you expect? To consider killing a protagonist would make the show a classic as in “Titanic” or “Romeo and Juliet” or “Homer’s Odyssey”, huge fail!

The point is that people liked the characters and the story that took place in that fantasy world. Everything else was pointless.

Wow, putting “Titanic” in one line with “Romeo and Juliet” and the “Odyssey”, that’s daring.

Killing the protagonist is the worst thing to do in a story based on user satisfaction perspective.

This is Game of f*ckin Thrones we are talking about here. Ever watched the show, or even read the books? It had some success I believe, despite killing off protagonists on a regular basis.

D & D rushed the ending because reasons. They could have easily made another season (or 2), because HBO was very generous but they insisted that they finish the show…now they reap what they sowed.

I can’t wait for their Star Wars trilogy and watch it fail spectacularly (like the current one) if it happens at all, which is doubtful. Rian Johnson trilogy isn’t happening either.
Oh how the mighty have fallen.

Unfortunately I did not watched the show on a regular basis, but I know more or less the tactics of producers and writers. About with little attention to books or story or deepening characters, most effort goes into crunching air-time to fill episodes and building anticipation for the next season.

However at this time producers followed the same pattern, but missed the part of not getting a next season, so wrapped things up quickly and called it a day.

Based on a business perspective however is very clever to sell at your highest and avoid future damages.

Based on a business perspective however is very clever to sell at your highest and avoid future damages.

Yes in theory as an rule, but that’s not what they did here. Just look at the ratings. They dropped from the highest to the lowest. People tend to forget the in-between, but they do remember how things end. This killed all the replay-ability and their profit from Blue-Rays, not to mention their reputation. GOT could have been the gold standard for TV for the next decades, but they botched the landing and now they are a cautionary tale of how not to do things.

Then you did not listen properly. Its the opposite. “Your product is shit, give us what your promised.” Its a classic customer complaint.

Game of Thrones is inspired by history. Particularly, Wars of the Roses. Shakespeare’s Henry VI plays also depict that era in history.

Anyway, I think most people were upset by the contrived writing of the final season, moreso than any particular character dying. Personally, I wasn’t nearly as invested in the show as the books so didn’t really care. I would still like to see GRRM finish the books, though.

Give us what, in our wishful thinking, you promised.