I come to you with a project started several months ago. It still needs some details here and there, but mostly I have to work on the car materials. And I’m stuck. I know how to do it, but I don’t know what to do. Do I just make it dirty, or do I make it a completely abandoned car, rusted, destroyed and all ?

I’ll take any advice, observations and comments that you’ll have.

Thanks in advance, cheers 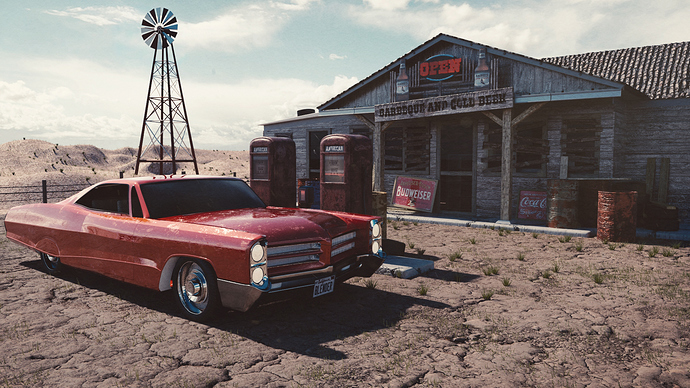 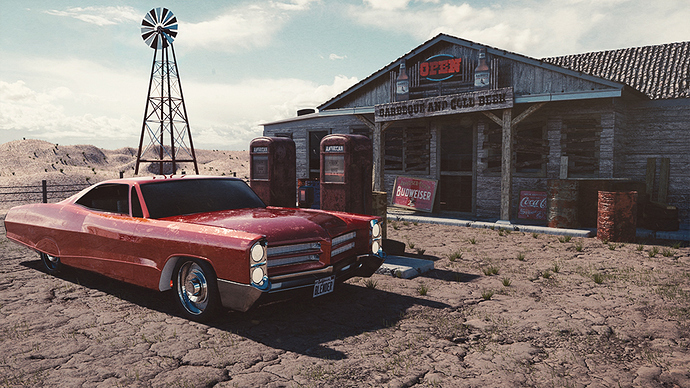 I love the scene you set up so far, really amazing work! You did a great job on making the ground look harsh and dry. Same with the rust on the barrels, and the worn out look on the market. I did a google search on cars with rust, and they usually don’t give out much reflections, and I can see some reflections coming off the car. 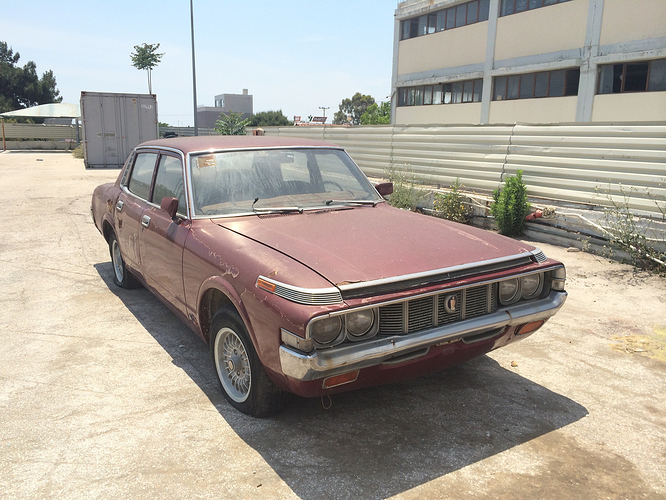 This is an image I found off of flickr. I know it’s probably not the same type of car as the one in your scene, but it’s close. So as you can see, looking at this car, as the sun shines off of it, you begin to see more of the rusted metal. I don’t know what node group you have set up in your scene, but probably consider lowering the glossy amount, and maybe adding a bump node to the texture of the car.

For the hills in the background, maybe add a depth of the field so that they aren’t as sharp or visible to the viewer.

This is optional, but maybe add some buzzards in the sky? Just to give it more of that abandoned desert look.

I hope my thoughts are adequate and not harsh. They’re just opinions, so it’s totally up to you.

i love it! though i would make the car a lot less shiny and a lot more covered in dust, add some scratches and make it a bit dented. the ground, it looks like too much uniform in color, but could be just my point of view! keep on!

You could try and use the “normal” output of the “texture coordinate” node and plug it into a “seperate RGB” node. You can then use the G (not sure if its G) value to define where your car paint is more rough and bleached out by the sun.

Can’t see the inside of the car at all, need to fix that. Why are the headlights on? The windmill looks oddly perfect and more than a little artificial, like it was not modeled to the same high level of detail as the car & the station. Its alternating-color blades are questionable.

The shadows of the plants in the far BG look way too long for their distance from the camera, is it false perspective? If so, that gives it away too much, many may not know why it looks odd, just that it does.

All the grass that is not in clumps is leaning at about the exact same angle, another CGI giveaway, try to randomize the growth pattern. Same for the height, just a little too uniform.

OK, nits have been picked. All in all a strong effort, worth making even stronger.