Does anyone have an idea how I might be able to generate a lot of random poses of a human armature in blender (for example an imported makehuman armature)?

The main issue here is self intersection otherwise I could write a python script with the angles in the correct ranges and not worry.

Thanks for the suggestion. I am already using those mocaps.
I specifically want to overcome the need for mocap data and instead be able to generate
poses which are entirely random but dont go against the natural limits of the body and dont self intersect.

Are you talking about randomness as in crowded scene? There are different sets of random poses you know. Here are some examples; crowded street, crowded beach, crowded stadium, and so on. None of them are totally random. Group of people are doing given activity at random poses. Random appearance has lot to do with random size of people, random color clothing, and random faces as well. Every pose is doing some thing. It is not just random gesture. How are you going to put a number to that and crunch it out?

Im talking about randomness in pose of a human armature. The other variations such as clothing, size, fatness etc are somewhat easier to deal with. Im not going for high realism either.

A good sub example is a human hand. Ive already written a simple script to simulate random variations of a hand and it does so by
generating random angles within physically feasible ranges for each joint in a hand armature.
The only issue with this method is that every now and then the thumb intersects the index finger. However this is not a big issue because it happens infrequently and the intersection is almost never particularly severe.

Doing the same thing for the body is different because the chances of self intersection are much higher.
The only solution Ive come up with (not implemented) is to generate random angles within feasible ranges for all joints in a human
armature and then run a script that can detect whether there is a severe intersection by checking intersection of bounding boxes for all limbs.

Do you think there is a better way?

My current planned solution is to do the following:

I’m thinking about to do the same with the movements of the head. Infact I would like to create a set of poses for moving the head and then i want to randomize them. you can read the full story here :

I'm looking for some new ideas to make a full talking character Tutorials, Tips and Tricks

did u realize the script,already ?

HAs there been any progress figuring i\out how to make randomized poses?

I feel that if you find a way to randomise poses and remove all the poses where the model cuts through its self the results would still be … broken looking. Arms at weird angles, legs not touching the ground, etc.

Think about it in venn diagrams:

All poses without clipping

All poses that a human being could achieve

All poses that a human being could achieve under gravity

All poses that a human being would actually get into

All poses you might actually want in your scene

I am coming at this from the perspective of an artist who wants to have a randomized model to practice figure drawing drills, so “all poses that a human can achieve” is as deep as I am aiming for at the moment. 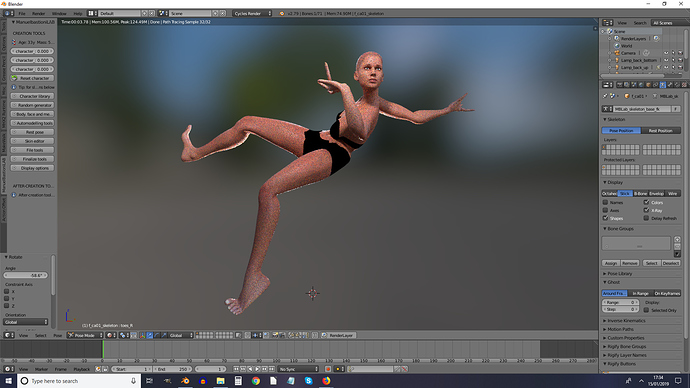 How did you randomize the mb-lab armature?

pressing R R twice on each bone and then rolling the mouse around. I didn’t use IK.