When I join all of my objects consisting of a snowman I lose geometry (gets deformed) and I lose my subdivision modifier.

Make sure the object that has the subdivision modifier is the last one selected - the other objects will join it and inherit it’s modifiers.

Ok thank I also have one other problem. I created a top hot for the snowman and when I go to join the mesh it gets deformed.

Objects that are being joined to objects using subdivision have to be set up suitably to have that modifier work. When I’m working with multiple objects I plan to join later, I try to have the same modifiers on all of them prior to joining.

I don’t know what your model is like, but if it’s deforming like the yellow object when it gains a Subdivision modifier it needs extra supporting edge loops. Top row is object not set up to get subdivision properly. Bottom row is same object with a few edge loops added getting the same modifier. 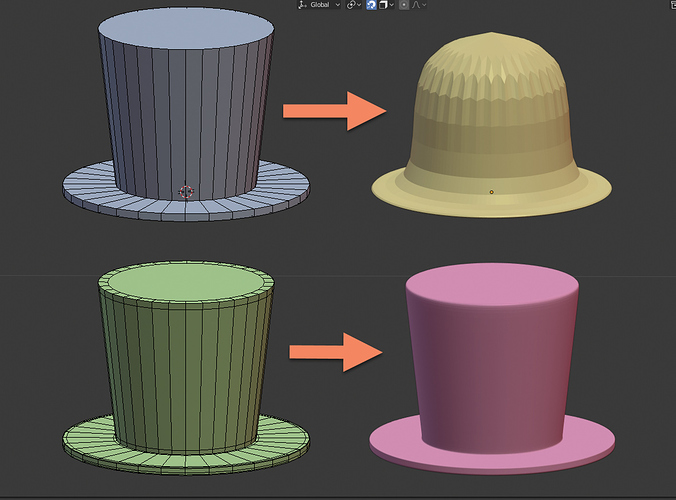 thank you that exactly answered my question. I am also trying to learn how to rig and animate characters and it is a nightmare for me. Maybe tomorrow you can help me with some more questions I have. My name is vince and apricate your help. I spent hours online watching tutorial and they were no help. The only thing that has kept me from giving up is my passion to be creative. Thank You