Has anyone made a geometry node set-up that reproduces the effect of the Decimate modifier ?
And if so is there a major performance difference ?

Probably not the answer you were looking for, but you can apply a decimate modifier on the original object you are instancing and the changes will reflect back onto them.

Not quite the same: 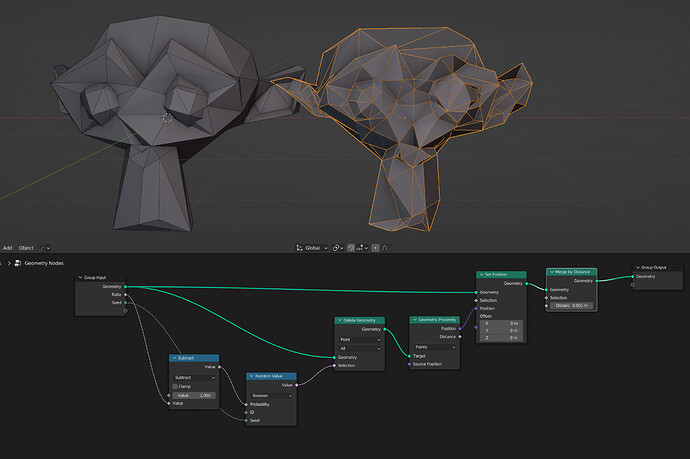 (One would have to look into the code of the decimate operation for an accurate replication)
poor_mans_decimate.blend (123.3 KB)

@LordoftheFleas Thanks! We’re getting somewhere. I think the main differences that make the Decimate modifier better so far are that :

All these factors help drastically to preserve the shape of the object better.

I’m sure we can improve this node setup, perhaps using the edge angle node for the low curvature part?

@RPaladin My situation is a little more complex so I’d like to have it as a node group.

Thanks. I don’t know C though so right now I’ll either try to improve the node setup by comparing visually and fiddling with nodes or just keep using the modifier.