Then maybe you can use the hit position to displace the petal vertices? But then I would agree that its too much trouble

That’s the same method I used. Did you use mine, figure it out on your own, or get it some place else?

Also, REALLY great work. Looks much more lifelike than mine.You squished outward side to side, whereas I sucked in where they push against each other, not preserving volume.

Just write the node group so that it’s impossible for them to overlap.

I.E. When the flower isn’t budding, the curve at the top would be zero, and make it curve only half the distance to the next petal.

“just make it work !” I didn’t think of that, of course

Given the way I’ve setup the thing it’s not that easy, but of course it’s possible !
I’ll keep that in mind ! It’s a great solution , but it would be simpler if I think about this one from the start. I’m trying to stick to a production schedule to see how far I can go with that constraint, so I’ll see if the “production” allow for such refactor of the tree !
Thanks !

I like your version better, but here’s what mine looks like now:
I’m working on the elbows/ribs/armpits next, then will make a version that will work with any mesh.

I’ve come up with a geo-nodes group to fix self-intersection of joints. In real time, it adjusts the mesh based on the armature. Still a work in progress. I’m doing IK first, since my own procedurally generated human uses IK. I’ve got the knees and hips done, next are arm pits/ribs and the inner elbows. Then I’ll tie in FK, add some controls, and throw the whole thing on GumTree. It should work with any and all humanoid meshes, with a bit of set up. [Early Results 120] [Early Results 12…

I have been using that technique since the start. I didn’t get time to completely watch your video so correct me if I am wrong, I think you calculate the angle between joints? My version is slightly different in the sense it works with any mesh.

I tried ‘just’ testing to see for self intersection and modifying that part of the mesh… but it always turned out… horrific. That’s why I went to calculating the angles.

I am using raycast to detect intersecting meshes

This is the best and most accurate technique, however unfortunately is the most computation intensive.

Typically in programming once you go into the trouble of calculating an intense part, then you cache it so is reusable for the next time, unless something changes and becomes “dirty”, so you calculate it again, etc.

Nice, as I see in this video is quite slow.

Perhaps it depends on the polycount of the model.

The dude could be running on a toaster for all we know.

Or that could be any number of things unrelated to Geo-nodes.
But all mine are optimized to raytrace only exactly what is needed and before any subdivisions are done. Come to think of it, the subdiv-surf is my most time intensive node of all. And even with that, my 5,500 nodes computes in less than 150ms, creating an entire human with geo nodes, rigging it, and adding in joint fix.

Of course if you want performance (eg for games) you should go for shape keys. What I am aiming for really is getting quick believable deformations for animations and still images. Because I know there are many who hate corrective shapekeys with a burning passion. Who knows, maybe I will figure out a way to implement baking for the deformations

Not really, the timing of the raycast is added to the node you are connecting it to. 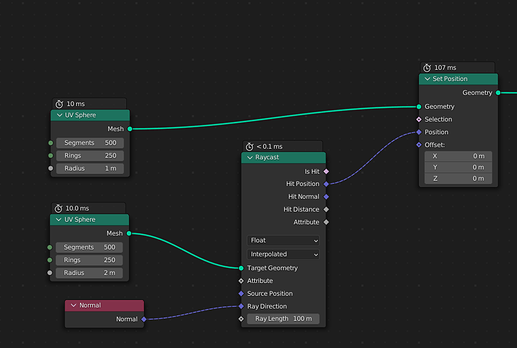 I know many of you would like to get some performance numbers.

I am on a laptop with Windows, NVIDIA GeForce GTX 1650, AMD Ryzen 5 4600H, 8 GB RAM. I have some optimisations in mind which might improve the performance. Again, you don’t have to enable the modifier while editing. You can set it render only.

I finally put it up on Gumroad. For some reason I get so needlessly stressed before releasing anything 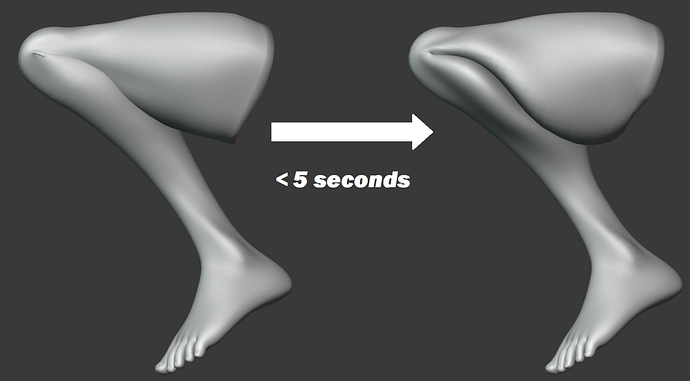 Squish is currently in the beta version. Please use with Blender 3.2 What if you could correct ugly deformations in your rigs in just three clicks? Seriously, no Shapekeys, no drivers, no hours upon hours of weight painting, no hair pulling. Just add... 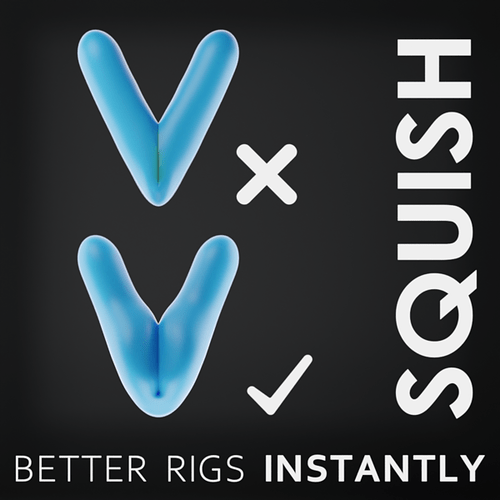 Actually I should have mentioned, they are quad spheres.

Edit: seems like Imgur auto flagged my video, how is that even possible?

seems like Imgur auto flagged my video, how is that even possible?

There are a lot of neural networks that detect and flag nudity automatically, here’s one: https://praneethbedapudi.medium.com/nudenet-an-ensemble-of-neural-nets-for-nudity-detection-and-censoring-c8fcefa6cc92
They didn’t use to have auto-flagging on Imgur, but once these tools started becoming more widely available, they implemented one. Discord does something similar now, as does iMessage and I think WhatsApp as well

Perhaps the deformations look too real