3 posts were split to a new topic: Animating an object that has a scatter

Hello everyone. I have not touched geometry nodes for so many months and I am somewhat outdated on the development progress so far. So I have a couple of questions. Apologies if they are quite obvious

DIrections around these topics would be really helpful.
Cheers.

1/ I don’t think so, many nodes are in a WIP stage in the tracker but only a few gets finished and end up in blender, it’s a slow process.

2/ Same as 1. In the meantime, there is a cool tutorial from entagma that deals with point inside mesh : https://entagma.com/pack-points-inside-objects-with-geometry-nodes/
Maybe not what you’re looking for, but worth watch it …

3/ For now, core developers focus on replacing current hair grooming tools to a new system that would allow to modify hairs with nodes. And a dedicated Hair sculpt tool that allow manual editing, like we had before. This bring a lot of optimization with curves and GN. Basically it’s a lot of broad changes that will also bring benefits to other uses of GN than hairs.
Most of other modeling nodes are still developed but mainly by the community. They’ll come to blender at a slower peace but interesting things are worked on nonetheless.

The basic idea is still the same, core devs (Hans and Jacques) will work on big architectural changes : such as broad optimizations, loops , physics … And individual nodes like porting a modifier or adding new small functionalities are left mainly to the community.
So big changes comes regularly and small needed feature comes at a slower peace. But maybe at some point a general effort could be done so most of the WIP work from the community gets finished.

Ah, I see. thanks for the clarification.
Good things come to those who wait I guess

Thanks for sharing the Entagma tutriial as well. will check it out right away.

At this point, I’m really considering joining the community in trying to add these small needed features. Of cause I have no idea what I’m talking about haha. I’m not a professional programmer by any means and I only have some experience with doing cool stuff and optimizations with python in blender. This is definitely not the place to ask for help learning how to modify and create custom blender builds. I’m just gonna spend a couple of weeks figuring out if I can learn and then maybe help with geometry nodes a bit.

Here’s to the frustration that will follow naturally. Sorry for the rant

3 posts were split to a new topic: Feeding a noise texture to a transform node

A post was split to a new topic: How can I see the distance between an empty and the origin of the object that has the geometry node?

Super cool !
At some point I tried to look into C, C++ but it was a bit too much for me, it’s not as easy as python, but with time and motivation everything can be learned !
I think the first step is to be able to compile blender : https://wiki.blender.org/wiki/Building_Blender
If I record correctly devs have a list of small issue that are easier to look into for someone starting. You may pick one. Or just play with the code to see how it’s organized.

2 posts were split to a new topic: Count the number of objects from a Collection Info Node?

Thanks again. I’ll definitely check those out.
One of the first sets of languages I learned was C /C++ albeit at an extremely basic level. I’m hoping that knowledge pays off now.

3 posts were split to a new topic: Convert the instance in a geo node into instanced objects?

This would be incredibly useful in cases when you need to extrude two adjacent faces and merge the caps, but not with each other.

Have you tried to assign the group index to the position? 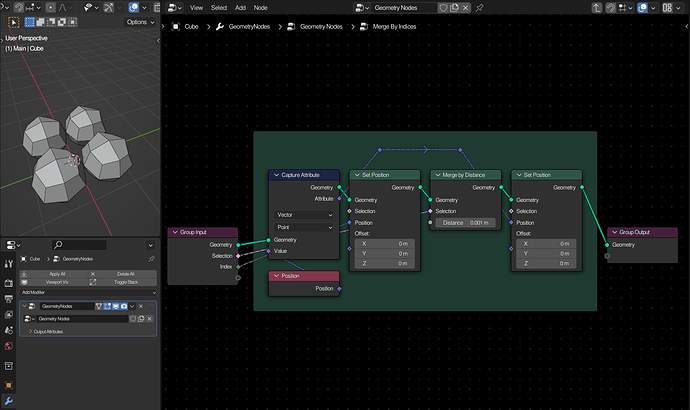 Capturing the position, setting it to the index, then setting it back will merge points with the same indices.

Then I need only capture the indices of the original geometries before joined and add them together: 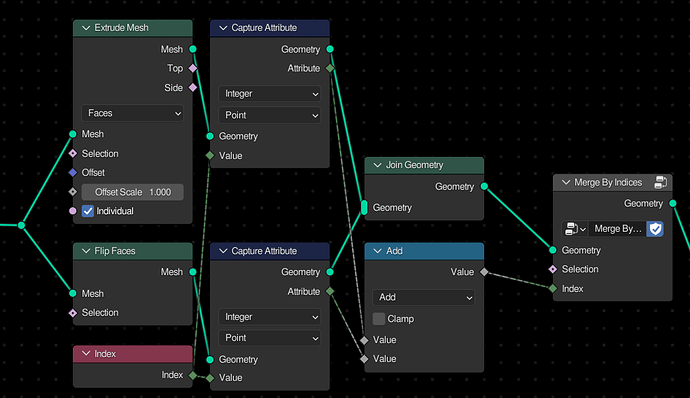 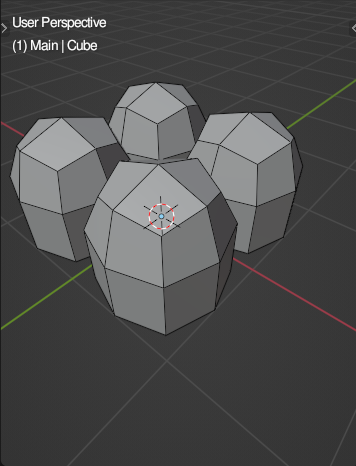 And here’s with the regular merge by distance: 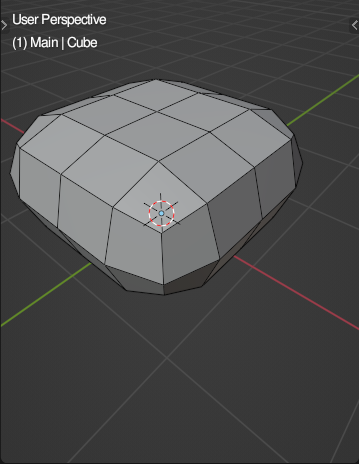 It feels just a little cheaty, but hey, it works!

A post was merged into an existing topic: Precipitation with Geometry Nodes

That’s clever. Still, a generic merge node would be nice. It would have a single group index input -all elements sharing a group index would be merged together. No need to build kdtrees and all that, probably a good performance saving

Hi folks, thinking some more about this… I wonder if the following would seem useful ? →
Instead of having a “merge by distance” node (or in addition to it), what about splitting the merge functionality into its own node, give it an input where the user can connect anything (a sort of “merge index”) and make the kdtree (or whatever structure is used to store proximity) accessible on its own (new node) for other purposes? I wonder what these could be. I’m thinking geometry generation : creating faces or lines/curves between groups of points…
@HooglyBoogly you probably have other things on your mind right now,… but how does this sound to you? do you think it would open the door for new things?

Kdtree, closest element that is not self would be dank

oh or return a geometry that is points !!
input index-> output that points data if it exists

A post was split to a new topic: Precipitation with Geometry Nodes

3 posts were split to a new topic: Aligning a texture along a GN curve