Report with the blend file. I suspect it might still be caused by the double evaluation. This will need an attribute capture node to fix but this can be unintuitive to know where to place at first.

About 12mins into Simon’s live stream, he talks about capturing attributes.

Half the posts in this thread need to be compiled into 1 big video tutorial explaining how to achieve the most commonly desired basic effects. I’ll never understand how other people understand these things and even if everything was documented I’d just be reading for weeks and not understanding how to combine the puzzle pieces.

Hi guys I have a problem controling the position of a material shader with geo nodes.

I create a shader with a circle. I use object coordinates and assign an icoshpere to control the position of the circle, when i move the icosphere in the viewport the circle shader moves with it, like so. 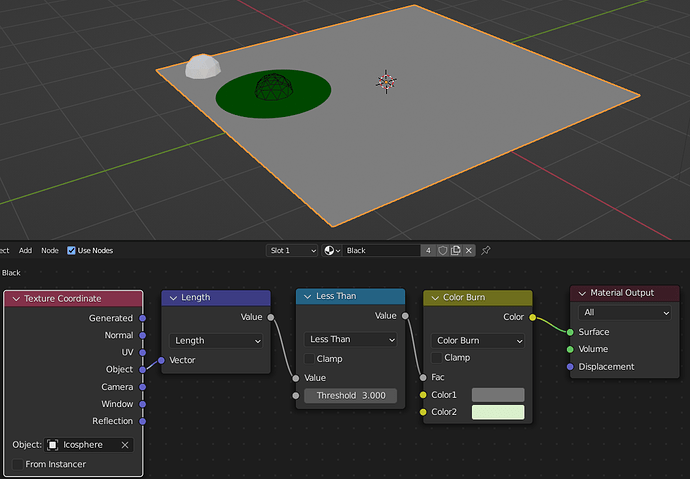 I then apply the shader to a mesh grid in geo nodes and I pull the icoshpere in with object info node. but when i try to translate the icosphere’s position in GN the shader does not move with it as before like so! 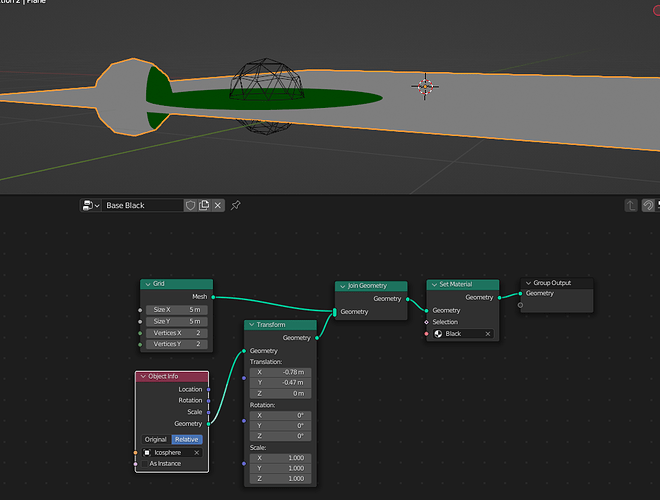 So basically i need help in controlling the position of the green circle in my shader with geo nodes. Can anybody help me please

Why do you want to use geonodes ? a shader is all you need here

one example is that i’d like to instance that green circle on points or just move it where I would like in a more complex setup. the thing i’m actually working on is way more complex in terms of shader and geo node set up’s. Just tried to state my problem in as simple terms as possible 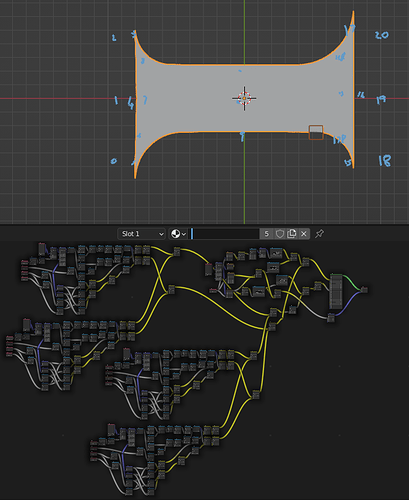 And yes i should be grouping, still learning.

Oh ok, you can’t change object transforms in geometry nodes. What you are moving is the icosphere’s mesh. 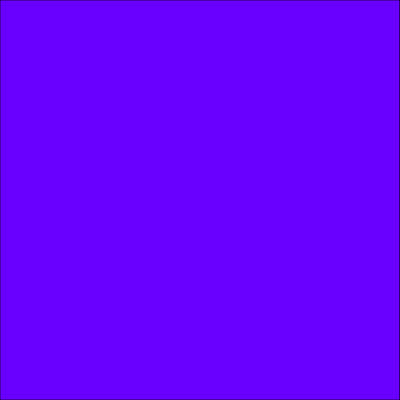 @fletchgraham
I've been making some nodes that act like sculpting tools to help with #nodevember entries. This one mimics the grab brush. It includes debug visualizations to see the falloff and direction of the grab. Planning to release these as soon as I refine them a bit #b3d #geometrynodes https://t.co/X2jgdjlG0x
14 Likes
Hadriscus November 3, 2021, 8:54pm #1975

Hot damn. How do they make it react to cursor hover ?

Oh wait, they don’t. Well, still cool asf. And a perfect candidate for mocking up HOW gizmos should interact with nodes in the future !

If you look closely, I don’t believe they do. The cursor is simply sliding a vector. The really awesome part is the visualizations. Those could be done with raycast or attribute proximity.

I wonder, if gizmos are implemented for working with nodes, would that count as nodevember friendly? Where will you draw the line between modelling and nodes? What if all the actions you do in edit mode are stored as nodes?

So basically i need help in controlling the position of the green circle in my shader with geo nodes. Can anybody help me please

As Hadriscus pointed out, geonodes are not altering the object-coordinates. At some point in the future there will be another nodesystem to allow this (but that’s only being planned so far).

Anyway, what you could probably do as a (kind of ugly) workaround would be to vertex-parent e.g. an empty to a vertex of your Icosphere and use the empty for the texture-coordinates. Not elegant, but should work.

I think anything procedural applies. Selecting a couple vertices by hand would be out, but selecting those same vertices using a rule (eg through the selection output sockets in geonodes) counts.

Houdini stores every action as a node, but the user can totally use the viewport if they want, it just won’t be as procedural as it could.

Thanks so much will give it a go, seems like it would work.

You make me think a lot. I’m not used to it, so bear with me…

Assuming “procedural” (in the context of digital creation) means “that which goes through a number of operations, each building on the result of previous ones and not involving hardcoded variables (aka manual operations) to determine meaningful changes”, I think it’s ok to use empties to control the shape of a procedural asset (some artistic control is fine, if only to present the work in the best light), but if manual placement of empties is necessary to actually build the shape, then it’s a little out of bounds.

Of course I don’t really think it’s important, but it’s interesting to think about nevertheless

I wonder, if gizmos are implemented for working with nodes, would that count as nodevember friendly? Where will you draw the line between modelling and nodes? What if all the actions you do in edit mode are stored as nodes?

You are getting too caught up in what’s fair and what’s not. I believe too many of those nodevember veterans are focusing on how they can make something procedural, and how much better it is from other people’s creations. Nodevember is supposed to be a challenge, not a contest. The question should be, is it fair to you?

Here is my philosophy on proceduralism:

If something is useful, saves you time, and is able to be changed/seeded later, it’s procedural.

If your creation relies on hardcoded values (or empty locations ) other than simple inputs, doesn’t that defeat the point of making something procedural?

When I create a project, I try to create a useful nodegroup or two every time. This allows me to grow and improve, and get better in the same amount of time. This is the power of proceduralism.

I see nodevember as an opportunity to make a routine of creating something every two days. This will break my habit of deciding my art is not good enough for people to see, and deleting it before I have a chance to fix it.

So decide for yourself why you are doing this. And above all, enjoy it.

Hi there, I’m trying to sculpt a “mountain” over a terrain using a raycast node.
It works but I would like to add a kind of fallof in order to smooth the transition between the terrain and the mountain. I tried with some colorRamp but without succeess.

Do you guys have any ideas ? 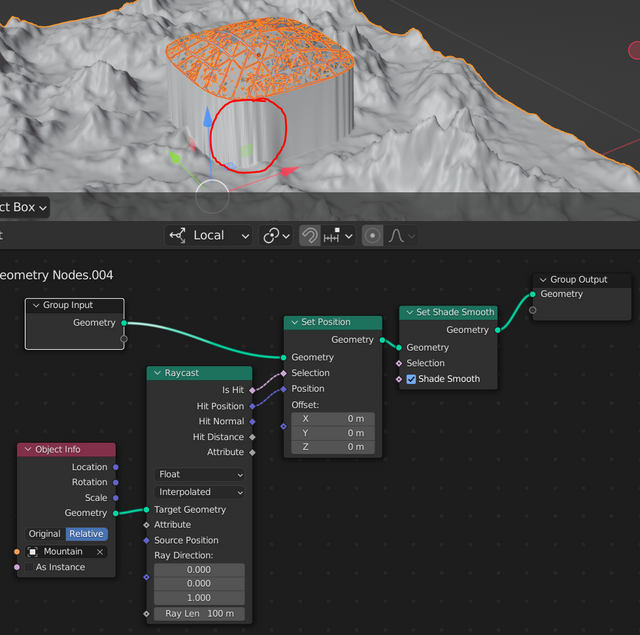 I generally try to avoid using tools that involve the viewport. But it’s fine if someone else considers using the viewport to set values on the nodes to be ok.

What would be opinion if somebody used several empties to basically sculpt in the viewport using those nodes? You could technically do the same thing by editing the values.

If your creation relies on hardcoded values (or empty locations ) other than simple inputs, doesn’t that defeat the point of making something procedural?

There is nothing “not procedural” with using empties. In fact you can even argue they are more interactive. It’s just that I personally think that beauty of Nodevember is that at the end you get pretty much a series of steps which generate an artwork out of pure logic and math.

But again, that’s my personal opinion. If you think everything procedural fits into nodevember, thats fine too. Even the official website only requires your entry to be “procedural”, everything else is optional.

Here is my philosophy on proceduralism:

I like this philosophy, not applying particularly to nodevember but in general, if proceduralism is useful and effective it is great, but sometimes it is more effective to model geometry, or use an image texture (to analogue with shaders.)

I do love playing around with nodes though