This is the first game I ever made, except the moving cubes one in the wiki. I made it for the 4 second games that someone was putting together but never finishe because they said they were waiting for some fixes.

You will get bored with this after about 30 seconds! But maybe it is of some use to someone? 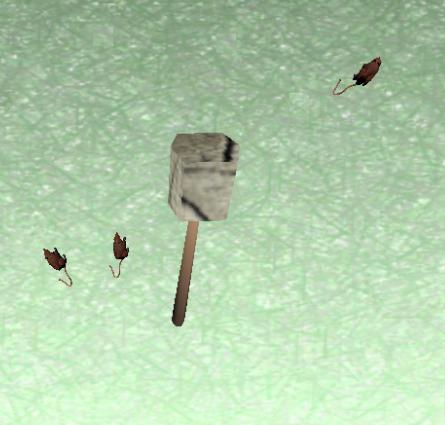 This is the first game I ever made:o

Hey, you have to start somewhere:), and your game doesn’t look that boring;)

thanks, I think I made back in april, maybe. I learned a lot from making it. I think now the club should be a big boot!

Yah, as long as you learned something new it’s good.

lol, yeah, I had a bunch, but it was too hard to win in 4 seconds or whatever the quota was. Glad you had fun with it.

Lol, this is way better than my first game.

I have to give credit to lostinspace too, when I got stuck he helped me out, a bunch!

haha this is great

Thanks, I was told it was too gory, killing those little mice… but one of the other games was a duck shooting one…that didnt seem to bother anyone, LOL!

This is a fun little game, thanks for posting it.

This is a fun little game, thanks for posting it.

HAHAHAHA. I made the hammer bigger and made like fifty mice. Awesome game, thnx for sharing!!

Laughing, Wunderlust, youre welcome. Did you have any problems with them getting stuck, or piling up?

Or did you just ignore that and smash 'em?

i dont know… just so much blood and mice. ja ja. you need a crunchy sound to play when you kill them.