Getting property clash pop up

ran into a wall - was using constraints with drivers to move equipment around to slots on the rig. The rig is Autorig skeleton. and the constraints with the simple drivers enabling the “weapon switch” worked well prior. But … then fidgeting with the driver on an arrow caused any mouse button selections to force a “pop-up-message” The pop-up message blocks any attempts to interface with blender. I even tried upgrading blender to a newer version. But no joy… Attached is a screen shot of the issue regarding “Property priorities” … Any fixes, recommendations appreciated … (edited) 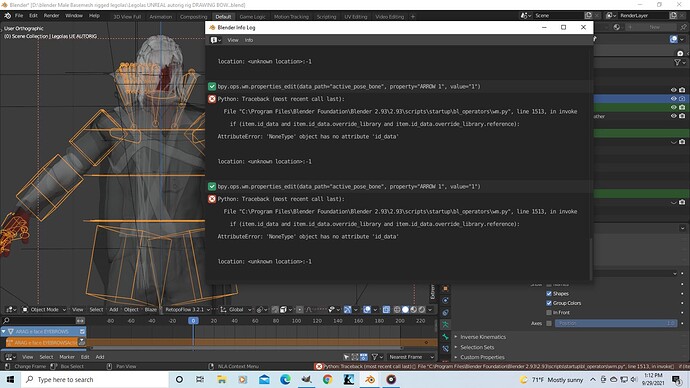 Also - Even deleted the entire skeleton rig. But no change. Pop-up still appears.

I then DOWNLOADED A NEWER VERSION OF BLENDER. Installed that over my current version. But again, pop-up still is there.

Perhaps a conflict with an addon you recently install? Try deactivate addons and see what happen.

Tried removing the add-ons. No joy. However, what I happily discovered, is that if I use CTRL + Select I regained my ability to select and work in the work window. Its a slight pain in the ass, but its working. I still cant believe, even when I removed all copies of blender and did a fresh re-install the problem still remains. Thanks for the feedback, bro

when you remove a blender installation, there is always a folder with settings in your user folder left.

Where is the settings folder located?

depending about the os you are using…

windows 10. You dont have to respond. I can chase it with what you provided. Thanks