This was a speed render I did after I first downloaded the MB-Lab addon for Blender. I didn’t trust my self to make an appealing character for my first project, so I went monstrous instead!

I made this scene (including the silly little knight model) in about six hours in Blender EEVEE. I did a tiny bit of post processing in Blender’s compositor but no external enhancement.

The rocks and mist are actually asteroids and plasma textures from Gleb Alexandrov and Aidy Burrow’s Space VFX course, which I used because it was what I had on hand at the time and it created a nice otherworldly aesthetic. I created the red and blue colors with point lamps. I particularly love the mist and jagged rocks along the top edge, and massive hand poking out of the mist in the top right.

It’s a little janky but it’s a one day project so who cares! 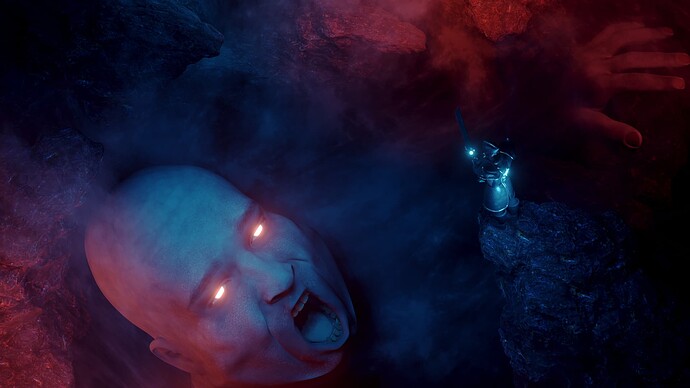