Giants in the Earth Scene G2 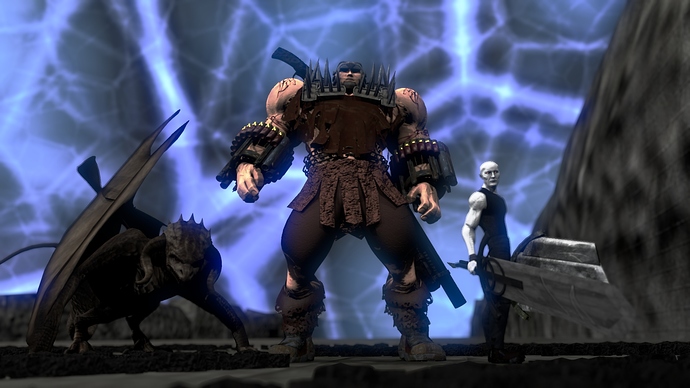 Scene G2 of Giants in the Earth is finished! (8 months in the making…)

Lance, endlessly haunted by the memories of Breanna, is called into his first mission as a warrior for Erebus. They must destroy Utgard, an old fortress of Oden. All Oden’s fortresses are now covered with the ‘dense myst’ – an electrostatic shield to protect from assault. Therefore- the team must first disable the shield so Lance can call forth meteors and reduce Utgard to cinders. Little do they know they discover innocent life in this place.

that was really really great!

I KNOW this must have taken a lot of time and hard work to make, but it (along with your other videos) feels very rushed and amateur. The thing is, I have a hard time pinpointing exactly what it is. The script and voice acting is a part of it, but I’m putting that aside because I know it’s hard to come by good voice actors, and it really is’t the main problem. Even the pacing feels weird, the way the clips are tied together doesn’t always work, and I would have had almost no way to know at the beginning that that was a memory. The music also feels really awkward and cuts off. While the character models could be better, I feel like the textures are more to blame. These characters are in DIRE need for better texture work, and some SSS wouldn’t hurt (I don’t know how that would affect the render times, but I think you should try and get them looking good first, then adjust things for render time). But upon thinking about it a little more, it couldn’t JUST be the textures, because even scales looks bad, which can only be because of the lighting. In a lot of scenes it’s just completely blown out, with 100% black on one side, and near 100% white on the other this looks really unrealistic.

But great job, I hope I didn’t put you down, I just want to give you some advice for improvement. You have something that a lot of other people don’t; work ethic. It is a ton of work you’re putting into these, and I hope you keep working, but in the end quality outweighs quantity and hard work. I challenge you to 1. make your renders look better, and 2. work on your storytelling (camerawork, lighting, etc…). At this point, I actually would say that making films without voice acting would have been the best choice (to focus on visual storytelling), and you likely don’t want to change now, but don’t let your past projects keep you from improving, after all “a foolish consistency is the hobgoblin of little minds” - Henry David Thorough.

Thanks dude. All your criticisms are spot on and how I feel myself. But ultimately, at this point,my goal is what I call a rough draft. There is just no way I can get the whole thing out at Pixar quality, but I can at better than transformers beast wars quality. Ultimately, at each video, I want to improve something. This one, what you can’t see on the backend, is about halfway through I added face rigs for lance and Ryan. I remodelled lances face, and I really focused on a few key moments of animation (I won’t say which). Someday this may fall to the side, someday it may get noticed, and a whole team can work with me on a finished piece. Until then, I’ll just plod away, hoping that each episode improves on something. I can’t tell you what.

My greatest appreciation is that people watch. I am truly amazed that someone would devote 13 mins of internet time to my little exercise in melodrama. So thanks very much!

For those interested, the flying gargoyles is available on Blendswap: