Gills on a Shark - What's the best method?

Could someone point me in the best direction to add gills to a shark. I have my basic model (first model ever created) of a reef shark, but I need to add gills and a mouth. I have a face designated for the Gills, but I’m not sure what to do. Should I just include the gills in the Texture, or should I somehow carve up my square to add 5 gills? Oh, and I haven’t even started on the mouth yet.

Any help is very much appreciated. Like I said this is my first model. I did play around and drew the shark using only vertexes just to get the feel of blender, but this official first model of mine is from a cube. 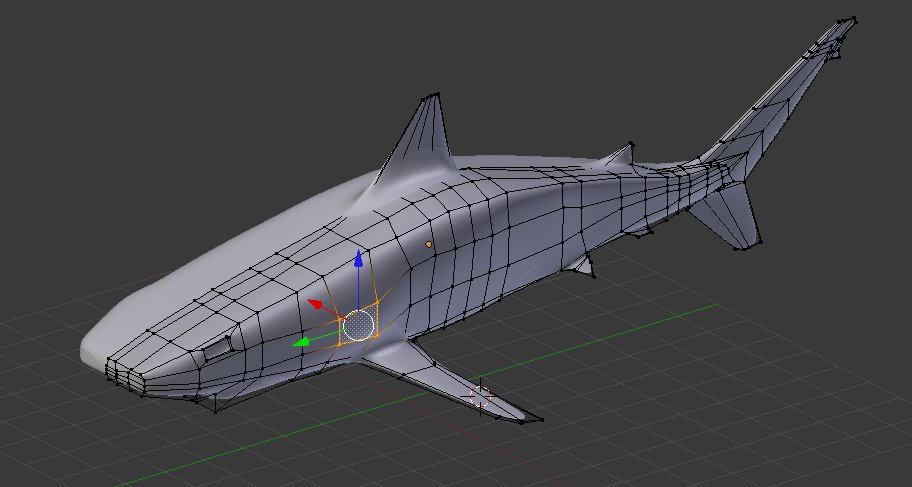 do they have to be really detailed? if you know how to UV map you could ‘suggest’ them with a simple painted normals map. to model them in would create alot of faces. you would have to add several edge loops. one thing you can do is, model it as much as you can without the gills, then add a couple of levels of subsurf, and apply the modifier. then you would have a denser mesh, with which you should be able to extrude gills inward. also the ripping tool could be handy ( V key ). yet another alternative would be to copy it, give it a multires modifier, ( in recent builds making a copy is not necessary btw ) sculpt in the gils, then bake the normals to the low poly version. also, i’d like to point out that his sides could be a little more rounded, imo.

I guess they don’t have to be really detailed. End model will go in a game. I’m 100% new to Blender, so I don’t know much yet. Put it this way, I don’t know how to add a texture yet and I tried to sculpt but nothing happened. So, I’ve got a ways to go. I’m not sure how detailed I will make it because it’s going into a game. Here’s my basic thought process for this: model shark to be fairly realistic, add textures that might lean to the cartoonish side, add rigging in either Blender or Unity (or both so I can learn both). Player will control the shark - maybe first person or third person view (or multiple third person sort of like a car driving game might have).

So given all that, I need to learn Blender. It’s probably best if I make it as realistic as possible so that I can learn as much as possible, then make another one that is more cartoonish, or figure out a way to transform it to more of a cartoon.

most likely sculpting didn’t work because the mesh is still quite low poly. first thing to do is add a multires modifier, so you have a denser mesh to sculpt on. give it a couple of levels at least. then sculpt. in the sculpting buttons set it to mirror along the x axis, so changes you make will be symmetrical…

Here’s how it stands right now. Still no eyes or gills. I did make it more rounded, like all the videos and pictures I’ve been watching on reef sharks (grey reef, black tip reef, and caribbean reef). 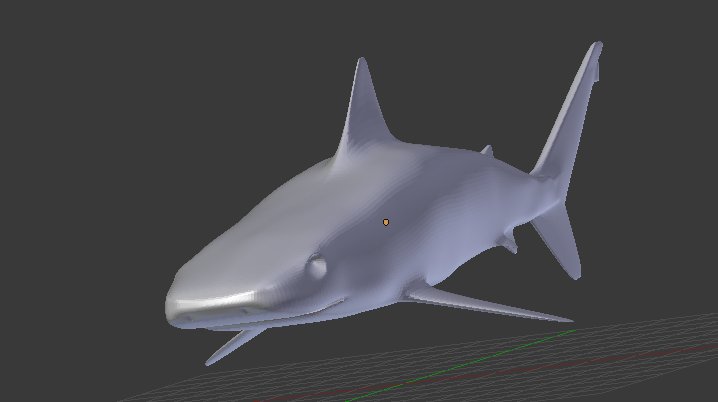 I think I might search out a Sculpting tutorial and watch that. I appreciate the comments.

it looks like you’re making good progress. just focus on one thing at a time, and after you learn to add a material, check into UV mapping / unwrapping / texture painting ( all part of the same process ).