I want to make credits for a short movie. I want the letters to move from bottom to top over a still picture.

Now, I have several sequencer strips:

I’d like my letters to glow, but not the background image. I tried several combinations, such as

Glow applied to Scene.
Alpha over (Scene & Image)
but this shows the un-glowed letters

Could anyone help me out by telling me in what order I should put the strips / what configurations I should use? Thanks a loT!

I think using nodes would be more appropriate here in terms of controlling what glows and what doesn’t. Can’t really help you with the VSE; I always use nodes instead.

Thanks, I thought about that too, but, the glow in the node editor always looks a bit odd to me, so if it’s possible to do it with the sequencer, yes please

(I already tried to render the letters + glow apart, and wanted to paste them over the image as a movie file in the sequencer, but is there a movie-format that supports alpha? I did it with .png, as I thought I could load all 540 individual frames with “Image sequence”, but I was mistaken…)

Well… Acting after a tip from a girl from my class: Just try again. And it worked

Which means I don’t think I need any help anymore, but I thought I’d post a screenshot so others who might encounter this problem as well might be helped.
Thanks for the effort, blenditall 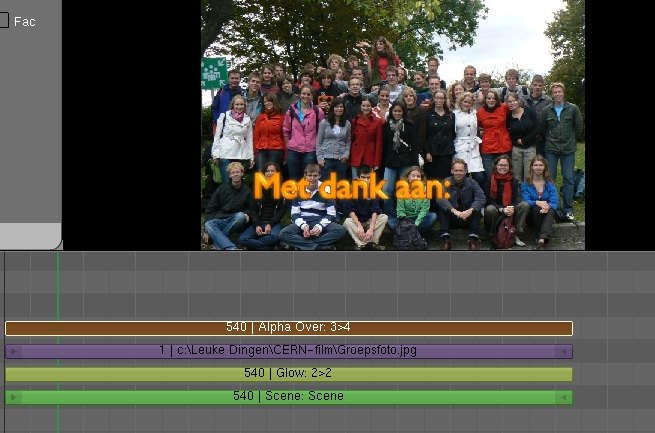