Project name: Godiva
Date: Apr 2, 2008
Author: Igor Kekeljevic, Admiror design studio
Modeled with Blender 3D 2.46 RC1.
Rendered with Blender Internal Renderer + Compositing nodes for diffuse glow effect and camera focus blur. Clouds in the background and flare done with particles and halo shader.
Story: First idea is based on understanding of machine like symbol of male strength and energy. I combine machine with woman figure to make a contrast and force starting idea. Scene reminded me on a story about lady Godiva, so I call this project Godiva. 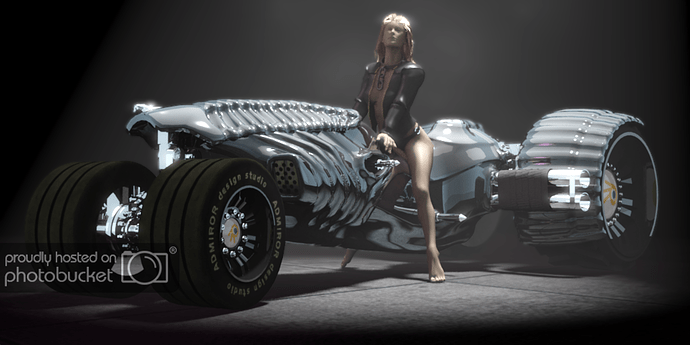 kekeljevic, I really like this scene! Its a very interesting combination of contrasting elements that conveys just the right amount of subtle beauty-n-the-beast “conflict” in the viewer’s mind. You mentioned the “male strength” element, but I think the sort of dangerous “alien” / “skeleton” aspect of the vehicle design is almost more visceral in its contrast with the soft, tender beauty of the woman. While I’m not too attracted to the vehicle’s design itself, it certainly conveys a powerful message.

From a technical perspective, I also like how you’ve almost abstracted the chromy reflection to make it a little more believable considering the scene environment. Where this falls apart somewhat is on the front axle/differential mechanism. In this area there’s also a puzzling gap in the left-most wheel that shows the floor behind where it doesn’t seem that it should show. [EDIT: oh, wait… that’s a chrome reflective brake disk, I guess… whatever, it doesn’t work.]

Crits are: fix the chrome on the front axle, lose the blender logo & front tire text (reduces your artwork to being an ad…) and back off the blur/glow just a tad, and I’d say you’ll have a winner!

(And dang, put some protective gear on that chick, asap! …j/k, I like her outfit, but keep that beast turned off while she’s on it, eh?

I personally would have kept it purely vehicle only. I think its again all about selling stuff with sex. Which i personally hate very much.

As it is, the image itself is very nice. Oddly off-focus, buts still nice.

Since there’s some crits already, I just want to say that it seems that you put more work on the rider than the ride :P. I’d kinda like to see more contrast (colour) in the image, the cover of the back wheel has a large area of same colour.

The body of the vehicle looks great. However, the wheels just don’t seem to go with the overall feel. You have a Gigeresque body, with simple spoke and hub cap wheels. Also, I think you could drop the heat wrap on the exhaust pipes. I personally think seeing more chrome would not hurt. As for the girl, the model looks familiar. Have you posted her before?

Be gentle… this is my first serious project. I’m in 3D graphic for a short time, so I’m not so experience as you guys. I admit that I spend more time on a girl than on a vehicle. I didn’t know that modeling of face and hands would be so difficult (lucky for me I didn’t need this model for closeups of animation

).
Technical stuff for vehicle and realism didn’t interest me so much. Mine main aim was to get the right mood of image. I wanted nice and exciting mood of 80’s movies (back to the future, alien 1, terminator 1). About selling stuff with sex - in art everyting is alowed… until it’s inside of good taste. I just can’t remove women from vehicle. They need each other or I lose a story . Image is nothing without a story…
Thank you all for responds… a apriciate them…

Brrrr…naked skin against cold chrome? That chick must be freezing.

No need to be concern… I made a leather seat.

Brrrr…naked skin against cold chrome? That chick must be freezing.

You should have seen her in kekeljevic’s first version! :eek:

I liked both versions but I imagine this one brings the focus back on the car rather than the woman (although many guys find partial clothing sexier than nudity). Nice work!

I personally would have kept it purely vehicle only. I think its again all about selling stuff with sex. Which i personally hate very much.