I’m doing a caricature of my son. I’m trying to get a pixar feel to it. So far I have just the head. Any thoughts? 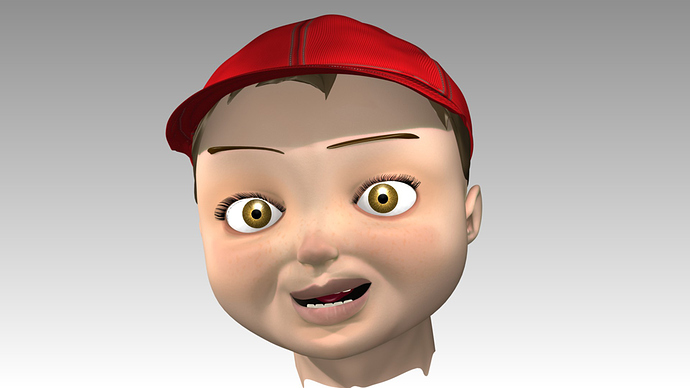 you have a really good start check out these reference images.

You are already super close its almost as if yours is too real, just take the obvious features and magnify them a little to give it that personalized quality. Bigger eyelids and the skin tone are the obvious differences, your close I am sure you can do this. 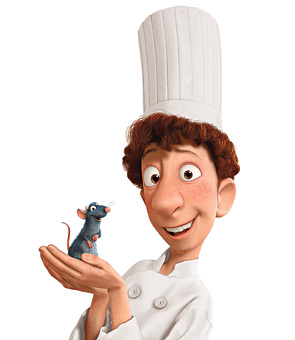 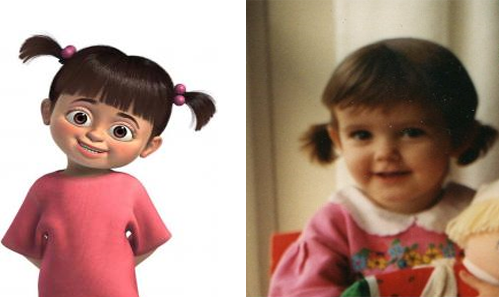 Thanks for the input - The eyes are tricky. I’m trying to make them bigger to make his face more playfull without it looking freakish… Very tricky. Any tips on this in particular?
-rich

his eyes, well, his whole face, could use a bit of the cartoony stripping away of unnecessary features that pixar does, and really, any good cartoonist. Cartooning is simplification, and, in the words of John K, ‘removing anything that isn’t fun’. So I’d strip down the eyelashes, or make them thick enough to look like one shape (or several seperate shapes, but not a whole lot of individual fibres) and stylize them a bit.

simplify the head shape a bit, too. make it more whole and appealing, smoother with less warps and shifts in the silouhette. Actually, do that with all the face shapes, especially the lines and wrinkles around the mouth, right now they’re too deep and angular, and have a older, more realistic look to them, which is an odd thing to see on a cartoon child. Smooth them out and curve them down. simplify the little crooks, or even erase the creases completely except when he’s smiling.

the lips are definitely a problem, they’re full and thick and dark and masculine, they have highly detailed wrinkles. kids lips are much softer, lighter, and less defined, and this is a cartoon, so you don’t want that hyper-real detail, anyway.

the eyes have a subtle problem in the irises. the human iris does not bulge out, it’s actually flat, but the cornea (the lens over top) distorts the appearance of the eye and the light coming through it, and makes it appear to curve SLIGHTLY inward, and pixar does this anyway (curves the iris inward) to give the eye an appearance of depth, which is vital to a good, believable, personable eye.

already mentioned is sub-surface scattering, although this is not necessary and was not used as far as I can tell for Boo in Monsters Inc. In her case, the texture was more reliant I think on rich colours and sparse detail to prevent the eye from getting lost in the pores and from the brain to mistake it for human skin (which would be creepy stretched over a cartoon face like that)

sorry, i don’t mean to say such thing in my very first post here, but i think the problem make you feel a bit freakish is his mouth.

hmmm just don’t look into the mouth, then it’s okay. make his eyes rounder and look carefully of the references.
here i make a very rough image from your origin image, and i hope you won’t mind :rolleyes:
i just moved right eye to left and left side to right, and i think it looks better. but hey! he’s your son, so… just suggest lol

for me, my suggestion is find some reference and replace the cutest part which you like most to your image, shape it in your gimp and then fix it in blender later.
but still, you already get a great start, just few fix would make it better 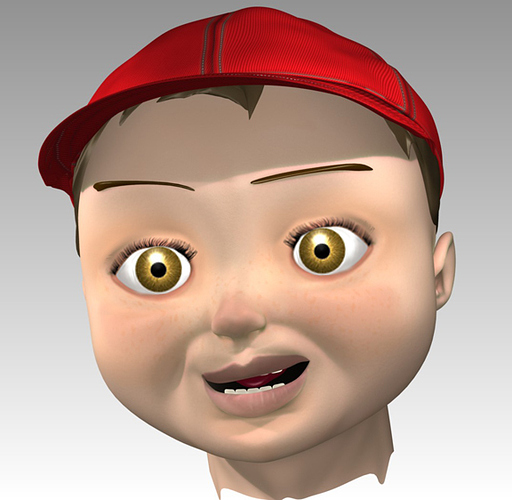 Wow! Thanks for the outstanding feed back - I’m gonna work on this and repost soon!
Thanks!!!
-rich

I made several adjustments: 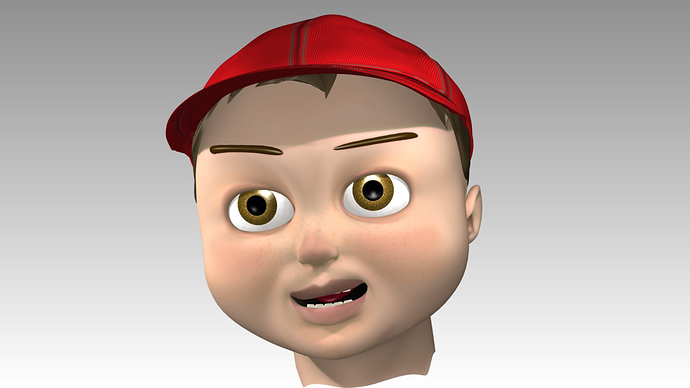 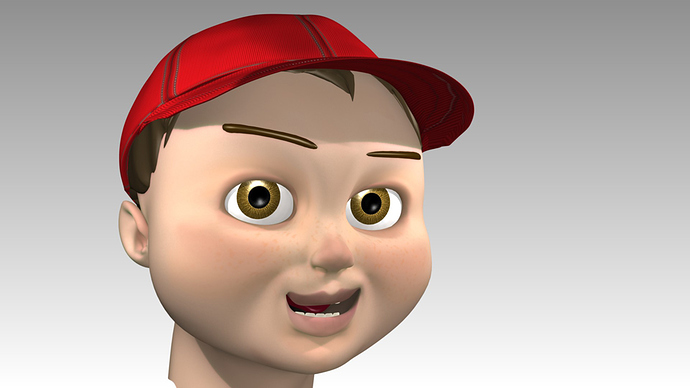 This morning I fiddle a bit more. It seems to look much better head on than at any angles. Also I added the spec map back in t give it a little highlighting here and there.

Question about the rest of him. Is it better to continue creating the body from the same mesh as the head or should I create a new object for the body? I do plan to rig him for posing but not necessarily animated (but you never know)…

Thanks for all the great input! All is appreciated! 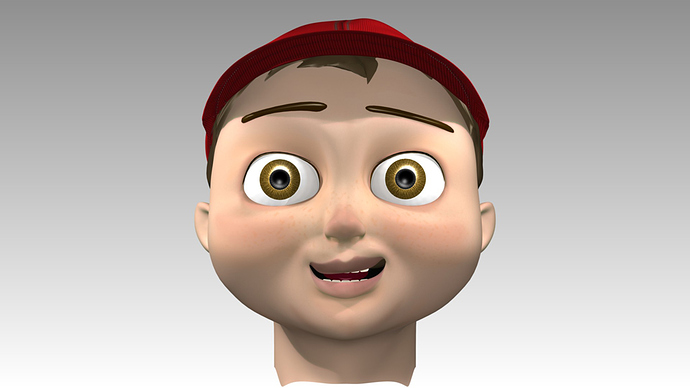 Okay, I think the eyes needs to be redone. the pupil shouldn’t have any spec at all but simply be just pitch black. I got these good results down below by following a great simple tutorial in blender noob to pro. You should really check it out and try to make the eyes that way. 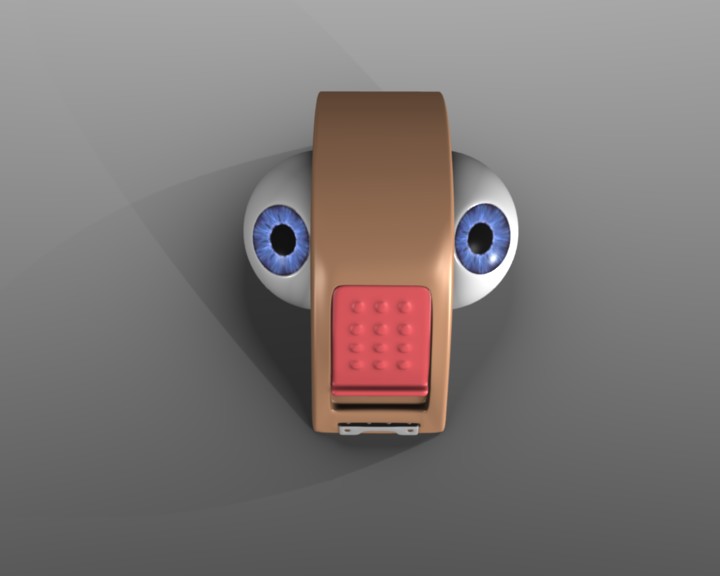 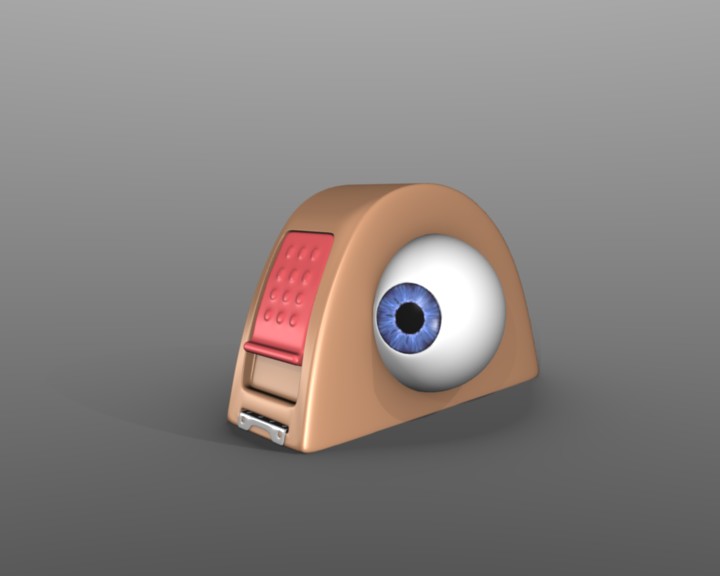 The lips area a little freaky, smooth them out a bit. Look at the lips on the images skateboardkid posted, they pinch down in the corners but there’s little if any definition of the divot in the upper lip. Also his eyelids need to be more clearly defined. Pixar tucks them in there tight but you can see where the geometry folds over itself like real eyelids do when they’re open. You might have too much open forehead as well. Pixar tends to fill their open foreheads with hair unless the broad forehead is a big part of the character design.

Thanks for pointing me to that tutorial. I’ve done a few eye tutorals but non have given me good results. This one is great. Thanks you!

PS: I loved your desk film! 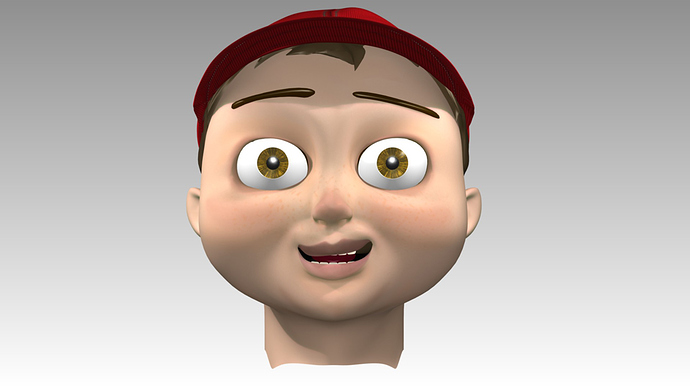 The lips area a little freaky, smooth them out a bit. Look at the lips on the images skateboardkid posted, they pinch down in the corners but there’s little if any definition of the divot in the upper lip. Also his eyelids need to be more clearly defined. Pixar tucks them in there tight but you can see where the geometry folds over itself like real eyelids do when they’re open. You might have too much open forehead as well. Pixar tends to fill their open foreheads with hair unless the broad forehead is a big part of the character design.

I think I’m at the fine tuning stage with the head. What do you think?
Also, any suggestions on the body in terms of approaches? All a single Mesh?

Thanks for all the help - It’s been invaluable. 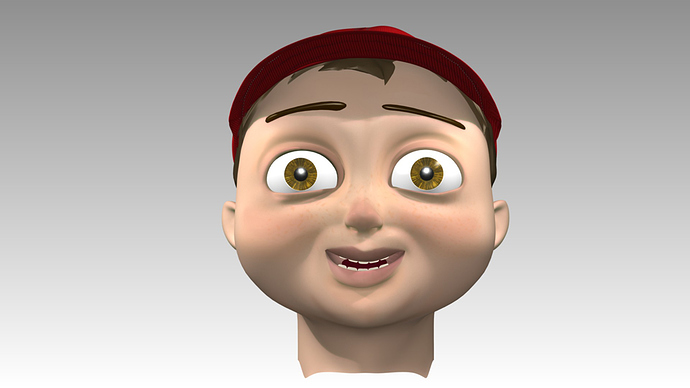 The image could use a higher OSA setting for your final render (those jagged edges pull away from the smooth pixar look).

The eye’s are a little too close together. A general rule of thumb is to have the eyes one eye’s width apart. You can make them a little close than that, but at the moment he looks a little funny.

The ears are too low. Even in cartoon stylization, genrally the top of the base of the ears starts at the center of the eyeline.

I would add subsurf scattering as moffboffjoe suggested.

As for modeling the body, I would suggest extruding from the neck. It comes down to a personal preference, there are certain advantages to either method. If you box model the body as a seperate object, you have to be careful to count your verticies so there are the same number in the neck reigon for when you want to attach the head. I find that if I extrude from the neck, I get much better topology as well.

Looking good! Keep it up.

I think lighting might be whats really detracting from your image now. Notice all the shadows in the pixar images above are very soft, yours are pretty hard. Lighting done poorly can make an awesome model look terrible, or a very simplistic one look very professional. I also am sure those pixar models are very post-processed. Nodes here we come!